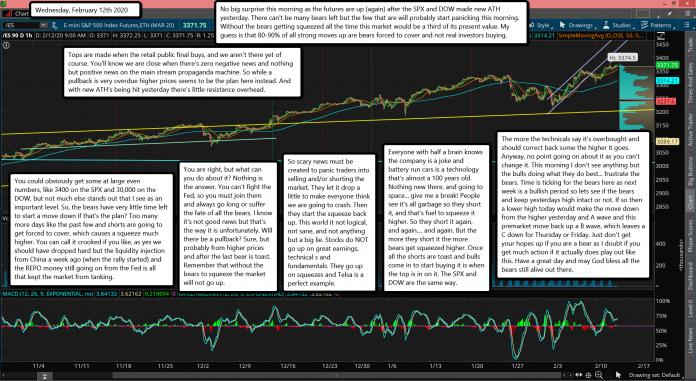 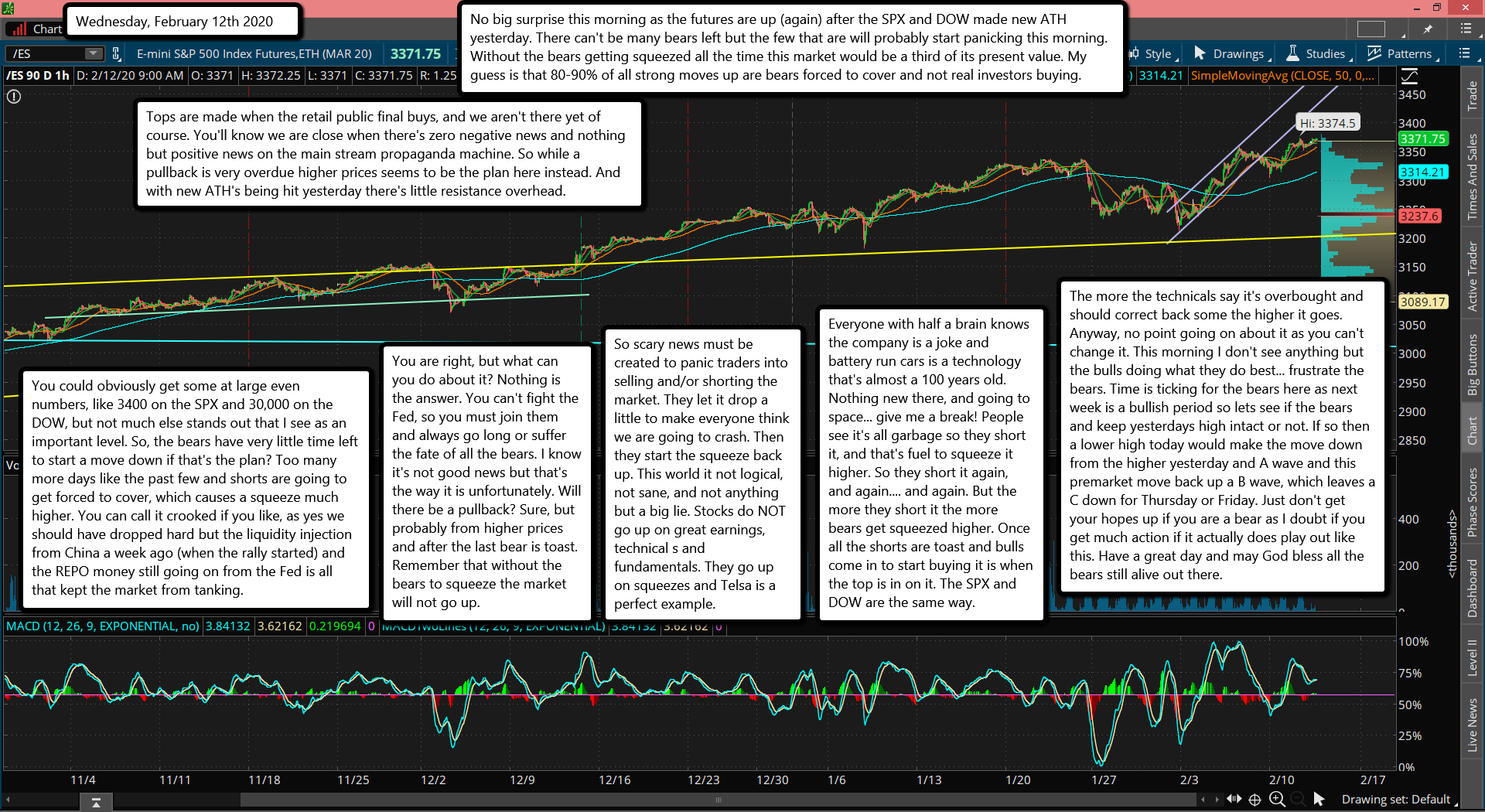 No big surprise this morning as the futures are up (again) after the SPX and DOW made new ATH yesterday. There can't be many bears left but the few that are will probably start panicking this morning. Without the bears getting squeezed all the time this market would be a third of its present value. My guess is that 80-90% of all strong moves up are bears forced to cover and not real investors buying.

Tops are made when the retail public final buys, and we aren't there yet of course. You'll know we are close when there's zero negative news and nothing but positive news on the main stream propaganda machine. So while a pullback is very overdue higher prices seems to be the plan here instead. And with new ATH's being hit yesterday there's little resistance overhead.

You could obviously get some at large even numbers, like 3400 on the SPX and 30,000 on the DOW, but not much else stands out that I see as an important level. So, the bears have very little time left to start a move down if that's the plan? Too many more days like the past few and shorts are going to get forced to cover, which causes a squeeze much higher. You can call it crooked if you like, as yes we should have dropped hard but the liquidity injection from China a week ago (when the rally started) and the REPO money still going on from the Fed is all that kept the market from tanking.

You are right, but what can you do about it? Nothing is the answer. You can't fight the Fed, so you must join them and always go long or suffer the fate of all the bears. I know it's not good news but that's the way it is unfortunately. Will there be a pullback? Sure, but probably from higher prices and after the last bear is toast. Remember that without the bears to squeeze the market will not go up.

So scary news must be created to panic traders into selling and/or shorting the market. They let it drop a little to make everyone think we are going to crash. Then they start the squeeze back up. This world it not logical, not sane, and not anything but a big lie. Stocks do NOT go up on great earnings, technical s and fundamentals. They go up on squeezes and Telsa is a perfect example.

Everyone with half a brain knows the company is a joke and battery run cars is a technology that's almost a 100 years old. Nothing new there, and going to space... give me a break! People see it's all garbage so they short it, and that's fuel to squeeze it higher. So they short it again, and again.... and again. But the more they short it the more bears get squeezed higher. Once all the shorts are toast and bulls come in to start buying it is when the top is in on it. The SPX and DOW are the same way.

The more the technicals say it's overbought and should correct back some the higher it goes. Anyway, no point going on about it as you can't change it. This morning I don't see anything but the bulls doing what they do best... frustrate the bears. Time is ticking for the bears here as next week is a bullish period so lets see if the bears and keep yesterdays high intact or not. If so then a lower high today would make the move down from the higher yesterday and A wave and this premarket move back up a B wave, which leaves a C down for Thursday or Friday. Just don't get your hopes up if you are a bear as I doubt if you get much action if it actually does play out like this. Have a great day and may God bless all the bears still alive out there.