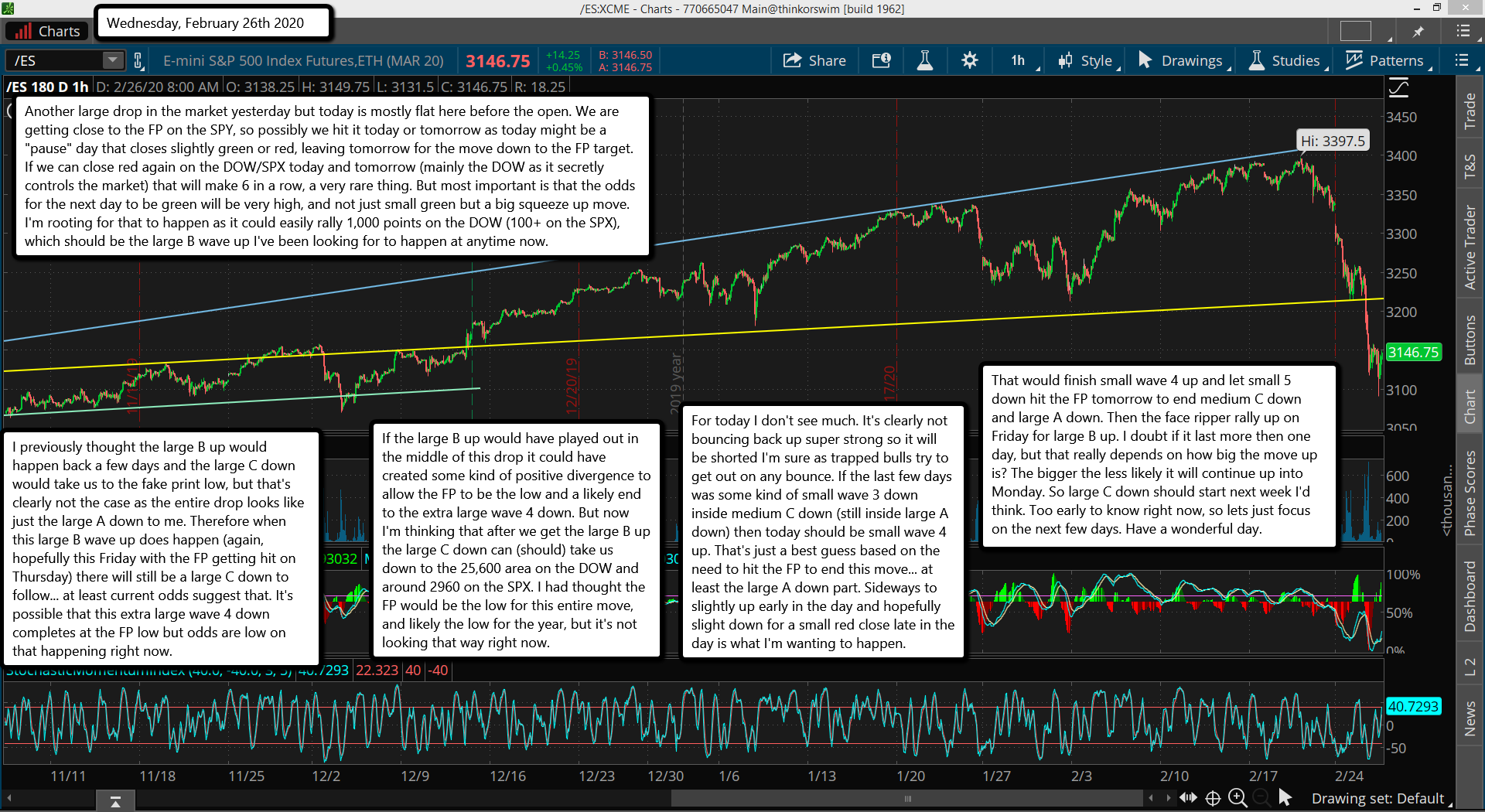 Another large drop in the market yesterday but today is mostly flat here before the open. We are getting close to the FP on the SPY, so possibly we hit it today or tomorrow as today might be a "pause" day that closes slightly green or red, leaving tomorrow for the move down to the FP target. If we can close red again on the DOW/SPX today and tomorrow (mainly the DOW as it secretly controls the market) that will make 6 in a row, a very rare thing. But most important is that the odds for the next day to be green will be very high, and not just small green but a big squeeze up move. I'm rooting for that to happen as it could easily rally 1,000 points on the DOW (100+ on the SPX), which should be the large B wave up I've been looking for to happen at anytime now.

I previously thought the large B up would happen back a few days and the large C down would take us to the fake print low, but that's clearly not the case as the entire drop looks like just the large A down to me. Therefore when this large B wave up does happen (again, hopefully this Friday with the FP getting hit on Thursday) there will still be a large C down to follow... at least current odds suggest that. It's possible that this extra large wave 4 down completes at the FP low but odds are low on that happening right now.

If the large B up would have played out in the middle of this drop it could have created some kind of positive divergence to allow the FP to be the low and a likely end to the extra large wave 4 down. But now I'm thinking that after we get the large B up the large C down can (should) take us down to the 25,600 area on the DOW and around 2960 on the SPX. I had thought the FP would be the low for this entire move, and likely the low for the year, but it's not looking that way right now.

For today I don't see much. It's clearly not bouncing back up super strong so it will be shorted I'm sure as trapped bulls try to get out on any bounce. If the last few days was some kind of small wave 3 down inside medium C down (still inside large A down) then today should be small wave 4 up. That's just a best guess based on the need to hit the FP to end this move... at least the large A down part. Sideways to slightly up early in the day and hopefully slight down for a small red close late in the day is what I'm wanting to happen.

That would finish small wave 4 up and let small 5 down hit the FP tomorrow to end medium C down and large A down. Then the face ripper rally up on Friday for large B up. I doubt if it last more then one day, but that really depends on how big the move up is? The bigger the less likely it will continue up into Monday. So large C down should start next week I'd think. Too early to know right now, so lets just focus on the next few days. Have a wonderful day.