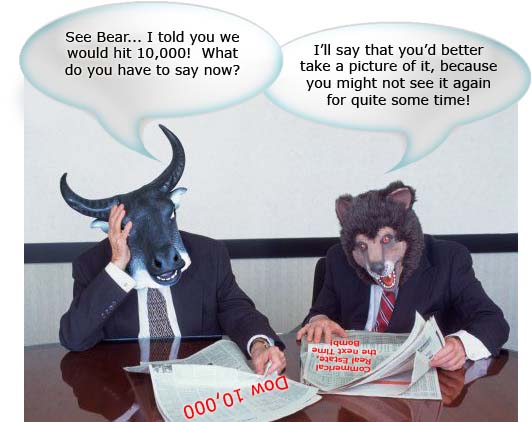 Today certain was a victory for the bears, as the bull couldn't move the market up on light volume. That's a big change from what has been going on since about August or so. In the past 3 months the up and down days were very in sync with how much volume was traded.

I believe that the top could be in already. I know that Mr. Topstep is waiting for 1108.30 (SPX), but it's not looking good for the market. Light volume days are almost always UP days, yet today was down... and not by just a little bit, but a nice move down.

The market did hold support, so tomorrow is another chance for the bulls to rally back up again. Friday's seem to be light volume days, so the bulls have another chance at a rally. But, I just don't see 1108.30 in the cards this time around. Even Mr. TopStep is now saying that we could start down from here. (Here's his latest video)...

So, I'm looking to see what tomorrow brings as I'm not sure at this time. It should be a flat day, after a sell off like today. You know how that works now... sell hard and rest for a day, then sell hard some more (or the opposite when rallying).

What worries me is that in the past opx last weeks the market would hold the current trend (which has been up since last week) and close the opx Friday at a similar level that it hit the week before (which is this week). That means that the market makers would decide in the current week (now) what they wanted to close the last week out on.

So, if they have a lot of calls that they want to collect on, and a lot of puts that they don't want to pay on, then they would whip the market one direction on the week before opx, and back the other on the week of opx. Hence the market would close out where it was about 2 weeks prior.

On Monday and Tuesday of this week we were around 108-109 spy. If they do what they have in the past, then that should be the area that the market closes on next Friday. However, it just feels different this time. Today's selling on light volume is a big change in character for them. Does this mean that next week will really produce some selling? I'm not sure yet, but tomorrow may give me some better clues.