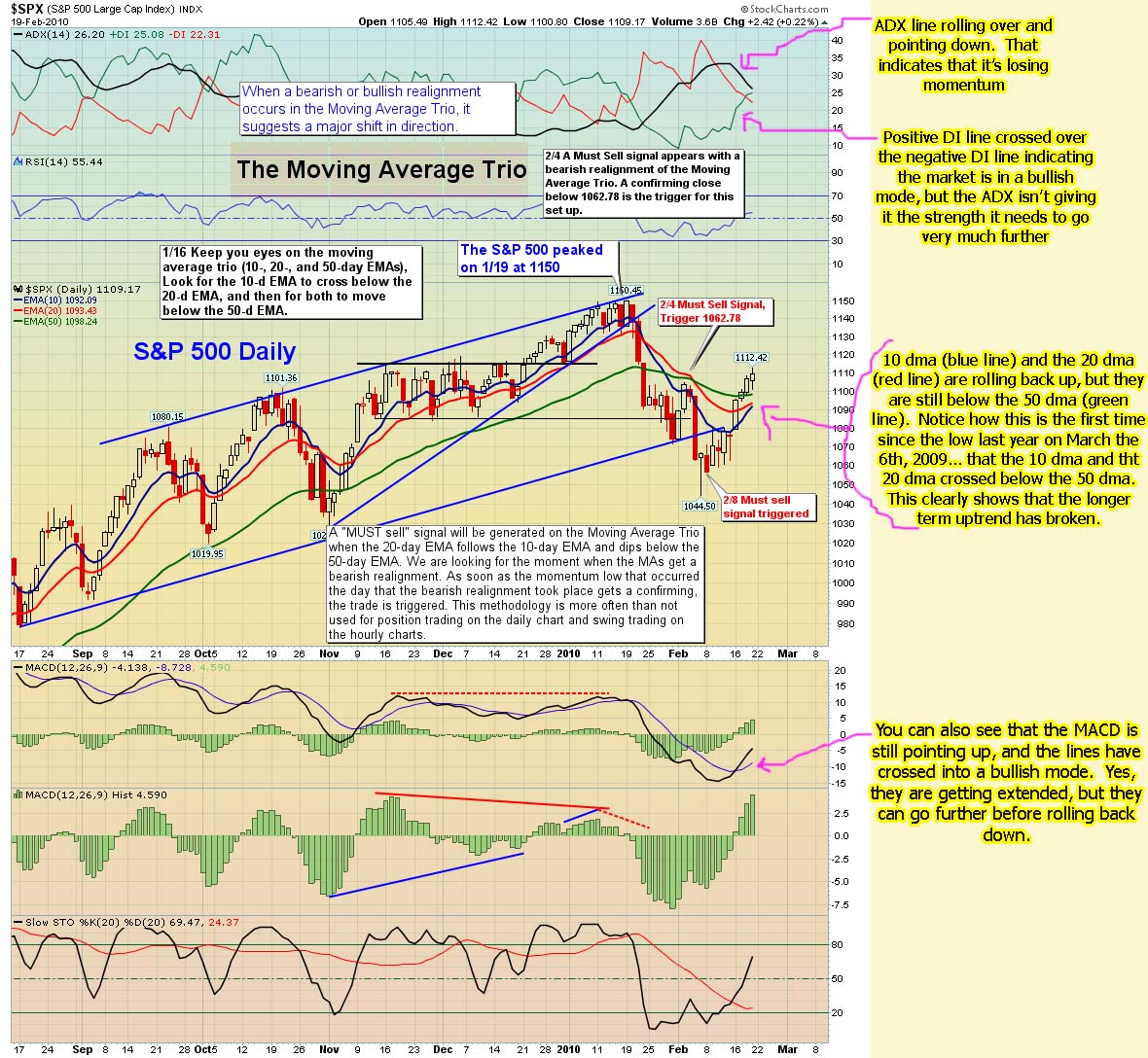 Bullish Monday again?  Yes, it's possible...  I know us bears can't seem to believe that the market could go higher, but it can.  When you look at the technicals, the ADX (advance/decline line) clearly shows that the bulls are still in control.  The adx line is now rolling over and starting to point down, just as the positive line is rising up, and crossing over the negative line.  What does that mean?

Simple... it means that the advancing move is losing momentum, but at the same time the positive di line is giving a bullishly cross over the negative di line.  This indicates that although the market itself is losing steam, the bears are too.  The di line (directional indicator) that is negative is the bears line.  When it rises the bears are starting to gaining power, but they also need the the adx line advance upwards too... showing that the momentum is also gaining power. 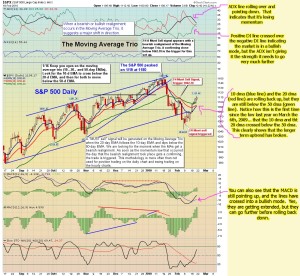 Ok, now that seems simple enough, but where does the adx line come in?  The adx line simply shows the strength of whichever line is on top.  Any time the adx line starts to go down, then the market is losing power for the current trend.  Right now, we are seeing the adx line (black line) starting to point down, while the positive di line just crossed the negative di line.

So, even though the di lines had a bullish cross, that bullish move can't go too much further without the adx line rising up with it... giving the positive di line the strength it needs to rally up some more.  That leaves us in a sideways market until the adx line starts moving back up again, giving strength to whichever di line is point up at that time.

Hopefully that makes sense to you?  This means that the up move doesn't have much further to go next week, and that the down move can't happen until the adx line gains strength again by pointing up, at the same time the negative di line must also go up and crossover the positive line.

It's all about how much strength (measured by the adx line) the market still has.  Once it loses strength, it doesn't have much further to go in that direction.  That why I'm expecting the market to be in a sideways mode next week, until the adx line cycles back down to the bottom and then gets ready for another momentum move... up or down?

This means I'm not expecting a big sell off on Monday, because there isn't as much momentum left (adx line) behind the move... in either direction.  Monday could pullback a little, or go up a little?  However, if adx line continues to roll back down, then I'd expect some profit taking by the middle of the week, but no big pullback.

A move down to the 1080-1085 level should be a good support level on any profit taking that should occur sometime this week.  This market will pullback, but it's not ready for the larger move down yet.  It appears that may not happen until the first week of March.  I still believe it's coming, because the monthly charts are clearly pointing down now.  They don't turn on a dime!  And, the weekly charts still putting in a bear flag.

The new larger trend is now down, but in the short term, we could chop around all next week, and really not go anywhere.  Here's a breakdown of where we are on each time frame...

With each chart in different trends, you can now see why I think we will chop around next week.  What we are waiting for is for all the trends to line back up in the same direction, along with the adx line bottoming... and ready to rise upward, giving fresh momentum to the trend in control.

Clearly, the monthly chart has the most power, and it's pointing down.  We need to wait for the weekly chart to line back up and start pointing down too.  Then the daily, 60 minute, and 15 minute chart would be the last to all line up.  If you can be patient enough for this too happen, then you can ride a really nice long trend down.

In the meantime, we will just have to take it one day at a time.  Let's see what Monday brings first, and go from there.  If we start to pullback at any time during this week, we should remember that fake print of 107.38 spy that occurred last week.  It could be the place that the market will bounce from?  We'll just try to remember that for when some profit taking does finally happens.

On a side note... the market seems a little strange here lately, almost like it's fight between the good and bad forces that control the market.  Maybe Obama is really trying to be the good guy here, and keep the crooked banksters from dumping their shares and crashing the market?  It's hard too tell about him, as he's clearly been a puppet for the banksters since they put him in office last year.

Is he finally taking a stand and supporting the America people instead of the crooked banksters?  I doubt it... it's probably just a political move since he and the Democratic party is losing popularity every day now (and election time is coming up later this year too).  Sorry, I still don't trust him or support him.  He's just as worthless as Bush was.  Just a puppet on a string, that's pulled by the Rockefellers, Rothschilds, Vanderbilts, and all the other familys in the Illuminati that run this world.

What most people don't understand is that the United States of America isn't broke... it's the Federal Reserve that's broke!  And they are a PRIVATE entity (bank) that owns a Private Corporation called "The United States of America Corporation".  The Federal Reserve is run by crooked banksters that want to keep all of the profit that they've stolen from American's and push off all the debts and liabilities onto the country of Americia (aka... the taxpapers).  Does that sound fair too you? 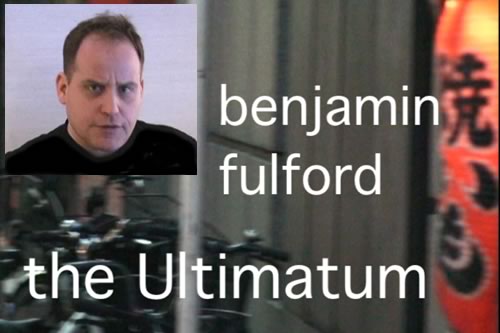 If you like to listen to an audio by an insider named Benjamin Fulford by downloading this file (right click and save as).  If you would like to go to website, the link is here.  Scroll down the page to see Benjamin Fulford's link.  He also did some video's and they can be found here.

Many of this things haven't happened yet, which tells me that there is a fight between the good patriots of America and the crooked banksters.  Last weeks' weird action shows that something big is going to happen soon.  When is the big question?