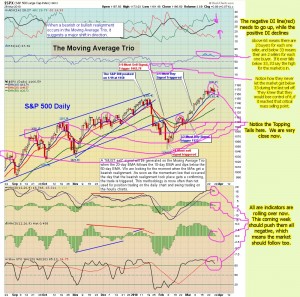 So yes... we should correct down next week, but will we?  Friday is a holiday next week and the market is closed.  That means only 4 trading days... and yet the government is still going to release the jobs report on Friday.  Why didn't they move it up to Thursday?  Does that mean that the number is horrible?  Probably so...

Regardless, unless the big institutions start the selling, any retail selling will be bought up on light volume.  That doesn't mean I don't think we won't sell off some next week.  I could easily see the 1150 spx support level being tagged sometime next week.

However, breaking that support level and heading on down to the support area around 1115 spx, is probably not going to happen next week... UNLESS, some big political news happens to scary the market!  That's really what we bears are hoping for, isn't it?  It's sad that they won't let the market trade up and down fairly, so both bulls and bears could profit.  If that happened, then we wouldn't look forward to some war to break out, country to go bankrupt, or terrorist attack to happen.

Instead, they manipulate the market to such extremes that the only way it will fall is on some horrible news like that.  I really don't want to profit from something so negative, that could have people dying, just for the market to sell off.  Why can't they let it happen naturally, from bad earnings, jobs reports, etc... so that the market could actually be valued fairly is beyond my understanding.

Yes, I know they want to steal everyone's money, and make all the profit they can.  However, it could still be done without creating chaos, and putting innocent people on the streets by bankrupting the company they work at, just to eliminate the competition like Goldman did to Lehman brothers.

The point I guess I'm getting too, is that I don't see a big sell off without some really bad news (possible war event,  another country bankruptcy announcement, terrorist attack, swine flu, Greece defaults, you name it?).  The first level down is of course the 1150 area, then 1115 area, and finally the 1075 area... where I caught a 107.38 spy fake print and Sundancer caught a 107.82 spy fake print.

Ultimately, I think we are headed there... probably within the next month.  But, the government is smarter (more evil and corrupt is more accurate of a word), then I am... which means they could manipulate this market sideways in a choppy fashion throughout the next 6 months or so, and finally crash it in the fall.

A move down to 1115 might be all we bears get from them, as the weekly chart is still pointing up.  It needs to rollover soon, if we are to state that 1180 is the high.  If we manage to take out the 104 (spy) level, then I think the weekly chart will roll over and the market is done! 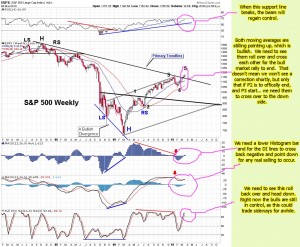 That stupid fake print tells me that we won't take it out, but instead rally back from that level and either put in a new high in the summer months or trade sideways in a range until this fall.  It's a really tough market to forecast, as it doesn't follow any patterns that can be tracked accurately.  Of course that's the way they want it... as we'd all be rich if it were easy to forecast.

So, let's not get our hopes up until volume comes back into the market.  That's unlikely to happen next week, as most traders will be waiting for the job's report on Friday.  Again, I do suspect that we will hit 1150 next week, as many traders will take some profit ahead of the report.  Plus, the end of the month and quarter window dressing is now over, and the big institutions can dump the shares they just bought, (so they could report to their clients that they owned them... as their clients will assume they have owned those companies for the entire 3 month quarter, but we know they only owned them for a few days).  That's window dressing my friends... clean up your house before the relatives come over for one day, and trash it the rest of the year!

Anyway, let's hope for something bad for the market too be announced... but not bad for people of course.  I don't want innocent people too be hurt or die for the bears to profit a little... but I wouldn't shed any tears for the thugs in Washington DC, or banksters! 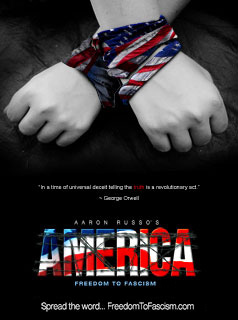