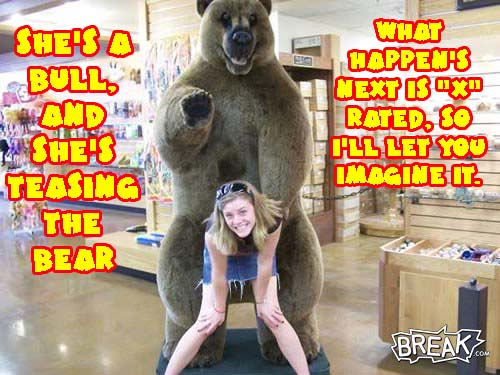 The Bulls have certainly been having their fun these last few weeks.  They tease the bear by acting like they are going to let him have a little fun.  This morning was no different as the bulls teased the bear by selling off on the Bad ADP job's numbers, only to rally back most of the loss throughout the rest of the day.

Tomorrow should be no different as the light volume should keep the market up.  But I suspect that by next week, the bear will rise again!  The bull won't know what hit him, as the bear is sneaky and will attack from behind.  Payback will be brutal and swift as bear seeks his revenge.

The government is already preparing us for bad job's numbers on Friday, by releasing the bad ADP numbers earlier today.  They are lowering the expectations by the market... which could lead everyone to believe that the numbers are really bad, or they could "pull another dead rabbit out of a hat" and beat the estimates largely?  I don't know which will happen, but a good number (from the part time new hiring of census workers) could also panic the market, as fears of rising interests rates from a growing economy come back into play.

So, my feeling is that the market will sell off next week regardless of what the numbers are.  That's probably why the government didn't push up the release to Thursday, or delay them until next Monday.  They know that's it's really a "NO Win Situation", and they are hoping that people will calm down over the 3 day weekend.

I think that it's a perfect time to also release some other bad political news, or global event to blame the coming sell off on.  Blame it on Greece or some other country... but not the bad or good jobs numbers.  Yes, I guess we could rally higher or trade sideways for another week... but I seriously doubt it.  We are now at 7 days in a row of sideways trading between about 1160 and 1180.

We did that back in the first week of January too... and you see what came next.  It was also about 7 days before a fall to the down side.  Looking back on the daily chart, I see that many times the market would trade sideways, in a tight range, for a week or more before falling hard.  Of course we could have the usual bullish Monday again, but I think we are overdue for a sell off on Monday.

I don't know if it happens or not, but it certainly would surprise a lot of bulls... and bears.  Ask yourself how many bears will go short over the 3 day weekend?  Not many I would guess?  They are so used too the bullish Monday's (plus time decay on options) that they will wait until next week before getting short.

It's hard to say for sure what they are thinking, but I'm sure it's aim is to steal the money from the new retail bulls, and not to allow the bears to profit from the sell off.  I'd say that they want to steal the bears' money too, but all the bears are now broke, as they stole that money many weeks ago.

Just basing my decision on the number of days sideways, compared to previous moves in the past, I'd say we are within a couple of days of a big move... which have the odds favoring the downside.  I'm probably going to get short tomorrow if the market rallies.  If it sells off, then I'll probably wait until Monday for the bounce back up.  However, I do expect the market to float higher on light volume tomorrow.  Not much of course, but higher none the less...