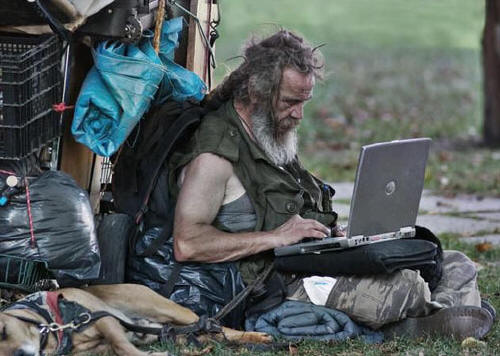 CNBC posts that we are going to have a "Jobless Recovery"!  HUH?  How the hell does that work?  Just curious, as I'm not the brightest tool in the wood shed.  If we don't have any new jobs, and people that aren't working don't have any money too spend... then who's buying?

The people that still have a job sure ain't!  The company I work for may not survive, as the work load has been cut down by 75% or more.  We have about 40 tech's covering 4-5 states, and work is down to 1-2 "half day's" of work per week.  It's the worst I've seen it.  Last year, during this same time period (which is normally slow), I worked 4-5 days a week.

Now, it's more like 1-2 days... and those day's are only half days.  Do you think I'm spending any money?  How about the other 39 tech's?  Other friend's of mine are also struggling as work loads drop, and all overtime is cut out.  If you still have a job, you should count yourself lucky.  Mine may disappear during this great jobless recovery...

If so, I'll be sure to take my laptop with me, to the homeless shelter.  I'll have to hide it, or they might think I'm rich or something?  I'll walk to McDonald's and steal their free internet, so I can continue doing these worthless daily posts... or bitch sessions.

If I'm ever going to be right calling the market, I'd better get used too saying... "the market is going UP again today", as the word "Down" is now a forbidden word (just like the media won't say Hussein... Obama's middle name?  WTF?).  Who really cares anyway what his name is?  I just call him "the Puppet", just like the President before him, and the one before him, and on and on...

The country is ruled by the elite few, and the President, Secretary of State, and the Federal Reserve Chairman are all just their puppets that they put out there in the public eye, so they can hide safely behind the scenes.  So if I sound bitter... well I am!

I'm sick of wasting my time looking at charts that tell me this market should rollover, but yet it continues up as the Great Jobless Recovery creates all these great earnings.  It's all horse shit!  (Sorry for language)  I talk to people every day when I'm working out in the public, and everyone tells me the same thing... the economy is getting worst, not better.

At least the economy was still booming during the 1999 tech bubble (thanks to Ronald Reagan, not Bill Clinton).  People had jobs then, and they were spending money.  Who's spending money now?  I guess I'm just plain stupid, as I don't get it... nor do I see it!