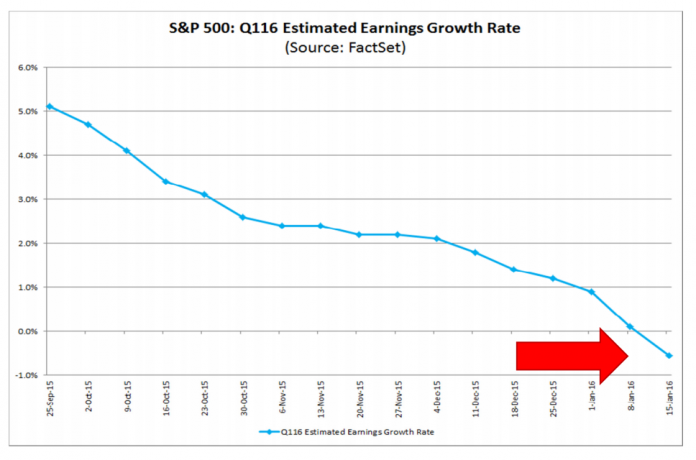 The prospect of four straight quarters of earnings declines is staring investors in the face on top of the worst multiweek selloff for stocks in years, and the worst start of the year ever.

Those hefty losses come as earnings season ramps up during the holiday-shortened week. Several companies on the S&P 500, along with seven Dow components, report quarterly results. And earnings season isn’t looking promising.

Total earnings for the S&P 500 in the fourth quarter are expected to decline from the previous year, even factoring that Wall Street forecasts’ have been lowered.

Over the past four years, estimates for S&P 500 earnings at the end of a given quarter have been an average three percentage points lower than the actual earnings results, according to John Butters, senior earnings analyst at FactSet.

Earnings were estimated to decline by 4.9% at the end of the fourth quarter, that would translate to a 1.9% decline if the average holds up. Currently, earnings are on pace for 5.7% drop.

Plus, current-quarter earnings estimates have taken a notable downturn in the past week.

First-quarter earnings for the S&P 500 are expected to decline from the year-ago period by 0.6%, compared with estimated growth of 0.9% at the beginning of the quarter, according to FactSet data.