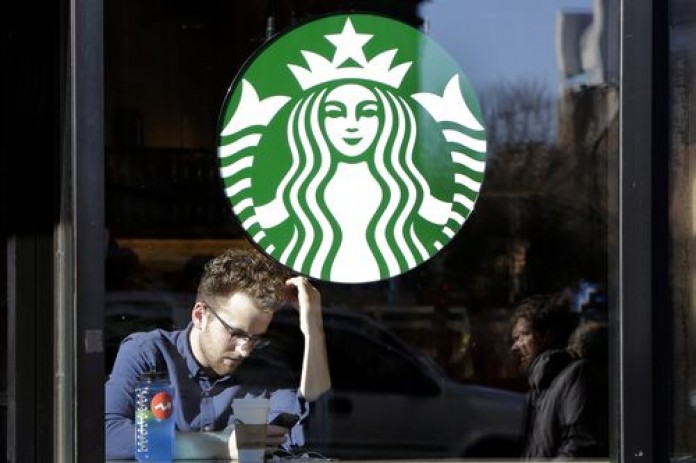 Starbucks is set to open 500 stores in China this year. The country could eventually surpass the U.S. as the coffee company's biggest market(Photo: AP)

The coffee chain empire said revenue rose nearly 12% to $5.37 billion in its fiscal first quarter, generating a profit of $687 million, down 30% from a year ago, the company announced after markets closed Thursday.

Starbucks (SBUX) earnings per share of 46 cents per share topped brokerage estimates 44 to 45 cents a share as compiled by S&P Capital IQ Consensus Estimates. Sales were largely in line with forecasts of $5.39 billion.

For its current quarter, Starbucks told investors it expects to make 38-39 cents a share in adjusted earnings. That's a little short of what Wall Street expected.

The results, announced after markets closed, sent Starbucks shares down 3.5% in after-hours trading.

The Seattle-based company’s growth was driven in part by a 4% increase in global customer traffic.

The company reported that 1 in 6 American adults received a Starbucks Card for the holidays, up from 1 in 7 in the first quarter of fiscal year 2015.

A record $1.9 billion was loaded onto Starbucks cards in the United States and Canada over the holiday season, Starbucks reported.

Starbucks has continued to build out its mobile order and payment app in the United States, where it was launched in 2014 and went nationwide in 2015. The app allows customers to order and pay for drinks ahead of time without having to wait in line.

“Asia had a great quarter, it delivered 5% comp store sales. That's a combination of our finishing our acquisition of Starbucks Japan combined with 281 net new stores in China and the Asia Pacific. Revenues there were up 32%” year over year, he said.

How does starbucks stay in business in my question?  Who in their right mind is still dumb enough to pay $10.00 for a cup of coffee?