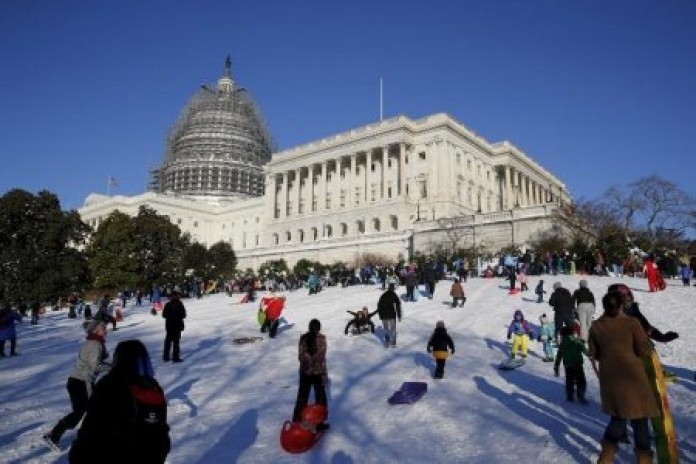 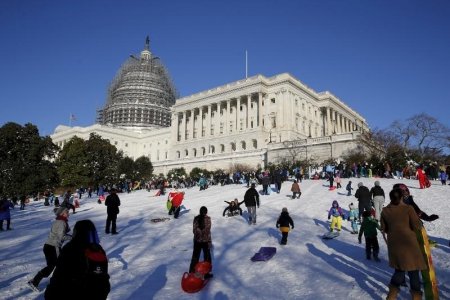 Thomson ReutersPeople sled and play in the snow on the hill below the U.S. Capitol in WashingtonBy Lucia Mutikani

WASHINGTON (Reuters) - U.S. economic growth likely braked sharply in the fourth quarter as businesses doubled down on efforts to reduce an inventory glut and unseasonably mild weather cut into consumer spending on utilities and apparel.

Gross domestic product probably rose at a 0.8 percent annual rate, according to a Reuters survey of economists, also as a strong dollar and tepid global demand hurt exports, and lower oil prices continued to undercut investment by energy firms.

The economy grew at a 2 percent pace in the third quarter. Risks to the fourth-quarter GDP forecast are tilted to the downside after a report on Thursday showed a collapse in new orders for long-lasting manufactured goods in December.

But some of the impediments to growth - inventories and mild temperatures - are temporary and the economy is expected to snap back in the first quarter. Nevertheless, the U.S. Commerce Department's advance fourth-quarter GDP report, to be released on Friday at 08:30 a.m. could spark a fresh wave of selling on the stock market, which has been roiled by fears of anemic growth in both the United States and China.

"Given the state of financial markets, fourth-quarter GDP could fuel fears that the expansion is unraveling. This would be misguided as inventories will be a significant weight and trade will also be drag," said Ryan Sweet, senior economist at Moody's Analytics in Westchester, Pennsylvania.

Though the Fed has not ruled another hike in March, financial markets volatility could see that delayed until June.

"We remain unconvinced that (the slowdown) will develop into a more serious economic downturn," said Paul Ashworth, chief U.S. economist at Capital Economics in Toronto.

"We have already seen a number of temporary dips in GDP growth during this expansion. Nevertheless, each time GDP growth accelerated again in the following quarter and there is no reason to believe this time will be any different."

In the fourth quarter, businesses are forecast to have accumulated between $55 billion and $65.9 billion worth of inventory, down from $85.5 billion in the third quarter. Economists estimate the small inventory build will slice off at least one percentage point from the first estimate of fourth-quarter GDP growth.

Consumer spending, which accounts for more than two-thirds of U.S. economic activity, is forecast to have increased at around a 1.7 percent rate. That would be a big step-down from the 3.0 percent pace notched in the third quarter.

Unusually mild weather hurt sales of winter apparel in December and undermined demand for heating through the quarter.

With gasoline prices around $2 per gallon, a tightening labor market gradually lifting wages and house prices boosting household wealth, economists believe the slowdown in consumer spending will be short-lived.

"The U.S. consumer is still in a good position to accelerate spending in the quarters ahead," said Scott Anderson, chief economist at Bank of the West in San Francisco.

The dollar, which has gained 11 percent against the currencies of the United States' trading partners since last January, likely remained a drag on exports, leading to a trade deficit that probably subtracted about half a percentage point from GDP growth in the fourth quarter.

The downturn in energy sector investment probably put more pressure on business spending on nonresidential structures. Oil prices have dropped more than 60 percent since mid-2014, forcing oil field companies such as Schlumberger and Halliburton to slash their capital spending budgets.

With consumer spending softening, inflation likely retreated in the fourth quarter. A price index in the GDP report that strips out food and energy costs is expected to have increased at a 0.7 percent rate, slowing from a 1.3 percent pace in the third quarter.