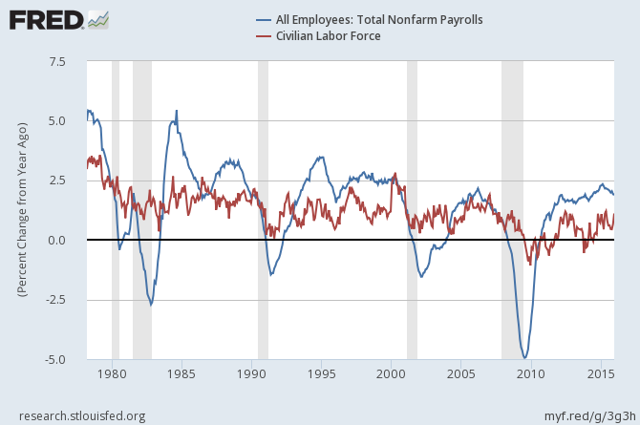 We witnessed very poor advance estimate of GDP growth this week for 4Q2015.

Does this mean that a recession did not start in 4Q2015?

I must confess that a recession is on my mind. It is the decline in the markets coupled with the recession currently occurring in the goods producing sector. It is entirely possible that a recession would be marked in 4Q2015.

As we know 4Q2015 advance estimate of GDP was released on Friday showing growth at 0.7%. Let us look at 4Q2007 advance GDP estimate:

Real gross domestic product - the output of goods and services produced by labor and property located in the United States - increased at an annual rate of 0.6 percent in the fourth quarter of 2007, according to advance estimates released by the Bureau of Economic Analysis.

Anyone getting deja vu? Advance estimates of GDP historically seem to be nothing more than a wild guess.

I have no love on the way the economy is measured. In business, your organization is no stronger than your weakest link. The links in the economy are people. The measurements therefore should be on the median to lowest people in the economy. The 0.1% do not need monitoring. The tools to measure would be employment and income. Employment is still recovering and is providing more and more of the population jobs - slowly but surely. Even though I have attacked the way employment is monitored, there is no argument that employment is improving (improving but at a slower pace than the rate the headlines show).

Employment growth, however, is driven by dynamics which occur months earlier - and therefore does not drive the future economy. It's an old canard that employment is a lagging indicator. So the Federal Reserve's concentration on employment as a guide when to raise the federal funds rate is misguided. As predicted, the economy was declining as the Fed adjusted the rates in December 2015. In the recent meeting statement, the Federal Open Market Committee (FOMC) did NOT continue their adjustment of the federal funds rate because "....economic growth slowed late last year." Gee, what a surprise to most except for the Federal Reserve. (Sarcasm.)