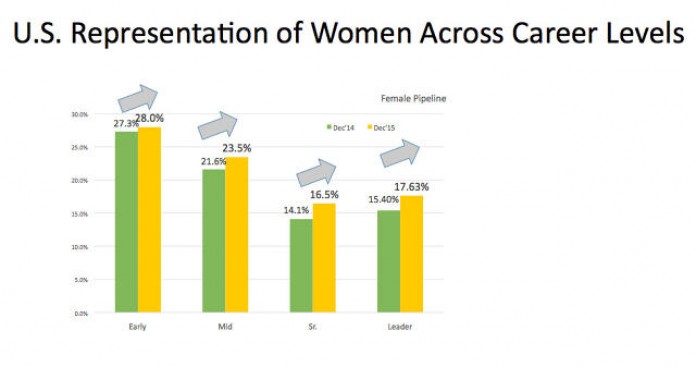 It’s been a year since Intel’s CEO Brian Krzanich announced a $300 million, five-year plan to bring the company’s workforce to "full representation" by 2020. A few months ago, we reported that the company surpassed its hiring goals for 2015.

In its ongoing effort to be radically transparent about the progress it's making toward diversity and inclusion in a number of areas (not just hiring), Intel issued another report on its first full year of results. Not surprisingly, the company is pleased with the strides it's already made for an investment of $52.4 million across the board in 2015.

The company has continued to hold every one of its more than 107,000 employees accountable to its diversity goals through a company-wide bonus program.

Overall, Danielle Brown, Intel’s chief diversity and inclusion officer, noted that the company has continued to hold every one of its more than 107,000 employees accountable to its diversity goals through a company-wide bonus program, a strong factor in determining how it exceeded its hiring goals last year. According to the report, the program yielded more than twice the number of referrals as in the previous year. Intel’s efforts to recruit a more diverse staff also pushed into more schools with greater diversity (a move we’ve reported can impact the number of black engineers at a company) and conferences.

Intel has also met its goal to retain overall diverse employees at the same rate as the rest of the population, and is bumping both its hiring and retention goals for 2016.

The company also boosted representation of women by 5.4% in 2015, which now makes its total female employee population stand at nearly one quarter (24.8%). Separating out the tech workforce, women represent 20.1% (including senior principal engineers), which is up 5.8% over the previous year. Intel’s senior leadership now stands at 17.6%. Still low, but for all these women there is pay parity with their male counterparts. Brown notes that a compensation analysis brought Intel to 100% pay parity in 2015.

To get there, Intel conducted a further compensation analysis examining gender pay parity for U.S. employees across job types and levels, to ensure no one was getting paid less than their job responsibilities dictated. This compares to the 23% pay gap in the overall technology industry, and the approximately 20% pay gap across the U.S., according to the Bureau of Labor Statistics. "In 2016, we’re intensifying our existing efforts with enhanced audits, to comply with recent changes in the laws of California and other states regarding pay equity," according to the report.

"Of course, we still have work to do," Brown admitted in a teleconference.

What They Still Have To Do

Most notably, the company has only made slight improvements to increasing the number of underrepresented minorities on staff (a total of 0.1%, to end the year at 12.4%), but fell short of retaining underrepresented minorities. For example, African-American workers had a higher exit rate than the rest of the staff. Although 209 were hired, 201 (not necessarily the same individuals) left the company. Eleven Native American employees were hired, and 19 left last year. For comparison, last year Intel hired 2,805 new staffers, and 3,364 left the company.

All this work to hire doesn’t mean a thing if Intel, or any company, can’t convince its newest employees that they are going to feel like they landed in an inclusive workplace.

Why are people leaving Intel? Brown tells Fast Company that after all the analysis on retention, "The reasons an employee chooses to stay or leave is intensely personal." Therefore, she says, Intel can’t expect that there will be one overall solution to get people to stay. "Community building is important," she says, like building a network of senior level women who can make connections. "It is complex," she confesses.

The heavy focus on internal events ended up pulling our diverse employees out of their day jobs too frequently, which didn’t set them up for optimal success.

Brown says that last year, Intel’s retention strategy was heavily focused on forming and building greater community among its diverse populations, and held many internal events focused on that goal. "That community building was useful, because it helped strengthen networks and create a sense of belonging and affinity," she says. But it wasn’t all positive.

"The heavy focus on internal events ended up pulling our diverse employees out of their day jobs too frequently, which didn’t set them up for optimal success for progression and growth in their organizations," Brown observes. Likewise, focusing on events for individual communities did the opposite of fostering inclusion, she says, "because we didn’t extend the events to include different, diverse perspectives beyond the group the event focused on."

The Importance Of Inclusion

With over 107,000 employees in offices across the globe, subcultures are bound to sprout up. "Working as a technician in our labs is very different than working as a marketing professional in headquarters," Brown says. "We understand we must tailor our approaches in retention and progression and understand the underlying, individual reasons employees stay or leave a company, and what challenges they individually face in retention and progression," she says.

On a company wide scale, Brown points out that while Intel has been conducting unconscious bias training for over a decade, that, too, wasn’t making much of a dent in retention and progression numbers. "We are still working on engineering bias out of our processes," she asserts, "but we needed to do more."

Debora Bubb, Intel’s vice president of HR and its director of global leadership and learning, chimes in to talk about GROW, the company’s portal to a site that contains videos, research summaries, and practice tools designed by neuroscientists and aimed at teaching employees how to progress in their careers as well as how to be more inclusive.

Employees who don’t stick around consistently cite reasons such as feelings of isolation, a negative environment, manager quality, or lack of ability to progress. Bubb says that GROW is a "direct response to those themes." She says GROW engaged 25,000 employees in its first month, which coincided with the year’s end and holidays.

"We’re already practicing new habits and integrating new language into our work and team interactions," Bubb says. One is to simply remember to insert the word "yet" at the end of a sentence. That effectively changes a statement such as, "I’m not good at this," to, "I’m not good at this yet."

The neuroscience-based curriculum is "a real breakthrough in the approach to retention and development," according to Brown.

Joelle Emerson, cofounder and CEO of the diversity and inclusion consultancy Paradigm, tells Fast Company that due to the size of Intel, it would be hard to not only teach 100% of employees about inclusivity, but also to encourage 100% of employees to change their behaviors.

"But what we know from social science research is that well-designed interventions can be remarkably impactful in changing people's mind-sets and behaviors," Emerson says. "For example, in the area of "growth mind-set," from which I believe Intel is hoping to draw, Stanford researchers found that brief interventions delivered online can improve learning and academic achievement across large bodies of students," notes Brown. "If Intel designs GROW effectively, I think there is a strong possibility that it will help a majority of employees practice more inclusive behavior."

Get The Best Stories In Leadership Every Day.