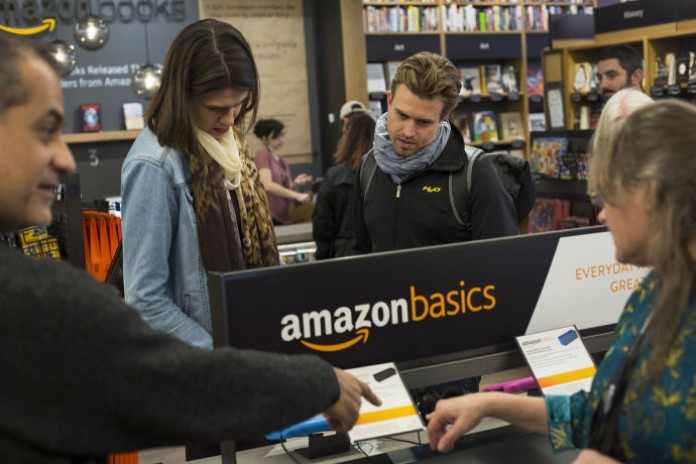 Customers in Amazon’s first brick-and-mortar bookstore, in Seattle. According to reports, the company plans to open many more in the near future.
Credit Photograph by David Ryder / Bloomberg / Getty

On Tuesday, Sandeep Mathrani, the chief executive of a national shopping-mall operator, said during an earnings call that Amazon.com was planning to open as many as four hundred physical bookstores in the next few years. At first, the news, which was reported in the Wall Street Journal but wasn’t confirmed by the company, sounded almost too strange to be true. Amazon opened its first retail bookstore, in Seattle, only this past November, and, although book sales form the historical core of its business, it now makes the vast majority of its money off of its highly profitable Web-services division. Moreover, Amazon’s identity is so tied to e-commerce that a purported plan to create its own version of the defunct Borders chain defied our expectations of ongoing digital progress.

The Times, citing an anonymous source, has since confirmed that the company plans to expand its physical presence, albeit at a much more modest scale than Mathrani suggested. But even four hundred stores might have been one of the most logical moves that Amazon has ever made, not to mention one that other online-first retailers, such as Warby Parker, Blue Nile, and Birchbox, have already cleared the way for. Amazon is unrivalled in its ability to sell and ship people books and other goods more cheaply and smoothly than anyone else, but, long after it established itself as the world’s de-facto bookseller, Amazon has failed (if purposefully, in many respects) to fulfill the simplest promise of the digital-commerce revolution: making a profit by selling goods online.

When Amazon began selling books in 1995, its business model seemed brilliantly simple. Without the costs and hassles of physical stores and their staff, and with limitless capacity for inventory, it was able to offer books at lower prices than other competitors could, including big chains such as Barnes & Noble, whose deep discounts had already threatened independent booksellers. Amazon could also grow more quickly than physical retailers, and, because of this, achieve unmatched economies of scale. The company’s success kicked off a revolution in online retailing, with countless startups and traditional retailers selling every possible product online. E-commerce transactions now make up close to ten per cent of all retail transactions in the United States, and that number continues to grow annually.

Launching an e-commerce business is relatively simple, especially when compared with opening a brick-and-mortar store. But it has proven to be difficult to make a profit from selling stuff online—a problem that is rarely acknowledged by the technology industry. E-commerce companies tend to point to sales, revenues, and other markers of growth, while eliding figures that speak to the most basic goal of retail: selling things for more than they cost. Most e-commerce startups fail to turn any profit at all, and those that eventually do succeed operate with extremely slim margins. This is why a company such as Gilt Groupe, which was once valued at more than a billion dollars, just sold to a traditional department-store chain for two hundred and fifty million dollars.

There are strong economic reasons that e-commerce struggles to make a profit. One is pricing. Deprived of most of the tools that physical stores can rely on (the presence of the object, nice locations, window displays, salespeople), online retailers rely heavily on offering the lowest possible price. And competition on price is intense, because a better offer is always just a click away (often, to Amazon’s vast digital catalog).

Then there’s shipping. Here, too, Amazon has established a difficult standard for the market, by offering discounted and free shipping on its products, and free returns as well. Most other e-commerce companies have been forced to follow Amazon’s lead. But as the retail consultant, onetime e-commerce entrepreneur (of the failed gift retailer Red Envelope), and New York University professor Scott Galloway pointed out in a widely discussed talk last year, all of this shipping costs tremendous amounts of money. That is, there is no such thing as “free” shipping. The U.P.S. driver doesn’t work for free, and the gas in the truck isn’t free, either. Amazon and other online retailers must absorb these costs, cutting into their potential profits and placing further stress on their pricing strategies.

To reduce these costs, many traditional retailers with e-commerce divisions, including Walmart, Macy’s, and Best Buy, have rolled out “click and collect” services, which allow customers to pick up online purchases in physical stores, saving both the customer and the retailer the cost of shipping that purchase. Amazon has already started to do this, with Amazon Locker, paving the way for a potential larger investment in a national brick-and-mortar retail chain. Amazon stores would serve as local warehouses, distribution centers, and someday, perhaps, drone-delivery airports.

The move from e-commerce to physical retail makes sense for deeply human reasons, too. Shopping has never been purely a transactional exchange of cash for goods. It’s also what we do on vacation, on weekends, and when we walk down a street. We shop to be with people, to have a place to go, to touch things, to indulge our consumption fantasies. Online shopping can offer a kind of digital mimesis of these things, but it doesn’t reward consumers in the same way as a physical store. Right now, Amazon might be the best place to find any book on Earth and purchase it at the lowest possible price, but the experience of shopping there remains impoverished. Even with all of the resources at its disposal, the company’s Web site is a morass of scattered graphics, random reviews, and predictable recommendations. (I just read a book about the history of Detroit—I don’t need ten more.)

The report of new Amazon stores comes at a time when independent bookstores are experiencing a surprisingly robust resurgence. According to the American Booksellers Association, the number of new bookstores in the U.S. has grown by more than twenty-five per cent in the past six years, while in-store sales have also grown. In New York, neighborhood stores such as Greenlight and Book Culture have added locations in the past few years to meet demand, selling books to their customers at prices that are often markedly higher than Amazon’s.

Aware of the advantages of physical space, some e-commerce companies are already opening stores or deepening their investments. Some are putting tremendous effort into making their shops as pleasurable as possible. Warby Parker’s showrooms have turned the act of purchasing eyeglasses into a sort of Wes Anderson–approved theme-park ride, complete with attendants in custom-designed blue smocks, photo booths, and jars of free pencils and school erasers. And while the stores look beautiful, and have been leased, designed, and staffed at a great cost, according to the company they’re also making money.

The great secret, too, for e-commerce companies with physical spaces, is that the stores can be arranged to offer the benefits of both the retail location and online shopping, drawing people in but driving online sales, too. This is what Amazon appears to have done with its test store in Seattle, integrating consumer product reviews on its shelf displays, stocking books that sell well online (including self-published titles), allowing for instant payment with Amazon technology, and offering unified online and in-store pricing.

These advantages, coupled with Amazon’s size, suggest a potentially fascinating development in the retail industry, and one that would make a good deal of sense for the company, especially given all the cash it has on hand. We would also see the company continue to tacitly admit that, for all the advantages of selling things online, you can’t be an everything store without actually having a shop or two.