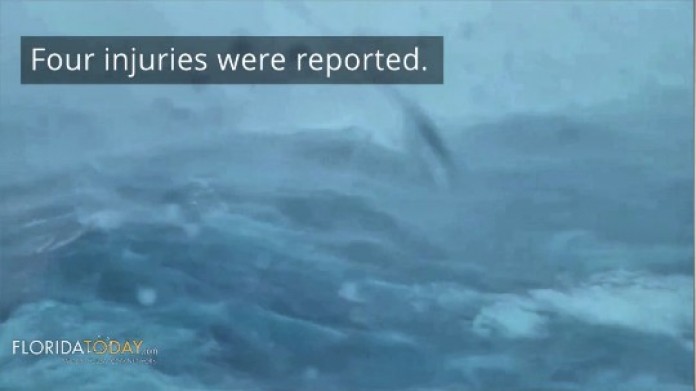 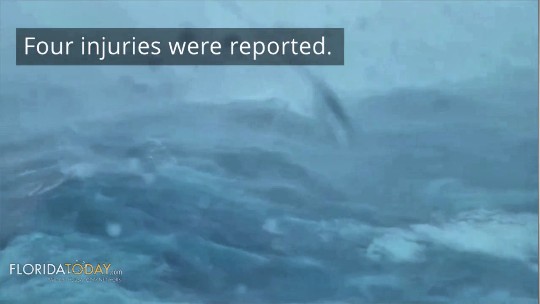 A Royal Caribbean cruise ship with nearly 5,000 passengers is headed to Port Canaveral today after hurricane-force winds and waves battered the vessel off the South Carolina Coast.

One of the world's newest and biggest cruise ships on Sunday was caught in a storm so powerful that the captain ordered passengers confined to their cabins for safety.

Royal Caribbean's 168,666-ton Anthem of the Seas experienced "extreme wind and sea conditions" that were not expected as it was sailing south from the New York area to Port Canaveral, Fla., according to a Royal Caribbean statement sent to USA TODAY.

Four passengers were injured during the event, though none seriously, according to spokeswoman Cynthia Martinez. The ship is returning to Bayonne, N.J., its home port, and the remainder of the voyage is being cancelled.

"I'm not going to lie: It was truly terrifying," said Robert Huschka, executive editor of the Detroit Free Press, part of the USA TODAY Network. Huschka is on board the ship with his family.

"A very nervous cruise director kept coming on. He didn't sound very reassuring. He said, 'We are okay,'" Huschka said.

Huschka said the captain of the vessel made an announcement at about 3:30 PM on Sunday as the storm raged that passengers should remain in their cabins, saying the strength of the storm had surprised everyone and that the ship would hold position and try to turn into it. The captain then was unavailable for announcements as the storm continued into the evening.

The situation began to improve late in the evening, and by 1:00 AM on Monday the ship had resumed sailing.

A buoy in the Atlantic about 260 miles south of Cape Hatteras reported wave heights of 30 feet and wind gusts of 74 mph late Sunday, according to the National Oceanic and Atmospheric Administration. A screen shot of the wind gauge on Anthem cabin TVs posted by a passenger on Twitter shows wind speeds as high as 106 knots, the equivalent of 122 miles per hour.

Still, Huschka said most of the damage to the ship appeared superficial, with "lots of broken glass, especially on the pool deck."  Water came in through some balcony doors and now is being mopped up or dried with blowers, he added.

One thing that was unaffected by the storm: The TV signal bringing in the Super Bowl on Sunday evening.  It was "perfect picture during the height of the storm," Huschka said. "That certainly improved my mood."

The center's first alert was issued on Friday at 1:00 p.m. for "developing hurricane-force winds" for Sunday, according to NOAA spokeswoman Susan Buchanan.Royal Caribbean said in its statement that the wind speeds that Anthem experienced on Sunday were "higher than what was forecasted" for the area. But federal forecasters from NOAA's Ocean Prediction Center had warned of a strong storm in the Atlantic for four days before Sunday.

The first official warning product was included in the offshore waters forecast at 3:34 p.m. on Saturday, Buchanan said. It included a warning for hurricane-force winds increasing to 63-75 mph, in effect through Sunday night.

In a second statement on Monday, Royal Caribbean said the decision to return to the New York area was made due to forecasts of poor weather over the next few days that is likely to impact the ship’s original itinerary.

"We are also sensitive to the fact that our guests have already been through an uncomfortable ride," the statement said. "Returning to Cape Liberty minimizes the risks of further bad weather affecting our guests’ voyage; we are optimistic that they will have a smooth sail home."

Royal Caribbean said passengers will receive full refunds of the fare they paid for the cruise and a credit for a future cruise equal to 50% of the fare.

"We know it was tough day on Sunday and apologize for (passenger) discomfort," the line said. "Safety is our highest priority and ships are designed to withstand even more extreme circumstances than Anthem of the Seas encountered. While the weather was unpleasant, the ship remained seaworthy at all times."

Anthem is carrying 4,529 passengers and 1,616 crew, according to a spokeswoman. It's on a seven-night voyage from its home base in the New York area to Florida and the Bahamas that began on Saturday.

Christened in April 2015, Anthem is tied with sister vessel Quantum of the Seas as the third largest cruise ship ever built.

USA TODAY Cruise was among a handful of U.S. media outlets to get early access to Anthem before its christening in Southampton, England. For our deck-by-deck tour of the vessel's interior areas and cabins, scroll through the carousels below. 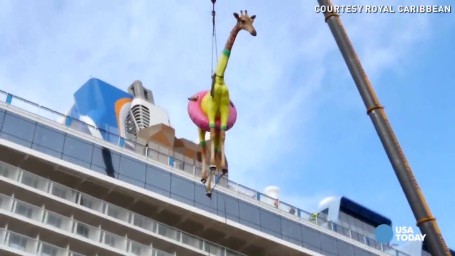 Gigi the giraffe is stealing the show on Royal Caribbean’s newest Quantum class ship, Anthem of the Seas. The 32-foot tall mascot made quite a journey to get on board the ship!
VPC

Royal Caribbean's Quantum of the Sea set sail from Southampton, Great Britain for its inaugural cruise on Friday, October 31, 2014.