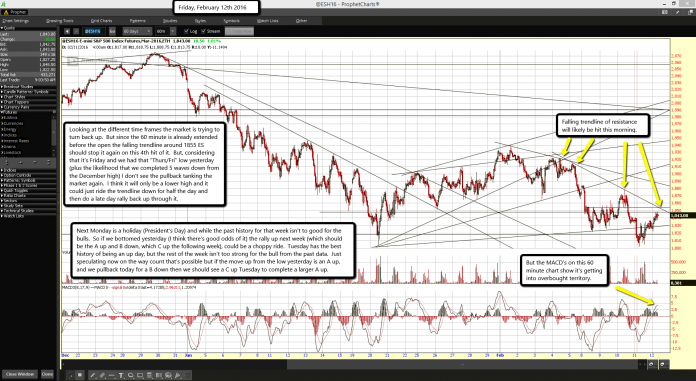 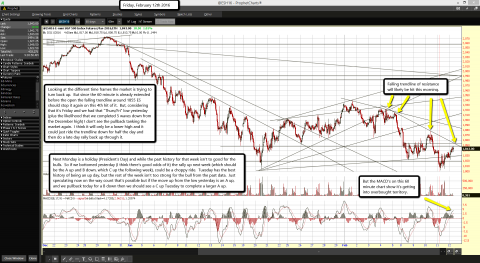 Falling trendline of resistance will likely be hit this morning.

But the MACD's on this 60 minute chart show it's getting into overbought territory.

Looking at the different time frames the market is trying to turn back up.  But since the 60 minute is already extended before the open the falling trendline around 1855 ES should stop it again on this 4th hit of it.  But, considering that it's Friday and we had that "Thurs/Fri" low yesterday (plus the likelihood that we completed 5 waves down from the December high) I don't see the pullback tanking the market again.  I think it will only be a lower high and it could just ride the trendline down for half the day and then do a late day rally back up through it.

Next Monday is a holiday (President's Day) and while the past history for that week isn't to good for the bulls.  So if we bottomed yesterday (I think there's good odds of it) the rally up next week (which should be the A up and B down, which C up the following week), could be a choppy ride.  Tuesday has the best history of being an up day, but the rest of the week isn't too strong for the bull from the past data.  Just speculating now on the way count that's possible but if the move up from the low yesterday is an A up, and we pullback today for a B down then we should see a C up Tuesday to complete a larger A up.