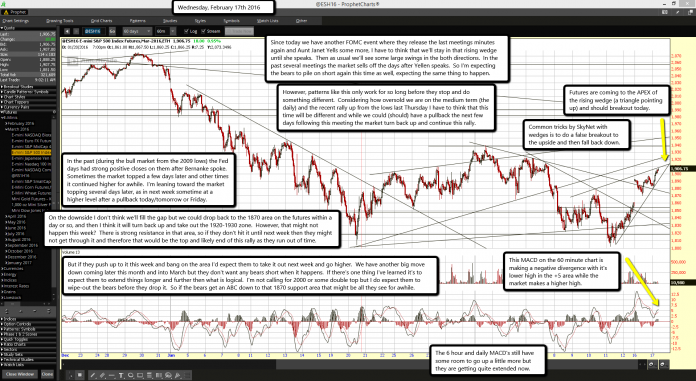 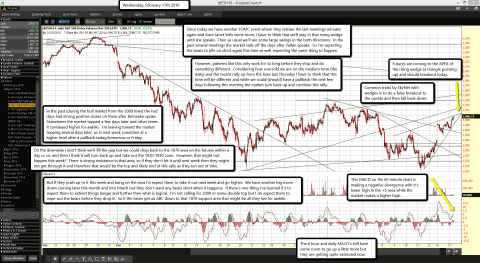 Futures are coming to the APEX of the rising wedge (a triangle pointing up) and should breakout today.

Common tricks by SkyNet with wedges is to do a false breakout to the upside and then fall back down.

This MACD on the 60 minute chart is making a negative divergence with it's lower high in the +5 area while the market makes a higher high.

The 6 hour and daily MACD's still have some room to go up a little more but they are getting quite extended now.

Since today we have another FOMC event where they release the last meetings minutes again and Aunt Janet Yells some more, I have to think that we'll stay in that rising wedge until she speaks.  Then as usual we'll see some large swings in the both directions.  In the past several meetings the market sells off the days after Yellen speaks.  So I'm expecting the bears to pile on short again this time as well, expecting the same thing to happen.

However, patterns like this only work for so long before they stop and do something different.  Considering how oversold we are on the medium term (the daily) and the recent rally up from the lows last Thursday I have to think that this time will be different and while we could (should) have a pullback the next few days following this meeting the market turn back up and continue this rally.

In the past (during the bull market from the 2009 lows) the Fed days had strong positive closes on them after Bernanke spoke.  Sometimes the market topped a few days later and other times it continued higher for awhile.  I'm leaning toward the market topping several days later, as in next week sometime at a higher level after a pullback today/tomorrow or Friday.

On the downside I don't think we'll fill the gap but we could drop back to the 1870 area on the futures within a day or so, and then I think it will turn back up and take out the 1920-1930 zone.  However, that might not happen this week?  There is strong resistance in that area, so if they don't hit it until next week then they might not get through it and therefore that would be the top and likely end of this rally as they run out of time.

But if they push up to it this week and bang on the area I'd expect them to take it out next week and go higher.  We have another big move down coming later this month and into March but they don't want any bears short when it happens.  If there's one thing I've learned it's to expect them to extend things longer and further then what is logical.  I'm not calling for 2000 or some double top but I do expect them to wipe-out the bears before they drop it.  So if the bears get an ABC down to that 1870 support area that might be all they see for awhile.