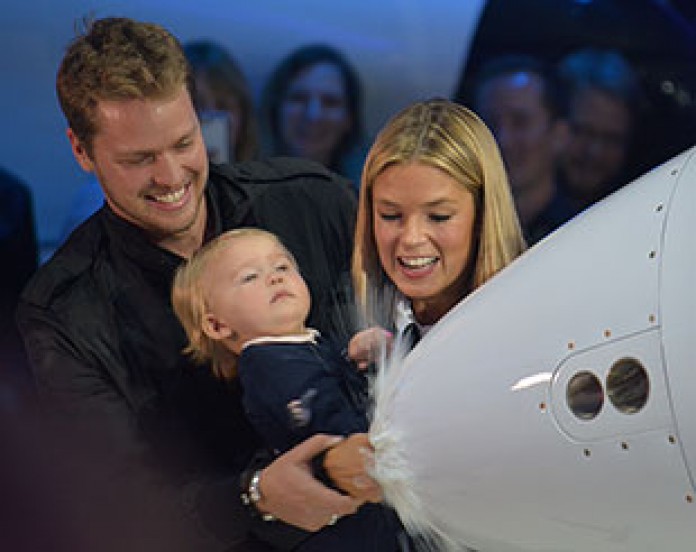 With those words delivered by physicist Stephen Hawking, and the break of a baby's milk bottle across its bow, Virgin Galactic on Friday (Feb. 19) christened the VSS Unity, the second of its SpaceShipTwo sub-orbital spacecraft, during a ceremony at the Mojave Air and Space Port in California.

The first vehicle to be entirely built and assembled by The Spaceship Company, Virgin Galactic's manufacturing arm, the VSS Unity emerged from behind a black curtain inside FAITH, the company's final assembly, integration and test hangar. The space plane, featuring a new silver and white livery, was towed into position by a Range Rover provided by Virgin Galactic's automotive partner, Land Rover.

"Now I'm pretty sure a one-year old has never christened a spaceship before, so we really are in 'virgin' territory," said Richard Branson, Virgin Galactic's founder, referring to his granddaughter, Eva-Deia. "But today seems to be the right time to change that, as we are after all celebrating the birth of two gorgeous babies." 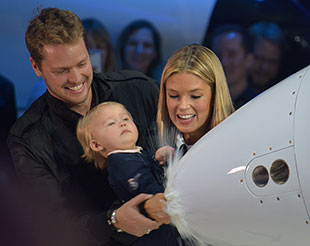 "Clearly, champagne would be inappropriate, [although] it never did me any harm, and certainly hasn't done my wife any harm, so do we have any milk?" asked Branson, who soon after watched on as Eva-Deia, helped by her mother and father, smashed the milk bottle across the nose of the newly-named spaceship.

"I've always believed that having the best looking planes and trains in the world, while not a guarantee of success, is a good start," said Branson. "But our new spaceship has taken that concept to a new level. Isn't she quite beautiful? She is quite stunning."

A better and safer system

Under construction for four years, the VSS Unity succeeds and replaces Virgin Galactic's original SpaceShipTwo, the "VSS Enterprise," which was rolled out in December 2009 and was destroyed during a fatal accident in 2014.

"It has now been 16 months since our flight test accident. That was a hard day," said George Whitesides, the CEO of Virgin Galactic. "It was a moment when years of hard work were put into public doubt and the life of a brave test pilot, a family man and a friend to many of us was lost."