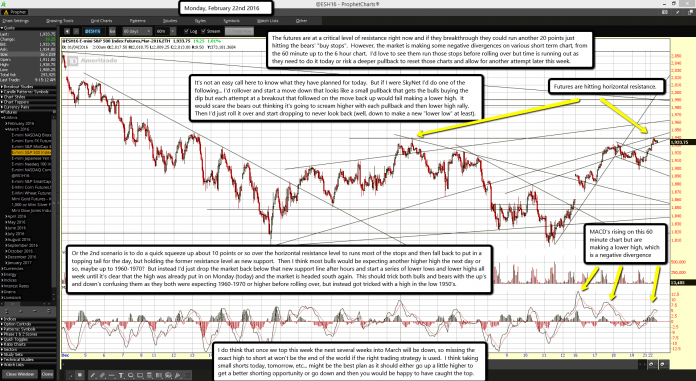 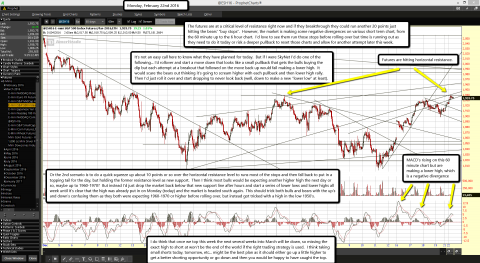 MACD's rising on this 60 minute chart but are making a lower high, which is a negative divergence.

The futures are at a critical level of resistance right now and if they breakthrough they could run another 20 points just hitting the bears' "buy stops".  However, the market is making some negative divergences on various short term chart, from the 60 minute up to the 6 hour chart.  I'd love to see them run those stops before rolling over but time is running out as they need to do it today or risk a deeper pullback to reset those charts and allow for another attempt later this week.

It's not an easy call here to know what they have planned for today.  But if I were SkyNet I'd do one of the following... I'd rollover and start a move down that looks like a small pullback that gets the bulls buying the dip but each attempt at a breakout that followed on the move back up would fail making a lower high.  It would scare the bears out thinking it's going to scream higher with each pullback and then lower high rally.  Then I'd just roll it over and start dropping to never look back (well, down to make a new "lower low" at least).

Or the 2nd scenario is to do a quick squeeze up about 10 points or so over the horizontal resistance level to runs most of the stops and then fall back to put in a topping tail for the day, but holding the former resistance level as new support.  Then I think most bulls would be expecting another higher high the next day or so, maybe up to 1960-1970?  But instead I'd just drop the market back below that new support line after hours and start a series of lower lows and lower highs all week until it's clear that the high was already put in on Monday (today) and the market is headed south again.  This should trick both bulls and bears with the up's and down's confusing them as they both were expecting 1960-1970 or higher before rolling over, but instead got tricked with a high in the low 1950's.

I do think that once we top this week the next several weeks into March will be down, so missing the exact high to short at won't be the end of the world if the right trading strategy is used.  I think taking small shorts today, tomorrow, etc... might be the best plan as it should either go up a little higher to get a better shorting opportunity or go down and then you would be happy to have caught the top.