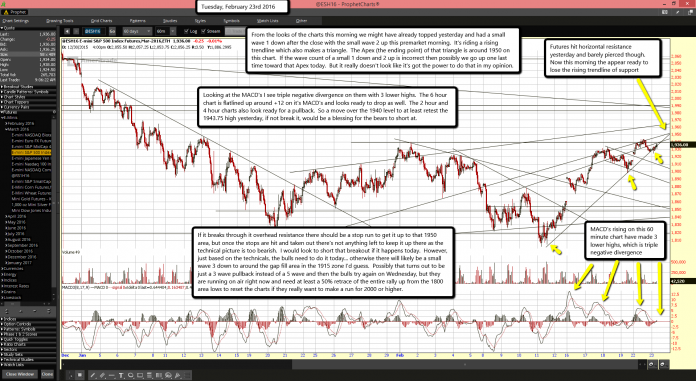 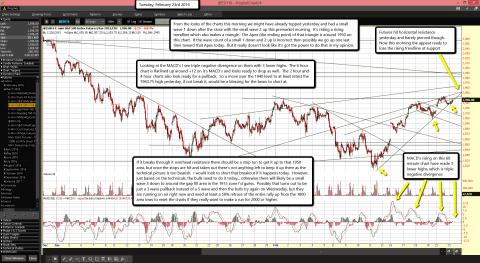 Futures hit horizontal resistance yesterday and barely pierced though.  Now this morning the appear ready to lose the rising trendline of support

MACD's rising on this 60 minute chart have made 3 lower highs, which is triple negative divergence

From the looks of the charts this morning we might have already topped yesterday and had a small wave 1 down after the close with the small wave 2 up this premarket morning.  It's riding a rising trendline which also makes a triangle.  The Apex (the ending point) of that triangle is around 1950 on this chart.  If the wave count of a small 1 down and 2 up is incorrect then possibly we go up one last time toward that Apex today.  But it really doesn't look like it's got the power to do that in my opinion.

Looking at the MACD's I see triple negative divergence on them with 3 lower highs.  The 6 hour chart is flatlined up around +12 on it's MACD's and looks ready to drop as well.  The 2 hour and 4 hour charts also look ready for a pullback.  So a move over the 1940 level to at least retest the 1943.75 high yesterday, if not break it, would be a blessing for the bears to short at.

If it breaks through it overhead resistance there should be a stop run to get it up to that 1950 area, but once the stops are hit and taken out there's not anything left to keep it up there as the technical picture is too bearish.  I would look to short that breakout if it happens today.  However, just based on the technicals, the bulls need to do it today... otherwise there will likely be a small wave 3 down to around the gap fill area in the 1915 zone I'd guess.  Possibly that turns out to be just a 3 wave pullback instead of a 5 wave and then the bulls try again on Wednesday, but they are running on air right now and need at least a 50% retrace of the entire rally up from the 1800 area lows to reset the charts if they really want to make a run for 2000 or higher.