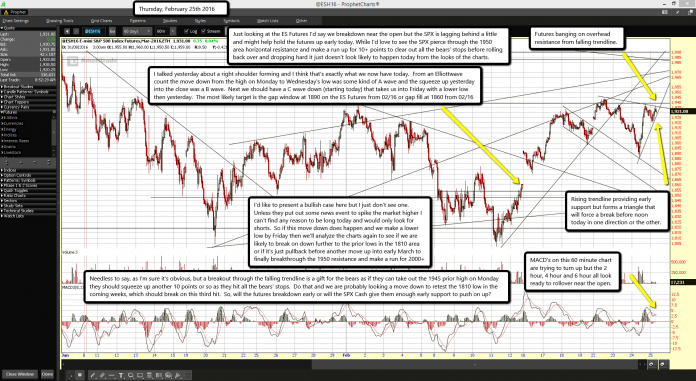 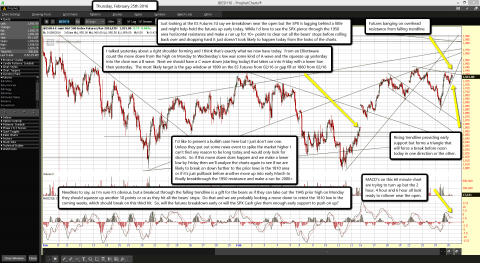 Rising trendline providing early support but forms a triangle that will force a break before noon today in one direction or the other.

MACD's on this 60 minute chart are trying to turn up but the 2 hour, 4 hour and 6 hour all look ready to rollover near the open.

Just looking at the ES Futures I'd say we breakdown near the open but the SPX is lagging behind a little and might help hold the futures up early today. While I'd love to see the SPX pierce through the 1950 area horizontal resistance and make a run up for 10+ points to clear out all the bears' stops before rolling back over and dropping hard it just doesn't look likely to happen today from the looks of the charts.

I talked yesterday about a right shoulder forming and I think that's exactly what we now have today.  From an Elliottwave count the move down from the high on Monday to Wednesday's low was some kind of A wave and the squeeze up yesterday into the close was a B wave.  Next we should have a C wave down (starting today) that takes us into Friday with a lower low then yesterday.  The most likely target is the gap window at 1890 on the ES Futures from 02/16 or gap fill at 1860 from 02/16

I'd like to present a bullish case here but I just don't see one.  Unless they put out some news event to spike the market higher I can't find any reason to be long today and would only look for shorts.  So if this move down does happen and we make a lower low by Friday then we'll analyze the charts again to see if we are likely to break on down further to the prior lows in the 1810 area or if it's just pullback before another move up into early March to finally breakthrough the 1950 resistance and make a run for 2000+

Needless to say, as I'm sure it's obvious, but a breakout through the falling trendline is a gift for the bears as if they can take out the 1945 prior high on Monday they should squeeze up another 10 points or so as they hit all the bears' stops.  Do that and we are probably looking a move down to retest the 1810 low in the coming weeks, which should break on this third hit.  So, will the futures breakdown early or will the SPX Cash give them enough early support to push on up?