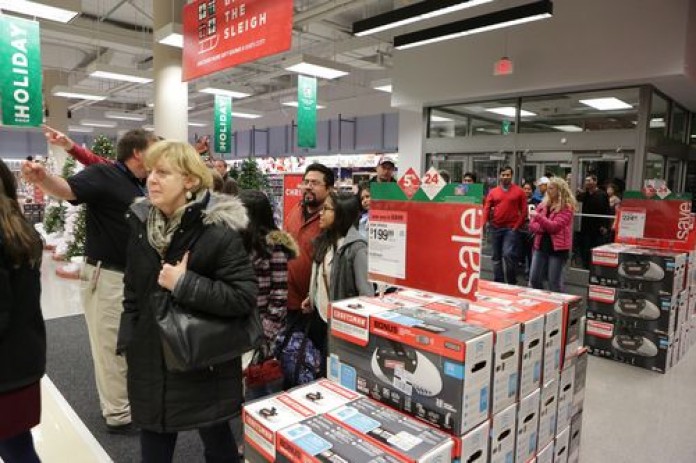 Shoppers stream into a Sears store in Schaumburg, Ill., on Thanksgiving, Nov. 26, 2015.

In a case of the old economy colliding with the new, Sears' CEO Thursday cited the advantages that upstarts like Uber, Tesla Motors and Amazon hold over old-line companies like his own in announcing a deeper fourth-quarter loss than a year ago.

CEO Edward Lampert invoked the newcomers' names to raise a shopping list of complaints about perceived disadvantages confronting what was once one of the nation's iconic retailers, from sales tax collection to a higher minimum wage, which he says makes it difficult to compete against successful online businesses.

Sears, which has both the Sears and Kmart chains, reported a loss of $580 million, or $5.44 per share, in the quarter ended Jan. 30, compared with a loss of $159 million, or $1.50 a share, in the year-ago quarter. The adjusted loss of $1.70 a share was better than analysts had forecast, a loss of $2.62 a share, according to S&P Global Market Intelligence. Revenue came in at $7.3 billion, down from $8.1 billion in the year-ago quarter, marginally better than expectations. Most of the revenue decline was due to same-store sales falling, though some of it was attributed to having fewer Sears and Kmart stores.

But aside from the numbers, what captured attention was Lampert's lengthy lament about the state of the traditional retail industry — and Sears' place on it.

He cited Tesla as being among the newer companies that "rely heavily on continued financing." By contrast, "companies viewed through a more traditional lens, like Sears Holdings, are met with skepticism even though we have an enormous asset base and a proven history of monetizing these assets and raising additional capital to fund our obligations and transformation."

Uber, the ride-sharing service, has raised billions even as it takes losses in key markets like China, Lampert wrote. Yet companies like his own "are held to a very different standard when it comes to profitability and regulation."

Online merchants often don't have to collect sales taxes, unlike Sears. And "large companies like Sears Holdings have also been met with additional burdens like higher minimum wage costs," he said. "With stores that are marginally profitable or unprofitable, such additional cost burdens can be the straw that breaks the camel’s back, causing stores to close and eliminate jobs," he added.

Despite Lampert's outcry, analysts haven't been as sympathetic to Sears' woes. "Much of this decline is still the result of things that Sears is getting wrong," says Neil Saunders, CEO of retail research firm Conlumino. The long slide in sales and profit shows that the company hasn't come "to grips with getting the business back on track. They're almost just managing the decline the best they can."

Sears has undergone a long slide as it has shrunk its store network.  While many retailers experienced a soft quarter, Sears' sales declines were worse than most and follow roughly a decade of poor performance. Five years ago, Sears' shares were trading above $60.

Sears warned earlier this month that it didn't expect to fare well in the quarter and said it would accelerate 50 planned store closures this year as well as look for other ways to cut costs. The company ended the year with 1,672 Sears and Kmart stores.

Some of Sears' problems in the critical fourth quarter — when holiday shopping hits its peak — was due to unseasonably warm weather that dampened enthusiasm for cold-weather apparel and other merchandise. Lampert also said that the heightened competition during the busy holiday season led to "higher than expected markdowns."

Sales at Sears and Kmart stores open at least a year fell 6.9% and 7.2% respectively. Still, those declines were the best sales performance of the year, the company said.

Lampert reiterated that the company plans to accelerate the timeline of its transformation into a retailer better integrated with digital services and focused on a member loyalty program to drive sales. Sears plans to reduce costs by up to $650 million this year, after cutting approximately $150 million in expenses in the fourth quarter.

Sears reported it had $238 million in cash as of Jan. 30, down from $250 million the previous year. Fitch Ratings says Sears had had significant cash burn, with a liquidity position that is about $1.4 billion less than expected. Sears is among 218 companies listed by Standard & Poor's Ratings Services earlier this month as being among the "weakest links," having the lowest credit ratings with a negative outlook.

The problem with Sears' financial maneuvers is they don't do anything to lure customers, which is ultimately the issue the company faces, Saunders says.

More on Sears' part than Kmart's, product assortment between fashion and appliances is confusing for customers, Saunders says, and management's focus on improving liquidity for the business as a whole is taking focus away from vital improvements that need to be made to update stores.

Another retailer, J.C. Penney, reports Friday, again opening a door into older chains are faring in a rapidly changing economy.