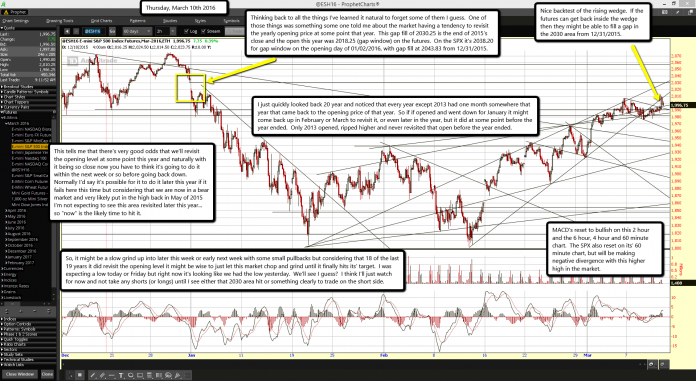 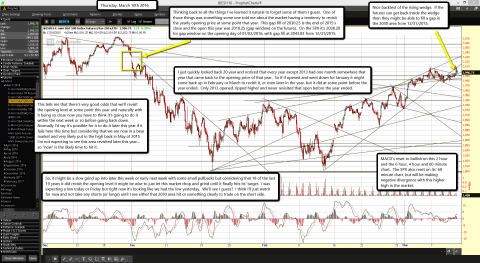 MACD's reset to bullish on this 2 hour and the 6 hour, 4 hour and 60 minute chart.  The SPX also reset on its' 60 minute chart, but will be making negative divergence with this higher high in the market.

I just quickly looked back 20 year and noticed that every year except 2013 had one month somewhere that year that came back to the opening price of that year.  So if if opened and went down for January it might come back up in February or March to revisit it, or even later in the year, but it did at some point before the year ended.  Only 2013 opened, ripped higher and never revisited that open before the year ended.

This tells me that there's very good odds that we'll revisit the opening level at some point this year and naturally with it being so close now you have to think it's going to do it within the next week or so before going back down.  Normally I'd say it's possible for it to do it later this year if it fails here this time but considering that we are now in a bear market and very likely put in the high back in May of 2015 I'm not expecting to see this area revisited later this year... so "now" is the likely time to hit it.

So, it might be a slow grind up into later this week or early next week with some small pullbacks but considering that 18 of the last 19 years it did revisit the opening level it might be wise to just let this market chop and grind until it finally hits its' target.  I was expecting a low today or Friday but right now it's looking like we had the low yesterday.  We'll see I guess?  I think I'll just watch for now and not take any shorts (or longs) until I see either that 2030 area hit or something clearly to trade on the short side.