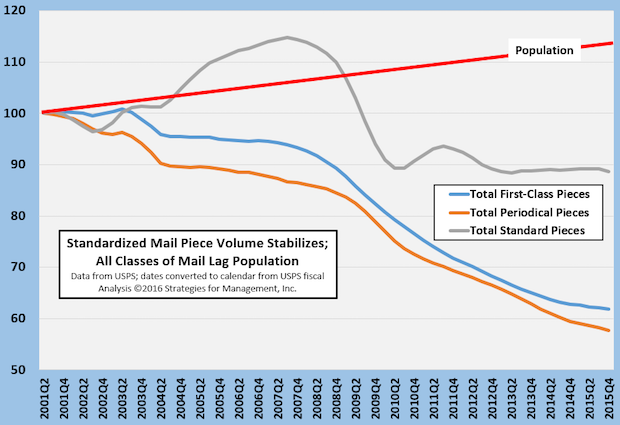 The USPS exigent price increase has expired, and USPS says they “will lose approximately $2 billion in annual revenue resulting from a price reduction” which they knew was going to expire. The increase was to help “recover for the massive volume and revenue losses resulting from the Great Recession.” Yet, Dr. Joe shows that the declines in USPS volume kept declining after the economic recovery began in mid-2009. Then Dr. Joe talks about recession in light of recent economic data. Yeah, they’ll be calling him Dr. Doom again.

The “forced” price reduction by the US Postal Service (read their release) is, as my late mother-in-law used to say with a slight Hungarian accent, “a lotta hooey.” This was the expiration of an increase forced onto postal customers and the public based on the terms of an exigent price increase program to save the USPS when they were in financial trouble. During its time, the USPS was to get their house in order before its planned expiration.

Now, the USPS is claiming it is being shortchanged when in reality its customers were being overcharged. Is this like the slayer of parents asking for the mercy of the court because he was recently orphaned? USPS problems are a long term combination of self-infliction, myopia and a large doses of oversight and regulatory meddling. It’s time to set the USPS free, and let it run as a real business making the hard decisions real businesses have to make.

Instead, they’re backed into a corner. By focusing automation efforts on big postal customers who supply the bulk of their volume, where the savings would be fastest and biggest, they rarely found time to nurture small postal user volume or make aggressive efforts to create new businesses. EDDM is not the answer for everyone.

This is the downside of Pareto analysis. In the 80-20 rule, you focus on the 20 that gives you the 80. But Pareto is a snapshot, and the 20 that gives you the 80 today might be totally different tomorrow. It solves short term problems. Call it the Motorola problem. The company that gave us Six Sigma quality got lost producing defect-free products that the market did not want. Look at the shiny object while a competitor steals your market share.

This inside-out thinking makes great accounting sense quarter-to-quarter as you can show cost-saving acumen, but you neglect the big world outside. There remains little comprehension that their pricing is out of line with competitors, and they are shackled by numerous political rent-seekers who influence their actions in destructive ways.

If this was a real business, especially a publicly traded company, no board of directors would have allowed the precipitous decline in sales to persist without dramatic actions and swift changes in management and strategy. Those management changes would be people from outside of their business, not internal promotions. The USPS is not known as a hotbed of entrepreneurial innovation by its very design. (Lysander Spooner, where are you now that we need you?)

Before anyone mentions the pension payments that were part of the USPS agreements in the past, those are real actuarial costs, and a contractual commitment that was known well in advance. All businesses deal with costs that they cannot control, especially of a regulatory and compliance nature, with much of them hidden in all of their costs. The USPS has many benefits that businesses cannot have, many of them in a report by Robert Shapiro and discussed at the Brookings Institution. As one can imagine, the USPS community hated the “study,” as detractors would use quotes around the word so as to disparage it.

What do they have to show for the exigent price increase? The press release about the recent Annual Compliance Determination said “The majority of products failed to meet service performance targets for FY 2015.” Kudos to the Postal Regulatory Commission for not taking the easy way out and renewing the exigent increase. Whether anything comes of it remains to be seen.

Now a calm look at the data. In last week’s newsletter, the chart of the week looked at Every Door Direct Mail (EDDM). Here are other data for major categories.

It is helpful to look at what has happened to postal volume in ways outside of revenues that cannot be distorted by inflation. In terms of pieces, standard mail has stabilized while others have declined. Had volume kept up with population, it would be 13% higher than in 2001.

In terms of weight, mail is getting lighter. This may be a surprise, but mailers react to price increases by redesigning the nature of their mailings. All postal price changes are reacted to by its customers. Postal costs are not their only costs, nor is the postal service their only choice to reach their target audience. 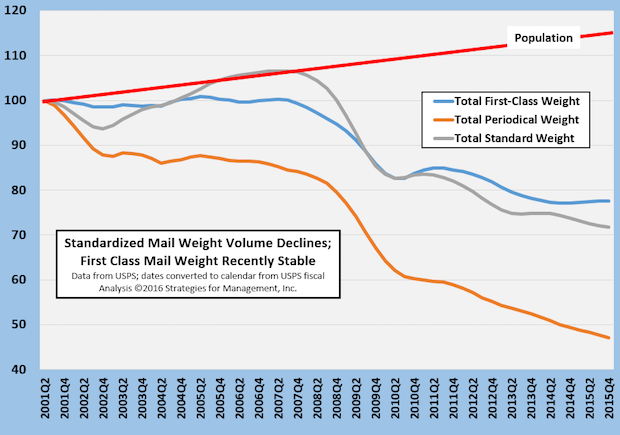 The USPS is hampered by law from expanding into other services and from reacting to the actions of competitors. This fosters strategic blindness to market needs as they focus on the services they have and can only get approvals for minor changes to them. USPS says they understand that there are alternatives but they do little to decisively act on their recognition.

The USPS press release said “The PRC granted an exigent surcharge beginning in January 2014… to recover for the massive volume and revenue losses resulting from the Great Recession.” Look at the charts: the volume and revenue losses occurred after the economic recovery began in mid-2009. Standard mail stabilized and even rose for a short time. First class and periodicals continued to decline because postal prices did not keep up with competitive alternatives; they were declining prior to the recession and just continued to do so. During the recovery, mobile media, smartphones, and other technologies kept taking dollars that would previously have supported postal volume. Some first class mail volume was switched to standard mail; in other words, USPS lost a portion of its first class volume to itself as customers attempted to manage their costs.

It’s time to set the USPS free. It needs to become a publicly owned company where half of the stock is held by the union members and their pension funds. It needs a board of directors comprised of owners, not stakeholders, not rent-seekers, and not placeholders. Those whose very livelihoods depend on the growth success of the organization need to be there, not those stretching out its survival.

Until that happens (which is never), here is my advice to printers. Navigating the nature of the USPS and its regulations has always been a special skill rewarded by the marketplace. No matter what the situation, USPS costs will be going up, if not in a nominal sense, but because the cost disparity with other media will continue to widen. That means that data management, customer and prospect analytics for mailers, and automation have to make up for the cost disparities that the USPS is unable to address. There is great interest in new ink jet presses, such as those to be shown at drupa (especially Benny Landa’s efforts) that may deliver new production capabilities that can increase flexibility, reduce production steps (such as eliminate two-pass approaches like digital printing on offset shells), and give print a fighting chance as a mailed medium again. If you are only in the mailing business for part of your volume, seek alliances with mailing specialists who will be able to keep up with the technologies needed to be profitable in this kind of environment. All printers used to do mailings; it is becoming a highly specialized niche that you can’t be successful in with out full commitment. There are few products, like EDDM, that are directly targeted to small business that are appropriate in certain uses, that small print businesses can handle with little sophistication. But big mail will require big data and big automation to balance increasing costs of compliance and postage.

The Economy: Love Those Mixed Messages

GDPNow last +0.1% but it fell because of bad wholesale inventory numbers, which may not be as bad news as it sounds. GDP and net inventories had been out of balance, inflating GDP more than its underlying trend.

There is no doubt a recession is possible and this GDP estimate did seem to attract a lot of attention of analysts claiming that this could indicate the start of a recession. If you really wanted to declare a recession, the last peak of manufacturing using the factory orders data was in mid-2014. 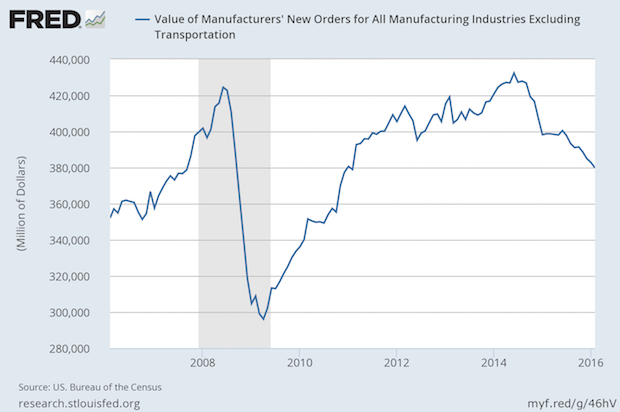 Recessions are always declared after they started and always at the last peak of economic activity. The last time a recession was declared we were eleven months into it. The last recession began in December 2007 and was not declared until November 2008. Many of the economic indicators during that period were good, and the true evidence of the recession did not occur until commodities prices collapsed. This time, commodities prices collapsed already and are starting to rebound.

The old rule of thumb of two consecutive quarters of negative growth was never the official definition of a recession. It’s the task of the National Bureau of Economic Research to declare them, and their guidelines are there for all to see. Here are the key comments; italics and underscores are mine:

“The committee's approach to determining the dates of turning points is retrospective. We wait until sufficient data are available to avoid the need for major revisions. In particular, in determining the date of a peak in activity, and thus the onset of recession, we wait until we are confident that, even in the event that activity begins to rise again immediately, it has declined enough to meet the criterion of depth. As a result, we tend to wait to identify a peak until many months after it actually occurs.”

This means that any businessperson will suspect that a recession is in place before the academics declare it. They have the luxury of sitting around and waiting for data. Business owners do not. Stay vigilant.
Source link