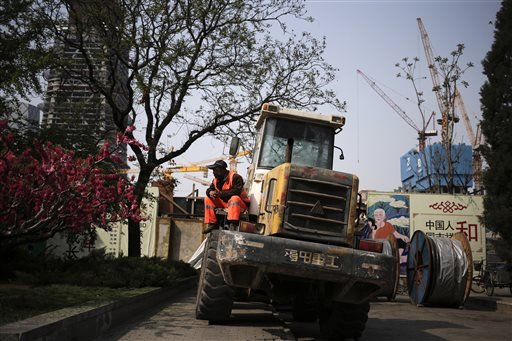 A worker takes his break on a bulldozer parked near a construction site at the Central Business District of Beijing, Monday, April 11, 2016. China will remain the main driver of growth in Asia this year despite its prolonged slowdown, helped by sustained expansions in other developing countries in the region, the World Bank said Monday. (AP Photo/Andy Wong)MANILA, Philippines (AP) — Growth in developing East Asia and the Pacific is expected to remain resilient despite the slowdown in China and a gloomy global outlook, the World Bank said Monday.

The U.S.-led development bank forecasts that developing East Asia will expand at a still robust pace of 6.3 percent this year and 6.2 percent in 2017-2018, down from 6.5 percent in 2015 and slightly lower than its forecast in October. The Philippines and Vietnam will lead growth in Southeast Asia.

Indonesia, the biggest economy in Southeast Asia, is forecast to grow by 5.1 percent in 2016, 5.3 percent in 2017, and 5.5 percent in 2018. But that will depend on the success of recent reforms and follow-through on ambitious public investment plans.

China, the world's second-biggest economy, is shifting from export and investment-led growth to a greater reliance on consumer spending. The World Bank's latest estimate puts growth at 6.7 percent this year, 6.5 percent in 2017, and 6.2 percent in 2018, down from 6.9 percent in 2015.

"The resilience of growth of the economies in this region is particularly striking when you realize that this has been achieved against the backdrop of fairly gloomy global growth," said Sudhir Shetty, the bank's chief economist for East Asia and the Pacific region.

But he cautioned that "it's a very volatile time for the global economy."

"The region has benefited from careful macroeconomic policies, including efforts to boost revenue in commodity-exporting countries," she said. "But sustaining growth amid challenging global conditions will require continued progress on structural reforms."

The report called for close monitoring of economic risks, particularly those associated with high levels of debt, price deflation, slower growth in China, and high corporate and household debt in some large economies.

China reported Monday that its inflation remained steady at 2.3 percent in March, while wholesale prices paid by manufacturers, the producer price index, dropped 4.3 percent. To counter that deflationary trend, authorities plan to eliminate much of the country's excess factory capacity, especially in the steel sector.

The World Bank report urged China to continue reforms of its restrictive household-registration system, and to shift public spending from infrastructure toward public services including education, health, social assistance and environmental protection.

Elsewhere in developing Asia, the World Bank said the Philippine economy was expected to expand 6.4 percent in 2016, up from 5.8 percent last year. Vietnam is seen growing 6.5 percent this year, down from 6.7 percent last year.

The Southeast Asian economies most likely to be adversely affected by China's tapering growth include Indonesia, Mongolia, Malaysia, Vietnam, Laos and Myanmar.

Cambodia's growth is forecast at slightly below 7 percent in 2016-2018 due to weaker prices for agricultural commodities, constrained garment exports, and moderating growth in tourism.

"Countries should adopt monetary and fiscal policies that reduce their exposure to global and regional risks, and continue with structural reforms to boost productivity and promote inclusive growth," said Shetty.
Source link