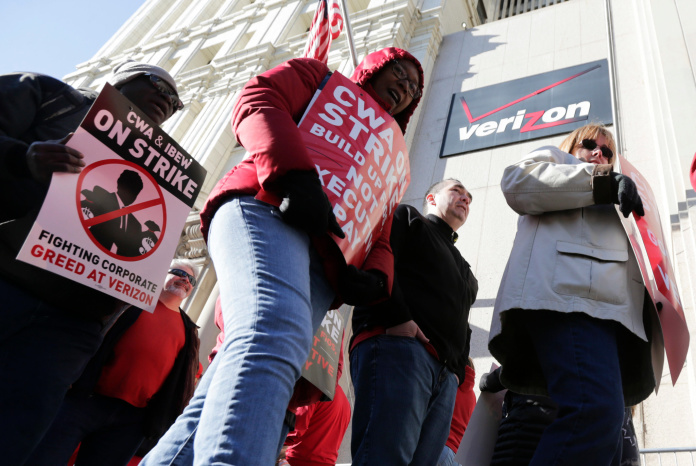 By contrast, the wireless business, which is largely not unionized and where wages and benefits for rank-and-file workers are lower on average, is booming and highly profitable. Over the last few years, Verizon’s wireless business has consistently grown at least 7 percent a year, whereas its wireline business has shrunk slightly — in the last year, about 2 percent. 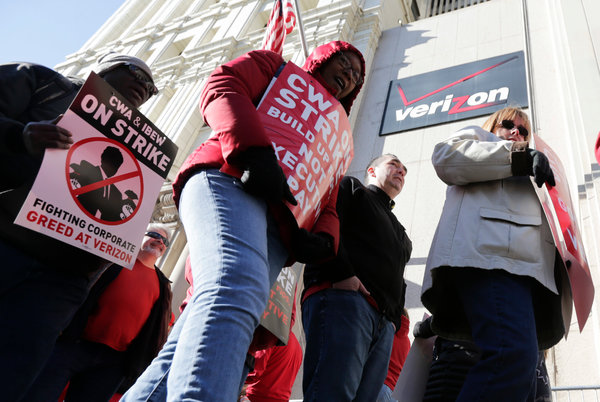 Striking workers outside a Verizon office in Albany on Wednesday.

At the same time, Verizon’s wireless margins are the highest in the industry. More than 40 cents of every dollar of revenue on the wireless side becomes cash flow.

Verizon’s strategic decisions reflect these diverging fortunes. In the last few years it has reduced investments in its wireline operations, even selling operations in California, Florida and Texas last year for $10.54 billion to Frontier Communications.

“At this point it’s treating wireline as a sort of cash cow rather than something to be invested in heavily, whereas wireless is where the future growth is,” said Jan Dawson, an independent technology analyst for Jackdaw Research.

Verizon has placed a big bet on the future of the wireless business. In 2013, Verizon Communications paid $130 billion to take full control of Verizon Wireless, in which it had previously shared ownership with Vodafone of Britain.

Yet these broad trends obscure some of the ways that Verizon could sustain and expand good-paying work even on the wireline side. Foremost is Fios, widely regarded as state of the art when it comes to broadband networks, and which the union and the company agree can serve as a foundation for sustaining desirable jobs.

But Verizon remains ambivalent about Fios. In 2004 the company pledged to lay fiber that could serve as many as 18 million homes. It fulfilled that plan according to its own measure, but has shown little desire in moving much beyond it, leaving several million households with little hope of getting access to the network. Until Verizon announced on Tuesday that it would be making Fios available throughout Boston, it had been several years since the company had committed itself to a major expansion.

Ian Olgeirson, an analyst at the media research firm SNL Kagan, said one reason for this reluctance to expand is that the rising price of television programming has put pressure on margins for video, which makes the economics of the entire fiber optics investment less attractive.

Still, there continues to be great demand for the broadband service, where margins are quite high. And while companies that invest in fiber optics like to see good returns on multiple services rather than just one to justify the expense, Mr. Olgeirson notes that some of Verizon’s competitors have not been deterred by this issue.

“You do see evidence of a little more enthusiasm for the wireline business at AT&T,” Mr. Olgeirson said.

Close to 36,000 Verizon workers on the East Coast have gone on strike after the company and two unions failed to reach an agreement on Wednesday. This is one of the largest strikes in recent years.

Given the potential social benefits of a broadband expansion — in terms of both jobs for those working on the network and opportunity for those using it — many experts see a rationale for a government role in at least nudging the process forward, even if the economics are too challenging for private carriers to undertake on their own. But this has not been forthcoming either.

“The F.C.C. doesn’t have an effective policy to build out broadband in the U.S.,” said Jeffrey Keefe, a professor emeritus at the Rutgers School of Management and Labor Relations, who has studied the telecom industry for decades. “Fios is a state-of-the-art broadband network. The F.C.C. has not provided the appropriate incentives.”

The two unions — the second is the International Brotherhood of Electrical Workers — have made no secret of their intention to also open a political front in the dispute. After the New York City government audited Verizon’s performance in building out its fiber optic network there, union leaders asked the City Council to hold hearings.

The unions also procured a letter from 14 mayors about the fiber optic issue and one from 20 United States senators urging Verizon to act as a “responsible corporate citizen” and negotiate fairly with its workers.

Even as the unions seek to build support from outside, they argue internally that there are several categories of jobs that could sustain middle-class lifestyles if the company were willing to think about them differently. One of the major points of contention between Verizon and its unions are call centers. The company currently outsources some of its customer service and sales calls to centers in lower-cost regions of the United States, and it is proposing rule changes that would allow it to do more of this.

But the cost savings that outsourced call centers appear to offer often prove illusory. Rosemary Batt, a professor at the ILR School of Cornell University who has extensively studied the moving of service work to call centers, says turnover is lower and performance and customer satisfaction are substantially higher when the work is done in-house.

“There are real opportunities to increase revenue by bundling and packaging different products,” she said, giving an example. “But you need a more sophisticated work force that’s trained and committed to the company to do that well. Outsourcing is penny-wise but pound-foolish.”

To be sure, the company is hardly oblivious to the good-jobs question. It is not seeking wage concessions, and officials there express genuine enthusiasm at the economic benefits that Fios confers on its workers. Tami Erwin, president of Verizon’s consumer and mass business unit, emphasized in an interview that the Boston expansion would mean a lot of “great high-paying work.”

But despite that expansion, the company’s overall posture does not appear to be intended to pursue a business model that maximizes the number of middle-class incomes it produces. Asked about the possible benefits of keeping call center workers in-house, Ms. Erwin said: “It’s my responsibility to make sure we’ve created an environment where people have the right tools, the right resources. If we do that, it doesn’t matter whether they’re a contractor or an employee.”

Correction: April 13, 2016 An earlier version of this article misstated the day of Verizon’s announcement that it would expand Fios service in Boston. It was Tuesday, not Monday.