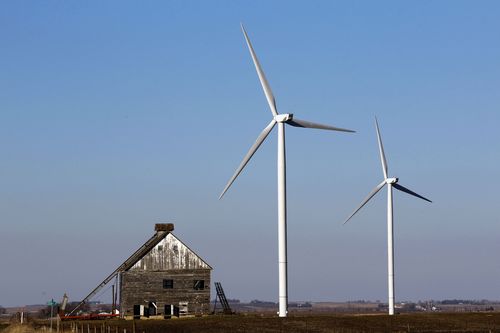 MidAmerican Energy took a giant, $3.6 billion step Thursday toward its goal of meeting all of its customers' power needs with green energy such as wind and solar.

With the investment, the Des Moines utility's largest, MidAmerican would get 85 percent of its energy from wind, CEO Bill Fehrman said Thursday at a press conference with Gov. Terry Branstad and Debi Durham, the state's economic development director.

"We have a dream to deliver 100 percent renewable energy to our customers," Fehrman said.

Officials with the Des Moines utility, already the nation's largest rate-regulated owner of wind energy, said the project would add up to 2,000 megawatts of wind generation.

"For customers, the benefits are clear: clean energy produced right here in Iowa using an abundant natural resource," Fehrman said. "Unlike coal or natural gas, renewable energy has no fuel costs associated with it. Harnessing the wind is free."

"Making 100 percent renewable energy a goal starts a new discussion about how to get there. It’s an important new direction," Baer said. "It recognizes that the renewable energy sources we have in Iowa are tremendous."

The request must go to the Iowa Utilities Board for consideration. The company hopes to get board approval by mid-September.

The project, with about 1,000 turbines, wouldn't be completely constructed until 2019. The turbines' location is still under consideration.

Fehrman said the utility's shift to wind has been dramatic since 2004, the first time it invested in wind energy generation.

"We didn't have any wind in our system, and coal made up 70 percent of our generation," Fehrman said. "By the end of this year, we will have built 4,048 megawatts of wind energy across 2,020 turbines."

The company has spent $6.6 billion on wind generation over the past 12 years. It will get close to 60 percent of its energy from wind by year's end.

Even with 100 percent of its energy from renewable sources, Fehrman said the investor-owned utility has no plans to retire its coal and natural gas plants.

"During times when the wind isn’t blowing — or isn't blowing enough — our coal plants, gas plants will be picking up the slack," Fehrman said

He said the company wants to to generate as much wind energy as its customers use annually.

"We will be able to certify to our customers that at least on an annual basis — not a minute-to-minute or hour-to-hour basis — we were able to deliver to you 85 percent of energy from renewable power.

"And hopefully we’ll get to 100 percent some time down the road," said Fehrman, adding that the utility will look to solar, energy efficiency, biomass and other sources to reach its goal.

Robert Brown, professor of mechanical engineering and director of the Bioeconomy Institute at Iowa State University, said the utility will still need a considerable amount of fossil fuel generation to back up its wind generation.

For 100 percent renewable generation, the country needs utility-scale battery storage, smart grid improvements that can shoot renewable energy across the nation and power plants that burn biomass — plants such as perennials, Brown said.

Fehrman agreed that renewable energy storage is critical to growing green energy use.

"Battery storage is a game-changer in this renewable energy environment," he said. "The issue today is that it’s very, very expensive."

MidAmerican said no other utility has "staked out this 100 percent position."

MidAmerican said the proposal puts the state in "a strong position to comply with carbon emissions limits." Iowa is required to reduce carbon emissions from its power plants by 42 percent under the federal Clean Power Plan, which is now being challenged in courts.

Branstad said the MidAmerican project "puts Iowa on track to be the first state in the nation to generate more than 40 percent of its energy needs from wind power — far ahead of any other state.

"Today, Iowa is the only state to have crossed the 30 percent mark,” Branstad said.

Durham called MidAmerican's goal "audacious," adding that it could be a significant economic development recruitment tool.

Leaders have said wind energy in Iowa has been critical to attracting Facebook, Google and Microsoft data centers to the state. The operations are huge energy users, and the tech companies want renewable energy to be a large piece of the portfolio.

"What these publicly traded companies need to show shareholders and customers, particularly millennials, is that a large part of energy portfolio is from renewable," she said. "That's a calling card that separates Iowa from other states."

The company has wind farms in operation or under construction in 23 Iowa counties and has partnered with more than 2,400 Iowa landowners to place the turbines.

Leaders said wind power supports as many as 7,000 jobs in Iowa.