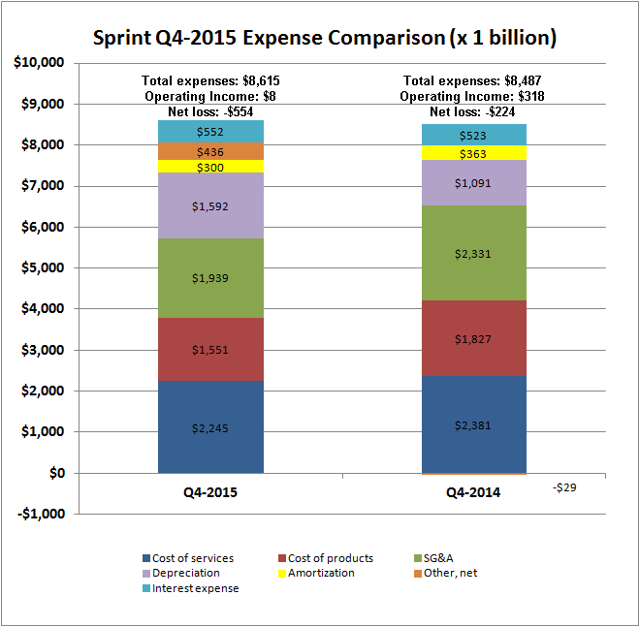 Sprint Corp. (NYSE:S) can spin the numbers however it wants. It can also selectively pat itself on the back for all the ways it outperformed rivals AT&T (NYSE:T) and Verizon (NYSE:VZ) last quarter. What the company can not do, however, is change the absolute number of dollars it has flowing out of its coffers relative to the number it has coming in. And it's from this overarching fiscal perspective where the wireless carrier's first quarter numbers begin to paint a familiar, troubling picture again.

Different, But the Same

In its defense, Sprint is trying to solve a Rubik's Cube. As was the case with the vexing toy from the 80s, every solution the company finds for one aspect of its business disrupts a different aspect of its business. Lower prices draw more customers in, but lower prices make it near impossible to squeeze a profit from those customers. Raining in capital expenditures beefs up the bottom line, but capital spending is necessary to create the network capacity needed to facilitate subscriber growth. Selling assets creates liquidity right now, but creates an even bigger financial burden later.

It's this reality that was largely overlooked on Tuesday following the release of Sprint's Q1 numbers. Shares gained a little more than 5% in the wake of the superficially good news, but upon closer inspection of all the numbers, it becomes clear that very little has changed for the better in terms of successfully marketing a wireless service that's sustainable... let alone profitable.

The highlights: For its fiscal year ending in March, Sprint turned an operating profit for the first time in nine years. It was an operating profit it's only $310 million, and on a net basis the company still lost nearly $2.0 billion. Given where the company was at this point a year ago though, measurable progress could be considered a success... at least in terms of direction.

Ditto for EBITDA. Indeed, last year's EBITDA of $8.1 billion was 36% stronger than the prior year's; the EBITDA in Q4 alone.

And on the cost-cutting front, Sprint touted the fact that it's already realized $1.3 billion worth of its planned $2.0 billion worth of savings for its and selling, general and administrative (SG&A) expenses.

Problem(s): The "D" in its EBITDA -- which isn't included in the company's operating income tally -- is taking a huge toll on the bottom line; the "I" isn't exactly tiny either. And, per-customer revenue is slipping, yet the cost delivering service to those customers isn't. Sprint is still technically on a path to insolvency without significant improvements in the way it attracts, retains, and serves its subscribers. So far, CEO Marcelo Claure only managed to move some things between and on the company's balance sheet and income statement, without making any actual Improvement where they needed to be made.

In that a picture says a thousand words, the graphic below that compare Sprint's Q4-2014 financial snapshot to the Q4-2015 reality tell the tale as well if not better than any written explanation.

What gives? A couple of things.

As for the ramp-up in depreciation expenses, that's simply the result of a switch from a subsidy-driven phone sales model to a lease-driven one. Sprint said it would happen pretty much the way it's panned out. From a bottom-line perspective, the maneuver will be nothing more than a wash in the end.

For the other increased expenses, well, the company may have culled SG&A costs, that means little if it's simply added cost elsewhere (which it did). Last quarter's GAAP net loss grew from -$224 million to -$554 million. The cost-cutting thus far has done more damage than good.

The company, along with a small but vocal group of shareholders (with a vested interest and exiting the positive and eliminating the negative), have already been quick to point out that in the recently-completed quarter the wireless carrier added more postpaid phone subscribers than AT&T or Verizon managed to.

And unlike Sprint, AT&T and Verizon didn't have to cut prices to rock-bottom levels to win customers over. Sprint's average revenue per postpaid user rolled in at $51.68 last quarter… the lowest figure in years, and accelerating an already alarming trend.

The company could own an entire universe of spectrum, and use it to spur liquidity in a myriad of ways. Until Sprint begins to Garner new customers numbering in the hundreds of thousands rather than the tens of thousands though - and until those new customers each start generating more revenue than they're generating now (which will require its own trend break) - none of the financial engineering will actually matter. At some point Claure must meaningfully grow the business . If it hasn't happened yet….

Disclosure:I/we have no positions in any stocks mentioned, and no plans to initiate any positions within the next 72 hours.

I wrote this article myself, and it expresses my own opinions. I am not receiving compensation for it (other than from Seeking Alpha). I have no business relationship with any company whose stock is mentioned in this article.
Source link