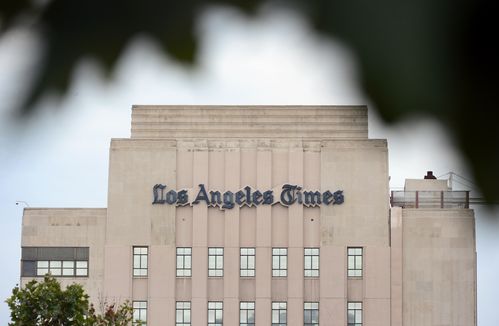 Tribune Publishing, which owns the Los Angeles Times, Chicago Tribune and nine other daily newspapers, said Wednesday its board of directors has rejected Gannett's $815 million offer to buy the company.

"Tribune Publishing’s board has unanimously determined that Gannett’s opportunistic proposal understates the company’s true value and is not in the best interests of its shareholders," Tribune said in a statement.

On April 25, Gannett, which owns USA TODAY and 107 local news properties, revealed its offer to buy Tribune Publishing for $12.25 per share and assume $390 million of Tribune's debt, bringing the total value of the bid to $815 million. Gannett CEO Robert Dickey, who submitted the offer in a private letter to Tribune's board on April 12, said he chose to go public with the offer due to Tribune's "continued refusal to begin constructive discussions with us."

Tribune's board has since hired bankers to review the offer, but its management has maintained that it prefers to run the company on its own with a new strategy formed by Michael Ferro, the company's chairman and its single-largest shareholder, and Tribune CEO Justin Dearborn.

"Tribune Publishing is in the early stages of a compelling transformation, with a well-defined strategic plan to drive increasing monetization of our important brands, capitalize on the global potential of the LA Times and significantly accelerate our conversion of content to revenue through an enhanced digital strategy,” Dearborn said in a statement Wednesday.

Tribune announced Wednesday that it had suffered a loss in the first quarter of this year.

Tribune's board is open to evaluating "any credible proposal," but for now, Tribune will begin executing its strategy that includes investing more in content and deploying "programmatic" advertising-buying technology more widely at its news properties, Dearborn said in a call with analysts Wednesday afternoon. As part of expansion, the L.A. Times plans to open seven foreign bureaus, including outposts in Hong Kong, Seoul and Mexico City.

Dearborn also said the company will create a business unit called Tronc to sell more digital ads. According to the U.S. Patent and Trademark Office’s record on Tribune’s trademarking of the term, the unit’s new services will include “compilation, production and dissemination of advertising matter” and “social media strategy and marketing consultancy services.”

"I believe we have a fundamental advantage in that we create more original curated content," Dearborn said.

“Likely, this will be a test of wills,” said Ken Doctor, a media analyst who writes about the news business at his site, Newsonomics.com. “Tribune chairman Michael Ferro will try to stonewall Gannett, while Gannett must decide how much public and legal pressure it is willing to exercise to win the company. I expect this test of wills will be decided sooner than later. In this case, while Tribune management passions may be high, the numbers are on Gannett's side — and numbers usually triumph in these cases.”

He added, “Given the poor Tribune revenues …Tribune has a hard time justifying a greater value for the company than Gannett has offered.”

As the earnings call began, analysts were told Dearborn wouldn't answer questions about the Gannett offer. Ferro, who became Tribune's board chairman in February after buying a 16.6% stake for $44.4 million and expanded the board to 10 members from seven, didn't participate in the call.

"Gannett’s opportunistic proposal understates the company’s true value and is not a basis for further discussion," Dearborn said. "The board is confident that the execution of our standalone strategic plan will generate shareholder value in excess of Gannett’s proposal.”

Tribune, based in Chicago, also said Wednesday it swung to a loss in the first quarter as rising circulation revenue couldn't offset an advertising sales drop and higher expenses.

Net loss for the three-month period ending March 27 totaled $6.5 million vs. $2.5 million of net profit a year ago.

Per-share earnings, after adjusting for some items, including employee buyout costs, were 23 cents, below 25 cents estimated by analysts who were polled by S&P Global Market Intelligence.

Revenue was relatively flat at $398.2 million.