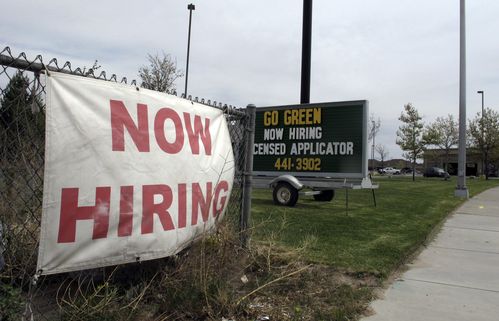 The Labor Department is due to release its April jobs report on Friday.

Several top analysts expect the government to report strong job growth on Friday despite a disappointing private-sector survey, a development that would reinforce the belief that the economy is poised to pick up after two weak quarters.

Payroll processor ADP said Wednesday that businesses added 156,000 jobs in April, well below the 195,000 economists expected and a possible red flag that the sluggish economy is finally dragging down the resilient labor market.

But economists project the Labor Department’s survey of the public and private sectors, due out Friday, will record 200,000 job gains for last month, according to the median estimate of those surveyed by Bloomberg. ADP’s tally has often varied significantly from Labor’s, though the two reflect similar broad trends.

High Frequency Economics, Barclays Capital and JPMorgan Chase expect Labor to announce job gains of 240,000 to 250,000 Friday, above the 209,000 monthly average so far this year. They largely point to initial jobless claims, a reliable gauge of layoffs, that continue to hover near 42-year lows. And the Institute for Supply Management said Wednesday that its measure of service-sector employment reflected more hiring last month.

The labor market has held up remarkably well, defying weak economic growth of 1.4% at an annual rate in the fourth quarter of 2015 and a meager 0.6% in this year’s first quarter. A listless global economy, strong dollar and low oil prices have hampered U.S. exports and the production of crude and related products such as steel pipes. Those headwinds typically hamper larger companies more than small businesses, which, the ADP report showed, continued to hire briskly.

Of greater concern is that consumer spending — which makes up 70% of economic activity — also has slowed. That has stoked worries that monthly payroll growth topping 200,000 a month may dip.

Meanwhile, both the dollar and oil prices have stabilized, while a sharp retreat in business stockpiling is mostly played out, says Jim O'Sullivan, High Frequency's chief U.S. economist.

Hurwitz also notes that the government has at least partly attributed a pattern of weak first-quarter growth to insufficient seasonal adjustments in the volatile cold-weather months. And many economists believe the labor market provides a better barometer of the economy than gross domestic product, which can be difficult to measure.

A report Friday of at least 200,000 or so payroll gains likely would dispel concerns of a weakening economy, O’Sullivan says.  At the same time, he says, a disappointing tally “is going to be viewed as evidence the (job growth) trend is slowing.” Job gains of 150,000 or fewer likely would help dissuade an already-cautious Federal Reserve from raising interest rates again in June, he says. The Fed lifted its benchmark rate in December for the first time in nine years but has stood pat since.