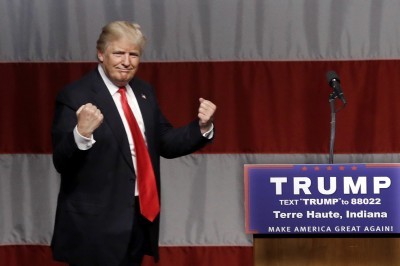 FILE - In this Sunday, May 1, 2016 file photo, Republican presidential candidate Donald Trump reacts to a song during a campaign rally at the Indiana Theater in Terre Haute, Ind.

An aide to the GOP’s 2012 presidential nominee confirms that Romney isn’t planning to attend the convention where Donald Trump is expected to become the Republican Party’s 2016 presidential nominee. The aide spoke on the condition of anonymity to share internal discussions.

Romney has been an aggressive critic of Trump. The former Massachusetts governor vowed earlier in the year that he’d rather write someone in than vote for Trump in the general election.

Trump became the GOP’s presumptive nominee this week after both of his remaining rivals dropped out of the race.

Freshman Republican Sen. Ben Sasse says America should draft an alternative to Donald Trump and Hillary Clinton, someone who would be an “honest leader” and “an adult.”

“Why are we confined to these two terrible options?” Sasse writes in a manifesto titled “An Open Letter to Majority America.”

“This is America. If both choices stink, we reject them and go bigger. That’s what we do,” he says.

Sasse, who has been an outspoken critic of Trump, doesn’t offer a preferred candidate —although over Twitter he’s mentioned former Oklahoma Sen. Tom Coburn.

But he says after discussions with his constituents it’s clear that voters want a better option. Nebraska’s Republicans have yet to vote in the presidential election; their primary is May 10.

Donald Trump says he has nothing against Janet Yellen but would likely replace her as Fed chair once her term is up.

In an interview with CNBC, the likely Republican presidential nominee says he thinks it would be appropriate for him to nominate someone else to lead the Fed since Yellen is not a Republican. President Barack Obama selected Yellen to succeed Republican Ben Bernanke. Her four-year term as Fed leader ends on Feb. 3, 2018.

Trump says he has “absolutely nothing against” Yellen, calling her a “very capable person.” While Yellen’s term as chair ends in 2018, she could remain as a governor on the Fed’s seven-member board. Her 14-year term as a Fed board member does not end until Jan. 31, 2024.

Trump is a celebrity businessman who largely financed his primary bid through personal loans to his campaign. He says that while he will continue to put up “substantial money,” he must also develop a more traditional fundraising approach now that he is likely to face off with Democrat Hillary Clinton in the general election.

Trump says in a statement that he has worked with Mnuchin “in a business capacity. Mnuchin “brings his expertise in finance to what will be an extremely successful fundraising operation for the Republican Party,” Trump says.