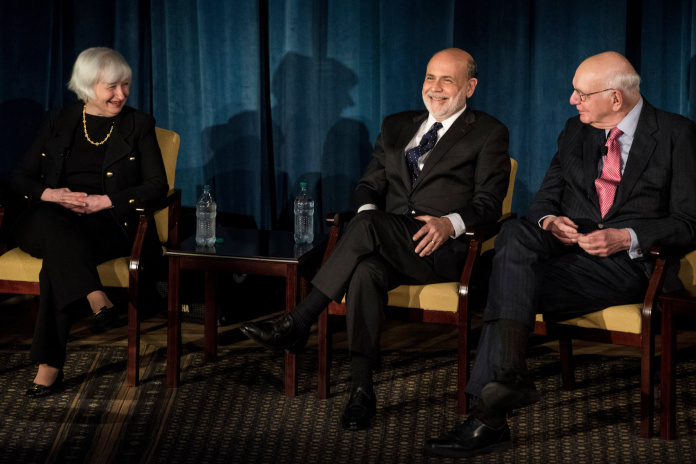 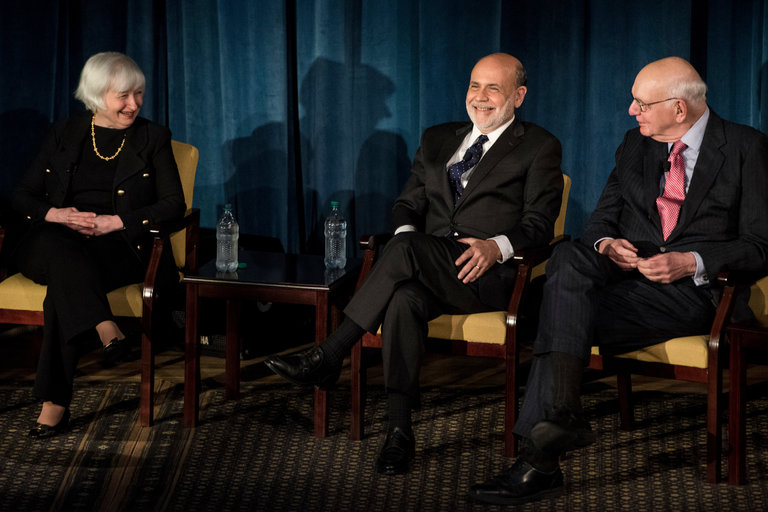 Janet Yellen with the former Fed chairs Ben Bernanke, center, and Paul Volcker. Donald Trump said he would most likely replace her as Fed chairwoman if he became president.

Donald Trump emphasizes his business savvy as a reason to make him president. In a phone interview with CNBC on Thursday, he showed both the strengths and limitations of this background as he talked about the Federal Reserve, the dollar and the national debt in more detail than he has before.

In short, he showed clarity and consistency in talking about monetary policy and the dollar. But he also made an offhand comment that, if taken literally, would amount to rejecting the very underpinnings of the global financial system and would threaten to undermine the United States’ two centuries of creditworthiness.

Win some, lose some?

Mr. Trump was asked whether he would reappoint Janet Yellen as Fed chairwoman (her term is set to expire Jan. 30, 2018, about a year after the next president takes office). “I have nothing against Janet Yellen whatsoever,” he said. “I don’t know her. She’s a very capable person. People that I know have a very high regard for her. But she’s not a Republican.

“When her time is up, I would most likely replace her because of the fact that I think it would be appropriate.”

Still, Fed watchers have assumed that if a Republican wins the 2016 election, the new president will appoint a new Fed leader. More interesting is that Mr. Trump seems to favor a new Fed chair who continues the low-interest-rate policies of Mr. Bernanke and Ms. Yellen.

That gets the economics of the current American monetary policy dilemma pretty much right. As the Fed moved toward interest rate increases last year, when other global central banks were trying to ease policy, it created steep upward pressure on the dollar. That in turn hammered American exporters, undermining growth here.

It also caused strains across the global economy. Because the dollar is the global reserve currency and because debts around the world are denominated in the currency, a stronger dollar meant tighter money in countries from China to Brazil.

It was in no small part due to this effect that the Fed has slowed the pace of rate increases from what it envisioned late last year.

Moreover, if you agree with Mr. Trump’s oft-repeated views that China and other countries seize unfair advantage in trade by depressing their currencies (economists generally argue that’s not the case with regard to China at present, but it has been in the recent past), you should want low-interest-rate policies out of the Fed. “While there are certain benefits, it sounds better to have a strong dollar than it actually is,” he said.

That’s in contrast with many leading conservatives, like Paul Ryan and Ted Cruz, who have favored tighter money and a stronger dollar for the last several years.

Things got messier when Mr. Trump talked about his view of the national debt, seeming to apply his experience renegotiating with creditors for his casinos and hotels to the world of Treasury debt. “We’re paying a very low interest rate — what happens if that interest rate goes up 2, 3, 4 points?” he said. “We don’t have a country. We have tremendous debt, tremendous.” He advocated shifting toward longer-term debt, locking in current low interest rates for the federal government.

That isn’t unreasonable. The federal government’s budget could be strained if interest rates rise — though a world in which rates rise significantly is probably a world in which there is also strong economic growth, higher inflation or both. Either would mean more tax revenue, which would make the debt manageable despite higher rates.

But Mr. Trump also suggested something that would represent a radical shift in United States policy if we take him seriously. “I’ve borrowed knowing that you can pay back with discounts,” he said. He added, “Now we’re in a different situation with the country, but I would borrow knowing that if the economy crashed, you could make a deal.”

He specified later that he didn’t mean renegotiating bond terms, which countries like Argentina and Greece have done repeatedly. What he says he meant was buying back bonds at discounts after rates have risen, much as a company at risk of bankruptcy might buy its own bonds back at, say, 70 cents on the dollar and thus reduce what it owes. “I don’t want to renegotiate the bonds, but I think you can do discounting,” he said.

But typically the kinds of discounts on bond prices he is talking about occur when a country or company is at high risk of defaulting on its obligations. And to even threaten that would be a rejection of a principle that dates to Alexander Hamilton and the founding of the republic — that the United States’ promise to make good on its obligations is ironclad. Threatening to repudiate American government debts could also arguably violate a provision of the 14th amendment of the Constitution.

It is that reputation for creditworthiness and reliability that has made United States Treasury bonds the bedrock of the global financial system — a crucial difference between American government debt and the likes of Argentina’s, or, for that matter, the kind of debt owed on a failed casino project.

“I am the king of debt,” Mr. Trump said. “I love debt, I love playing with it. But now you’re talking about something that’s very, very fragile, and has to be handled very carefully.”