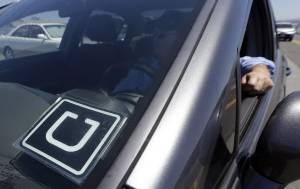 N.J. bills aim to catch up with Uber, Lyft 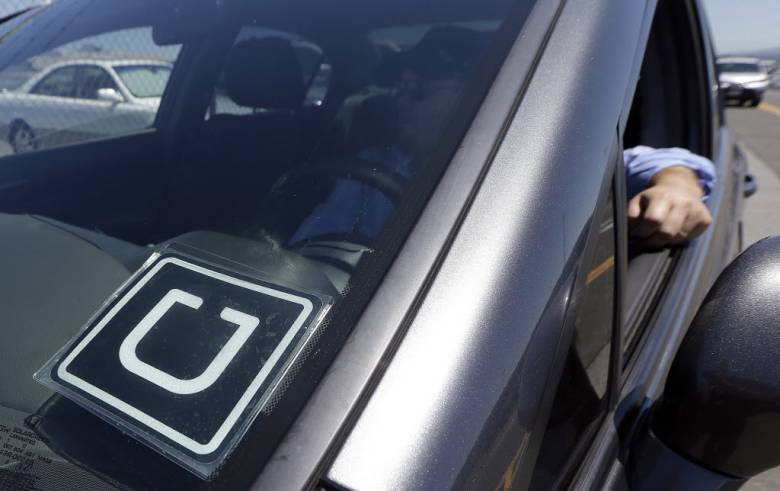 An Uber driver at San Francisco International Airport. Fingerprinting of drivers - required for New Jersey taxi drivers - is a sticking point between legislators and the company.
By JOHN C. ENSSLIN
STATE HOUSE BUREAU

Applications that allow people to use smartphones to summon a driver at a moment’s notice have soared in popularity in recent years.

And as companies like Uber and Lyft have altered the transportation landscape with these ride-hailing services, efforts to regulate them in New Jersey have trailed behind their fast-evolving business models.  As with other technological advances — like electric cars and apps that allow people to rent their homes to vacationers — lawmakers acknowledge they have been playing catch-up.

That may soon change when it comes to ride-hailing platforms.

Lawmakers in both houses of the Legislature last week introduced bills aimed at creating a regulatory framework that they say will allow these companies to operate while imposing new licensing requirements.

“Clearly the industry got ahead of government — there’s no doubt about that,” said Sen. Paul Sarlo, D-Wood-Ridge, sponsor of the Senate bill.  Assemblyman Joseph Lagana, D-Paramus, sponsor of the Assembly bill, agreed it took lawmakers awhile to understand the new business model.

“From the beginning, it was difficult to determine if this was a new transportation company,” Lagana said. “Or is this a technology company?”

The popularity of ride-hailing services “exploded — it blew up,” Lagana said. “What’s happened is we’ve now had to catch up with legislation.”  Assemblyman Tim Eustace, D-Maywood, said the rapid rise of such services as Uber, Lyft and the vacation rental app Airbnb have led him to include the phrase “or current technology,” whenever he drafts a bill.

“So that we leave the door open for using the newest technology as opposed to going back and reinventing the wheel and having to rewrite each law to include what’s permissible,” Eustace said. “It’s almost a waste of money not to include that.”

With the ride-hailing legislation, both the Senate and Assembly bills contain similar requirements on insurance coverage, permit fees and record-keeping inspections. Both give drivers the ability to move freely from one town to another and prevent cities and counties from imposing their own regulations and fees.

But the bills differ in one important respect that could become a flashpoint of contention: the use of fingerprints as the basis for criminal background checks.

The Assembly bill sponsored by Lagana, Troy Singleton, D-Burlington, and John Wisniewski, D-Middlesex, would require that drivers be fingerprinted unless the companies can convince the state police that they have an acceptable alternative background check.

“Isn’t it the best policy to use the gold standard of criminal background checks in determining whether or not a person should be picking up passengers?” Lagana said.  But representatives for Uber and Lyft say they use computer-based criminal background systems that are as effective, if not more so, than the traditional fingerprint-based searches.

Lyft offered a white paper by a former Baltimore police chief who argued that fingerprint background searches are flawed and inefficient.

Both companies have resisted such efforts in other states and cities to the point of withdrawing their business from those areas.

“Any inclusion of fingerprint requirements would kick Uber out of New Jersey, just as similar measures have forced Uber out of Kansas; San Antonio, Texas; Broward County, Fla.; and most recently Austin, Texas,” Uber spokesman Craig Ewer said in an email.  But both companies say they welcome the New Jersey lawmakers’ attempts at regulating their business.

“New Jersey deserves a permanent statewide ride-sharing framework that provides clarity for drivers and passengers,” Lyft spokesman Chelsea Wilson wrote in an email. “We are pleased that the State House is weighing these proposals and are confident that legislators will soon pass one comprehensive ride-sharing solution.”

The Senate bill, sponsored by Sarlo and Sen. Joseph Kyrillos, R-Monmouth, would require drivers to submit to a criminal history check by a “certified background screener.” But it does not include any fingerprint requirements.

“I’m not vehemently opposed to any fingerprinting down the line,” Sarlo said last week. “But I think this is a good starting point.”

But the lack of that provision drew opposition from representatives of the taxi industry and limousine drivers.

“Anything less than a fingerprinted background check is not to be trusted and puts the public at risk,” said Jason Sharenow, president of the Limousine Association of New Jersey.

He noted that limo and taxi drivers as well as a host of other professionals in New Jersey have to be fingerprinted as a requirement of obtaining a license.  The Senate bill is more in line with the laws in 35 states that have adopted some form of ride-hailing legislation. None require fingerprinting, said Douglas Shinkle, transportation program director for the National Conference of State Legislatures.

However, he said that could change now that some cities, including New York and Houston, have adopted the fingerprinting requirement and others, like Atlanta and Los Angeles, have discussed doing so.

Shinkle said most state legislatures had reacted quickly to the fast-emerging ride-hailing businesses.

“They just wanted the basic regulatory framework in place in recognizing the kind of value of these transportation services,” Shinkle said.

New Jersey’s early attempts at drafting regulations got off to a bumpy start in March 2015 when both Uber and taxi drivers staged a noisy, dueling set of protests outside the State House in Trenton. Earlier versions of the Assembly bill stalled and did not come to a floor vote.