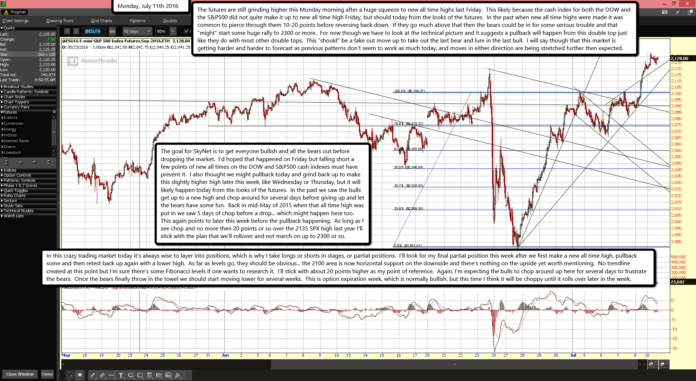 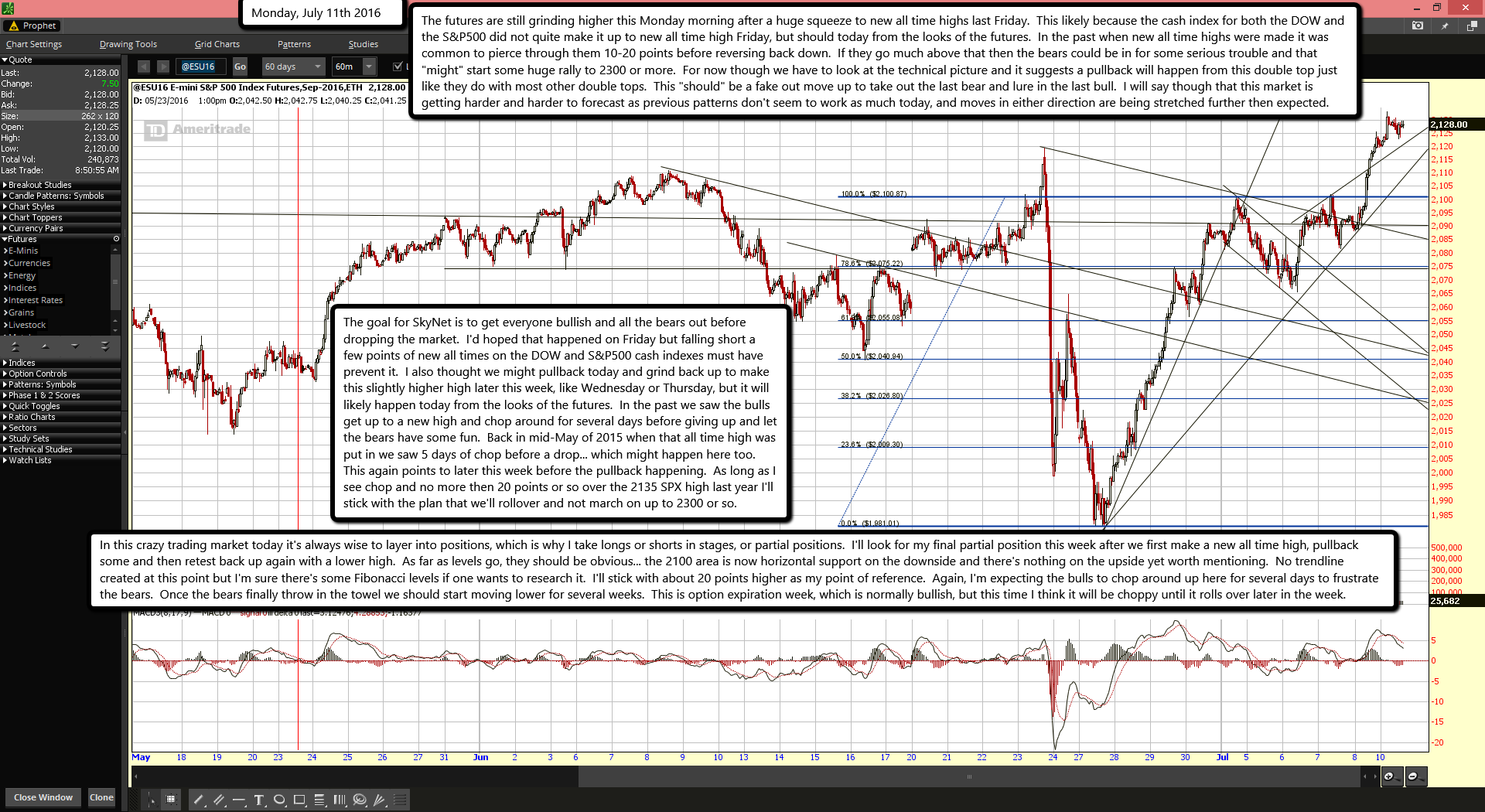 The futures are still grinding higher this Monday morning after a huge squeeze to new all time highs last Friday.  This likely because the cash index for both the DOW and the S&P500 did not quite make it up to new all time high Friday, but should today from the looks of the futures.  In the past when new all time highs were made it was common to pierce through them 10-20 points before reversing back down.  If they go much above that then the bears could be in for some serious trouble and that "might" start some huge rally to 2300 or more.  For now though we have to look at the technical picture and it suggests a pullback will happen from this double top just like they do with most other double tops.  This "should" be a fake out move up to take out the last bear and lure in the last bull.  I will say though that this market is getting harder and harder to forecast as previous patterns don't seem to work as much today, and moves in either direction are being stretched further then expected.

The goal for SkyNet is to get everyone bullish and all the bears out before dropping the market.  I'd hoped that happened on Friday but falling short a few points of new all times on the DOW and S&P500 cash indexes must have prevent it.  I also thought we might pullback today and grind back up to make this slightly higher high later this week, like Wednesday or Thursday, but it will likely happen today from the looks of the futures.  In the past we saw the bulls get up to a new high and chop around for several days before giving up and let the bears have some fun.  Back in mid-May of 2015 when that all time high was put in we saw 5 days of chop before a drop... which might happen here too.  This again points to later this week before the pullback happening.  As long as I see chop and no more then 20 points or so over the 2135 SPX high last year I'll stick with the plan that we'll rollover and not march on up to 2300 or so.

In this crazy trading market today it's always wise to layer into positions, which is why I take longs or shorts in stages, or partial positions.  I'll look for my final partial position this week after we first make a new all time high, pullback some and then retest back up again with a lower high.  As far as levels go, they should be obvious... the 2100 area is now horizontal support on the downside and there's nothing on the upside yet worth mentioning.  No trendline created at this point but I'm sure there's some Fibonacci levels if one wants to research it.  I'll stick with about 20 points higher as my point of reference.  Again, I'm expecting the bulls to chop around up here for several days to frustrate the bears.  Once the bears finally throw in the towel we should start moving lower for several weeks.  This is option expiration week, which is normally bullish, but this time I think it will be choppy until it rolls over later in the week.