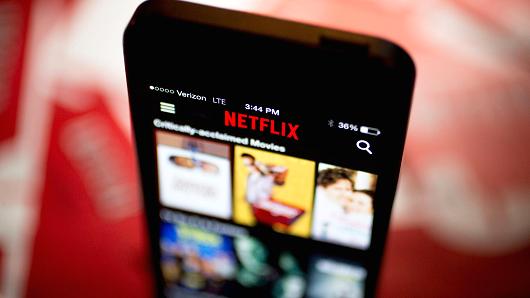 Netflix app on a mobile phone

The company reported in its Q2 letter to shareholders on Monday that it added 1.7 million subscribers, a steep drop from its forecast of 2.5 million. The U.S. added 160,000 subscribers compared to projection of 500,000, while international subscriber additions totaled 1.5 million compared to the 2.0 million forecast. The stock, already down year-to-date, sank in the after hours, dropping more than 15 percent.

The company said that while total additions were on target, the unsubscribing rate was "up slightly and unexpectedly." Netflix claimed the churn was tied to press coverage in April around its plans to raise prices for long-term members, saying that consumers thought the price effect would occur immediately instead of over a longer period. (The price increase should be completed by the end of the year, the company said on its earnings call.)

Thompson Reuters consensus estimate was $2.11 billion in revenue, with the company expected to post earnings of 2 cents a share.

Still, many analysts are undeterred. EMarketer senior analyst Paul Verna said Netflix is on the right path, but the fact it is so subscription-based makes its model a little more risky than their competitors like Amazon or YouTube, which have more kinds of revenue streams.

"Amazon has a lot of money to invest in content," said Verna. "They're not looking for the content subscriptions on their own. They're looking to drive e-commerce, and content is part of a much bigger strategy. For Netflix, content is everything."

Mike Goodman, director of digital media strategies for Strategy Analytics, said this earnings report was especially telling for Netflix considering it hasn't met expectations for two quarters. Goldman said Netflix had hit its saturation point for subscribers in the U.S., but the real sign for growth was among international numbers. With lower than expected rates in that realm, the future is a bit murkier for Netflix.

"I don't want to paint a major black cloud over the top of Netflix," Goodman said. "In general, I think they are very strong company, but they're facing growing pains."

The company also has a potential goldmine in distribution revenue if it continues to produce original content that people want to watch.

The model echoes HBO's business plan, said TruOptik CEO Andre Swanson. It wasn't until the network released "The Sopronos" in 1999 — 27 years after it launched — did it start deriving revenue from original content.

"Syndication has historically been a big part of the television industry – and you have to think of Netflix as a television channel. They're not an over-the-air broadcaster. They're distribution channel is online in terms of the way they operate their business, but their ability to own content helps them better monetize. "

Already, Netflix has developed a respectable slate of original series like "Orange is the New Black," "House of Cards" and "Making A Murderer." It confirmed that it it would continue to do so. These shows and movies can be a draw for international viewers attracted to English-language programming, and can help increase subscriber rates. It also gives Netflix a large opportunity for TV distribution rights revenue in different countries.

In addition, the company is working on developing more non-English language series and films in more than a dozen countries, including Brazil, Germany, India, Italy, Japan, Mexico, Columbia, South Korea, Argentina and Spain. Earlier this year, it announced a deal with Univision to broadcast "Narcos," (which is mostly in Spanish, as well as a joint production for an upcoming "El Chapo" series.

Still, it could be little longer until we see Netflix's true potential.

"[Distribution revenue] is another one of those things that doesn't show up immediately," Verna said.