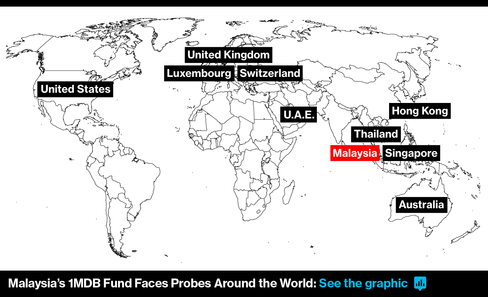 More than $3.5 billion traveled a trail of fraud from Malaysia through a web of shell companies, with some fueling a spending binge on Monet paintings and luxury real estate and at least $700 million flowing back into accounts controlled by Malaysia’s prime minister.

Some of the money was handled by international banks including Goldman Sachs Group Inc., JPMorgan Chase & Co., Standard Chartered Plc and Deutsche Bank AG. A chunk of it funded a Hollywood blockbuster, “The Wolf of Wall Street.” More than $13 million of it was wired to an account at a Las Vegas casino by a stepson of Malaysia’s prime minister who gambled with an unidentified actor whose description matches that of Leonardo DiCaprio.

It’s all laid out in a dozen filings Wednesday by U.S. prosecutors who detailed an alleged scheme of international money laundering and misappropriation stretching from 2009 to 2015. The Justice Department is seeking to seize more than $1 billion worth of assets it says went through U.S. banks from Malaysian development fund 1Malaysia Development Berhad, known as1MDB, and was ultimately used to illegally acquire assets.

The U.S. complaints lays the groundwork for tension with Malaysia, a longtime ally on issues including counterterrorism and trade. Prosecutors refer to a top Malaysian official who controlled accounts that received hundreds of millions of dollars. The official isn’t accused of wrongdoing.

The anonymous description lines up with that of Prime Minister Najib Razak, who until a few months ago served as the chairman of 1MDB’s advisory board.

It’s unclear how local law enforcement will respond in Malaysia, where officials have taken pains to keep criticisms from surfacing, have cleared Najib of any wrongdoing and closed its own investigations. U.S. prosecutors sought to recover assets they linked to Najib’s stepson, Riza Aziz, and other associates.

The prime minister didn’t immediately respond to a request for comment. He has consistently denied wrongdoing.

“Unfortunately and tragically, a number of corrupt officials treated this public trust as a personal bank account,” Attorney General Loretta Lynch said at a news conference in Washington. The civil action and asset seizures represent the “largest single action ever brought” by the Justice Department’s six-year-old Kleptocracy Asset Recovery Initiative, she said.

Lynch declined to comment on the identity of the unnamed top Malaysian official.

1MDB said in a statement that it will fully cooperate with investigators and had not been contacted by the Justice Department. It said it “is not a party to the civil suit, does not have any assets in the United States of America, nor has it benefited from the various transactions described in the civil suit.”

Also on Wednesday, Swiss authorities said U.S. prosecutors had sent them a request in May for information about bank accounts that might have been used to move money from the fund.

The U.S. complaints also lay out how a handful of global banks, while not accused of wrongdoing, were ensnared as hundreds of millions bounced between a web of shell companies. Money was pilfered from the government fund based on false representations made by 1MDB officials and representatives of the shell companies, prosecutors said. Even when bank officials raised questions about the beneficiaries of various accounts, compliance departments were unable to detect or halt the alleged fraud.

The diverted cash was used to purchase a breathtaking catalog of loot that prosecutors moved on Wednesday to seize. There’s a stake in the Viceroy L’Ermitage Beverly Hills Hotel as well as homes, condos and penthouses from Los Angeles and Beverly Hills to Manhattan’s Central Park South to London’s Belgravia. There’s a $35 million Bombardier jet, as well as more than $200 million worth of art -- a pen-and-ink drawing by Vincent Van Gogh (“La Maison de Vincent a Arles”) and two Claude Monet paintings, including a pastel study of water lilies, “Nympheas Avec Reflets de Hautes Herbes.”

And in a twist worthy of Hollywood, the U.S. is also laying claim to profits and royalties from a movie about wealthy abandon: It says that more than $100 million in funds from 1MDB went to finance 2013’s “The Wolf of Wall Street,” by Red Granite Pictures Inc. -- a production company co-founded by Najib’s stepson, Riza.

1MDB in April said it had “never invested in nor transferred funds to Red Granite Pictures, whether directly or via intermediaries,” and has denied wrongdoing more broadly over its finances. Red Granite said in May that all money it received had been proper and from a variety of sources including top-tier U.S. commercial and investment banks.

At the heart of the scheme, the U.S. alleges, was a small coterie of Malaysians led by a Malaysian financier named Low Taek Jho. They diverted money from 1MDB into personal accounts disguised to look like legitimate businesses, the U.S. said, and kicked back some of those funds to officials. Low, who has been linked socially with Paris Hilton and is a close friend of Riza, has said he provided consulting to 1MDB that didn’t break any laws.

In one of the complaints filed in federal court in California, running 136 pages, federal prosecutors alleged the unnamed top official whose description matches Najib’s received payments of $20 million in 2011, $30 million in late 2012 and then $681 million in March 2013. In August 2013, prosecutors said, some $620 million was transferred out of the top official’s account and back into an account controlled by one of the defendants in the U.S. actions.

Najib stepped down from his role as chairman of 1MDB’s advisory board when it wasdissolved in May. He is also the country’s finance minister. The Ministry of Finance is the sole shareholder of 1MDB.

The Malaysian attorney general said this year that the $681 million that appeared in Najib’s accounts before the 2013 election was a personal contribution from the Saudi royal family and that most was later returned. He cleared Najib of wrongdoing. Saudi Foreign Minister Adel Al-Jubeir said in April that the large donation to Najib was “genuine,” and Saudi authorities were aware of the gift which came without strings.

The Justice Department account contradicts that statement. The $681 million came from Tanore, an entity controlled by a friend and associate of Low’s. Najib paid the money back to Tanore, according to the complaint.

The Malaysia fund is at the center of several international investigations into alleged corruption and money laundering by public officials. Prosecutors in at least four countries -- Singapore, Switzerland, Luxembourg and the U.S. -- are looking into money flows from the investment vehicle, which was established for national development.

The suspected fraud occurred in three phases in which money was laundered through bank accounts in Singapore, Switzerland, Luxembourg and the U.S., prosecutors said.

In 2009, after 1MDB was set up to pursue development projects, officials of 1MDB and others, under the pretense of investing in a joint venture between 1MDB and a Saudi oil company, transferred more than $1 billion to a Swiss bank account, according to the Justice Department.

In 2012, 1MDB officials and others diverted proceeds raised through two separate bond offerings arranged by Goldman Sachs Group Inc., according to the Justice Department. More than 40 percent of the proceeds, or $1.4 billion, were transferred to a Swiss bank account belonging to a British Virgin Islands entity. More than $1 billion was diverted from another bond offering arranged by Goldman Sachs in 2013.

Goldman Sachs, which enjoyed a lucrative relationship with 1MDB, did the bidding for fund officials even as many Goldman employees questioned whether Low was involved, prosecutors said. The bank also circulated misleading offering statements when raising money for 1MDB, though the complaint doesn’t indicate that Goldman employees were aware of whether the statements were misleading.

Goldman Sachs said in a statement: “We helped raise money for a sovereign wealth fund that was designed to invest in Malaysia. We had no visibility into whether some of those funds may have been subsequently diverted to other purposes.”

E-mails and recorded phone calls between 1MDB and several banks show how billions of dollars were siphoned out of 1MDB accounts under false pretenses, according to the complaints, underscoring the weaknesses of bank compliance systems.

A handful of global banks were used to shift money improperly without confirming who the recipients were, other than information provided by 1MDB, according to the complaint. At times, when compliance officers raised questions, they were brushed aside and the transfers were eventually approved.

In one phone call cited in the documents, prosecutors say a 1MDB employee pressed a Deutsche Bank supervisor to approve transfers into Swiss accounts, complaining he was “under tremendous pressure” to get the deal done.

“Let me must convince my compliance person,” the Deutsche Bank employee said, according to prosecutors. ”It’s a little bit sticky with this.”

”They cannot wait for this, you know,” the 1MDB official added. ”If they’re going to overkill on the compliance thing, uh, they have to be responsible, you know.”

The transaction went through.

Low or his associates used some of the misappropriated funds to buy artworks, the complaint alleges. Low then used part of his collection -- which he valued at more than $300 million, according to an e-mail cited in the complaint -- as collateral for a loan from Sotheby’s Financial Services, a unit of Sotheby’s.

He used 17 pieces, including the two Monets and the Van Gogh, to secure a loan of $107 million loan that went to a company owned by Low, according to the complaint.

Sotheby spokeswoman Lauren Gioia said the company always cooperates with government investigations. “As set forth in the complaint, Sotheby’s has no continuing security interest or relationship to the three works that are the subject of the action, and is not in a position to comment on any potential seizure,” she said.

Low and Riza were also at the center of a gambling spree in Las Vegas in July 2012, using money that had come through 1MDB, according to prosecutors. A few weeks after Riza wired $41 million from a Red Granite account to one controlled by an associate, Eric Tan, the two of them went to Vegas, where over several days they wired $13 million into an account maintained by Las Vegas Sands Corp., the parent of the Venetian Casino.

Sands, which hasn’t been accused of wrongdoing, declined to comment.

The two of them -- joined by Low and a producer of the “Wolf of Wall Street” -- gambled at the Venetian for three days. They were joined on July 15 by what the complaint identifies as a lead actor in the film, who it noted ultimately won a Golden Globe award for his performance.

That actor is DiCaprio, who isn’t accused of wrongdoing. His publicist, Shawn Sachs, didn’t immediately respond to a request for comment.