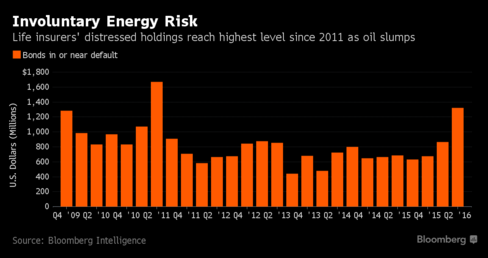 North American life insurers have accidentally doubled their distressed-debt holdings in just six months. In the future, they are poised to build on that mound by design.

Companies including Prudential Financial Inc. and MetLife Inc. held $1.32 billion of bonds that were in default, or close to it, at the end of the second quarter, their highest level since the middle of 2011, according to Bloomberg Intelligence data.

They did not intend to buy distressed debt: In many cases they bought investment-grade bonds from energy drillers and retailers that ended up heading south. Insurance companies’ trouble with these bonds underscores how even conservative investors have been hurt by plunging oil prices.

In the coming years, the companies are likely to buy more risky junk debt, said David Havens, a bond analyst covering insurers at brokerage Imperial Capital. For one thing, they need the income as central banks globally keep bond yields low, cratering investment returns for the industry. Also, proposed regulatory changes may make it cheaper for insurers to own the bonds, he said.

"They don’t really have a lot of alternatives to buying this stuff in this environment," Havens said on the telephone in an interview. While insurers are unlikely to buy more distressed bonds, they will probably buy more junk-rated debt that is at least four steps below investment grade, he said. That debt is more likely to fall to distressed levels when the credit cycle changes for the worse.

Energy bonds looked fairly safe to many insurers because oil and gas companies had high levels of assets relative to their debt, according to Mike Collins, a portfolio manager at Prudential’s fixed income unit, which oversees $652 billion for external investors. But as oil prices have plunged, so has the value of the assets, and the bonds have proven to be far riskier than they appeared, Collins said. He was speaking generally and not about Prudential in particular.

“I don’t think anybody expected oil to fall as much as it did,” Collins said, referring to the price of a barrel of oil, which plunged from more than $100 in 2014 to less than $26 in February. “That caught a lot of people by surprise, and a lot of companies have gone from looking like they’re in great shape to distressed very quickly."

Prudential Financial held $535 million of distressed debt measured by fair value in the second quarter, the most of any insurer in the peer group tracked by Bloomberg Intelligence in absolute terms but less than one tenth of a percent of its overall assets. The company had $383 million of distressed bonds at the end of 2015.

Distressed bonds are a small percentage of most life insurers’ investments, accounting for less than a tenth of a percent of the industry’s assets, and the companies can hold onto them for a long time, giving them leeway to work out difficulties and recover as much money as possible. The firms are refraining from taking excessive risk now, said Peter Wirtala, a strategist at Asset Allocation & Management Co., which manages $17.9 billion for about 100 insurance clients.

"Even as urgently as everyone needs yield, they’ve been cautious on the asset front," Wirtala said.

Still, distressed assets are likely to keep piling up at insurers as the price of oil remains around $40 a barrel, said Sasha Kamper, a senior research analyst focusing on distressed holdings at Principal Financial Group Inc.’s asset manager.

"We are near the peak of the credit cycle, and we will expect to see increased defaults going forward," Kamper said.

S&P Global Ratings said on Thursday that 111 companies globally have defaulted so far this year, the highest number since 2009, during the financial crisis. Energy and natural resources account for about 53 percent of those defaults.

Even if distressed holdings are largely accidental now, regulators are considering proposals that could ease the amount of capital life insurers can use to fund junk bonds, which makes it more profitable for the companies to increase their investment risk. Life insurance companies are seeking more income as low bond yields globally corrode their investment returns. 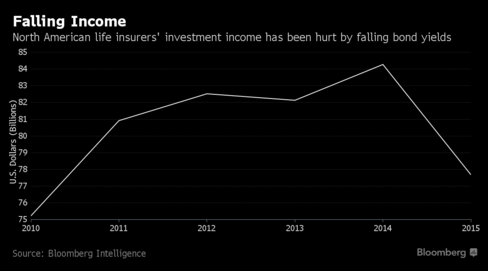 Under current rules from the National Association of Insurance Commissioners, which sets standards for the U.S. industry, a bond with a rating four steps below junk needs to be funded with capital equal to at least 10 percent of the bond’s value before taxes. The NAIC is considering a proposal to lower that to around 6 percent.

Investors are likely to respond by buying more speculative-grade bonds, said AAM strategist Wirtala. They will probably also buy more investment-grade bonds with ratings close to the top of the spectrum, which can be funded with less capital, he said. The higher-quality assets can offset the lower quality ones from a capital use standpoint, he said.

"This is really something we’re telling people to keep an eye on," Wirtala said.