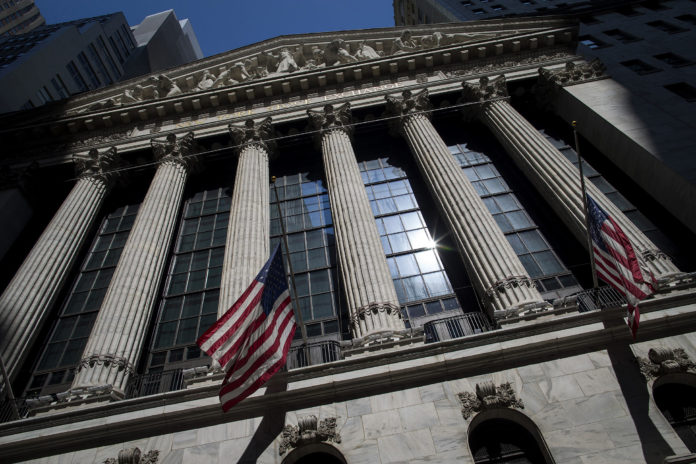 The steady march higher for U.S. stocks may have slowed to a crawl, but the S&P 500 Indexes sixth advance in seven weeks still managed to defy a chorus of bears warning valuations have become too rich.

The benchmark for American equity edged higher by 1.2 points to 2,184.05, two points shy of a record. Energy shares paced gains as crude notched its best week since April, while results from the largest department stores bolstered confidence in the retailing industry. Mixed economic data lowered the odds of an interest-rate hike this year, sending bank shares lower.

The rally in U.S. stocks amid a fifth consecutive quarter of declining earnings has inflated valuations to levels last seen in the dot-com era, a warning for some. For bulls, fresh evidence of the American economys steady expansion at a pace that isnt forcing the Federal Reserve to tighten can keep pushing equity prices higher.

The market continues to drift higher just above stall speed, Terry Morris, Wyomissing, Pennsylvania-based managing director of equities at BB&T Institutional Investment Advisors, said by phone. A lot of people who were scared out of equities earlier this year think they're missing the train and want back in, and valuations haven't necessarily deterred them. Investors aren't viewing the Fed as an immediate threat, with the economy growing just slow enough to keep them from raising right now.

The Dow Jones Industrial Average finished the week up 0.2 percent to 18,576.47, just under 40 points from an all-time high. The Nasdaq Composite Index edged higher to close at a record.

Persistent if slow gains have combined with falling earnings to swell valuations in the benchmark index. The S&P 500 is trading a 18.6 times future earnings, the highest since 2002. Although the second quarter has seen better-than-expected earnings growth, companies in the S&P 500 are still on pace for a fifth straight period of contraction, the longest streak since the start of the bull market.

The valuations do matter, but they aren't a short term indicator, said Joe Bell, a Cincinnati-based senior equity analyst at Schaeffers Investment Research Inc. This is a market that looks very strong and looks like it can continue to grow despite those high valuations. We aren't seeing a top in the market.

The U.S. stock markets grind to new highs and stretched valuations has come amid muted price swings. The S&P 500 has been stuck in a range of about 40 points since July 8, going 25 days without a move of more than 1 percent in either direction, the longest such streak since 2014.

That's kept the CBOE Volatility Index close to the lowest level in two years. The so-called equity fear gauge climbed 1.4 percent to 11.55 over the five days, snapping a six-week streak of declines. The measure still sits 33 percent below its five-year average.

The steadily rising, range-bound S&P 500 has been a drag on short positions that investors opened following the U.K.s vote in late June to exit the European Union. A Goldman Sachs Group Inc. basket of the markets 50 most-shorted stocks has surged 25 percent since the S&P 500 fell to a three-month low on June 27. Its advanced seven straight weeks in the longest rally since 2009.

Still, not all stock market signals have been reassuring for bulls. Corporate insiders slowed monthly buying of their own stock to the lowest ever in July, while retail investors have pulled $1.2 billion from the SPDR S&P 500 ETF over the past two weeks. Even Wall Street strategists, normally the markets most reliable cheerleaders, are calling for a drop by year-end for the first time since 2014.

A brighter message has been forming in corporate profits. With the earnings season about 90 percent done, about 78 percent of S&P 500 firms beat profit projections and 56 percent exceeded sales forecasts. Analysts have tempered their estimates for a decline in second-quarter net income to 2.5 percent, from 5.8 percent less than a month ago.