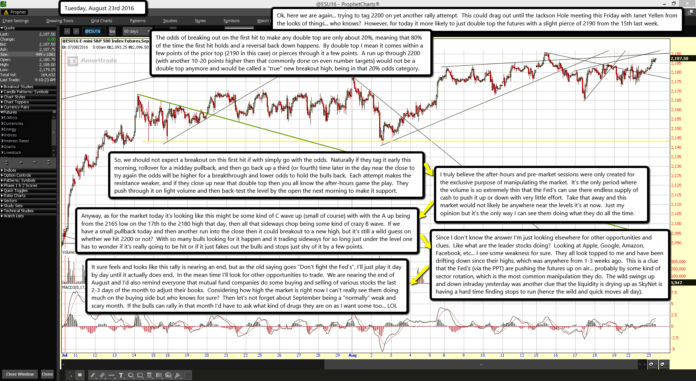 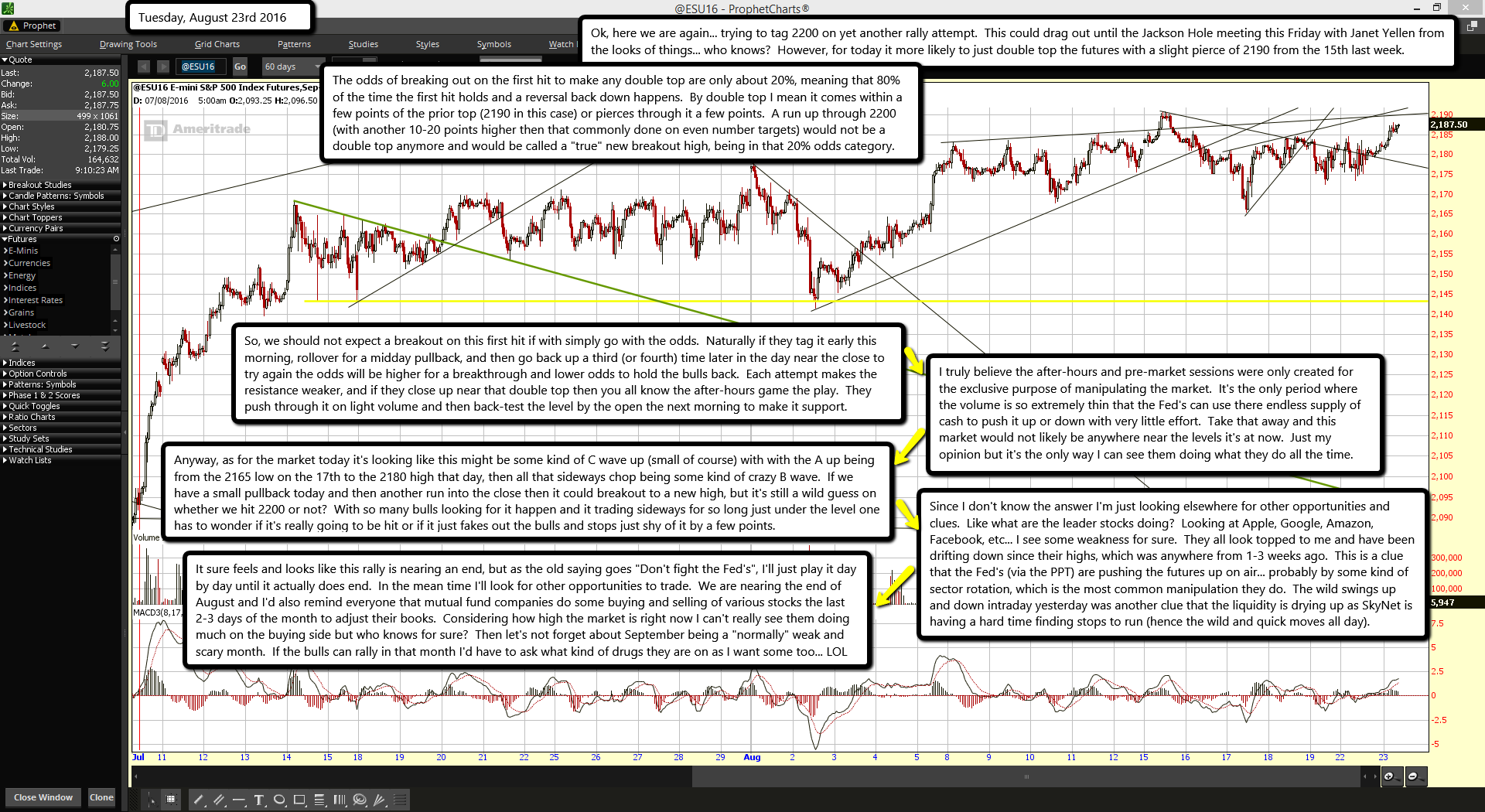 Ok, here we are again... trying to tag 2200 on yet another rally attempt.  This could drag out until the Jackson Hole meeting this Friday with Janet Yellen from the looks of things... who knows?  However, for today it more likely to just double top the futures with a slight pierce of 2190 from the 15th last week.

The odds of breaking out on the first hit to make any double top are only about 20%, meaning that 80% of the time the first hit holds and a reversal back down happens.  By double top I mean it comes within a few points of the prior top (2190 in this case) or pierces through it a few points.  A run up through 2200 (with another 10-20 points higher then that commonly done on even number targets) would not be a double top anymore and would be called a "true" new breakout high, being in that 20% odds category.

So, we should not expect a breakout on this first hit if with simply go with the odds.  Naturally if they tag it early this morning, rollover for a midday pullback, and then go back up a third (or fourth) time later in the day near the close to try again the odds will be higher for a breakthrough and lower odds to hold the bulls back.  Each attempt makes the resistance weaker, and if they close up near that double top then you all know the after-hours game the play.  They push through it on light volume and then back-test the level by the open the next morning to make it support.

I truly believe the after-hours and pre-market sessions were only created for the exclusive purpose of manipulating the market.  It's the only period where the volume is so extremely thin that the Fed's can use there endless supply of cash to push it up or down with very little effort.  Take that away and this market would not likely be anywhere near the levels it's at now.  Just my opinion but it's the only way I can see them doing what they do all the time.

Anyway, as for the market today it's looking like this might be some kind of C wave up (small of course) with with the A up being from the 2165 low on the 17th to the 2180 high that day, then all that sideways chop being some kind of crazy B wave.  If we have a small pullback today and then another run into the close then it could breakout to a new high, but it's still a wild guess on whether we hit 2200 or not?  With so many bulls looking for it happen and it trading sideways for so long just under the level one has to wonder if it's really going to be hit or if it just fakes out the bulls and stops just shy of it by a few points.

Since I don't know the answer I'm just looking elsewhere for other opportunities and clues.  Like what are the leader stocks doing?  Looking at Apple, Google, Amazon, Facebook, etc... I see some weakness for sure.  They all look topped to me and have been drifting down since their highs, which was anywhere from 1-3 weeks ago.  This is a clue that the Fed's (via the PPT) are pushing the futures up on air... probably by some kind of sector rotation, which is the most common manipulation they do.  The wild swings up and down intraday yesterday was another clue that the liquidity is drying up as SkyNet is having a hard time finding stops to run (hence the wild and quick moves all day).

It sure feels and looks like this rally is nearing an end, but as the old saying goes "Don't fight the Fed's", I'll just play it day by day until it actually does end.  In the mean time I'll look for other opportunities to trade.  We are nearing the end of August and I'd also remind everyone that mutual fund companies do some buying and selling of various stocks the last 2-3 days of the month to adjust their books.  Considering how high the market is right now I can't really see them doing much on the buying side but who knows for sure?  Then let's not forget about September being a "normally" weak and scary month.  If the bulls can rally in that month I'd have to ask what kind of drugs they are on as I want some too... LOL