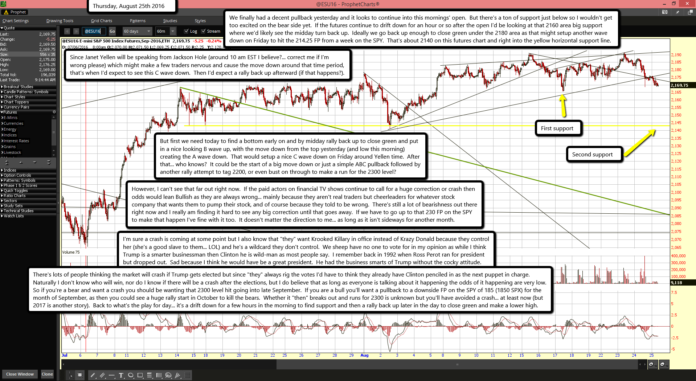 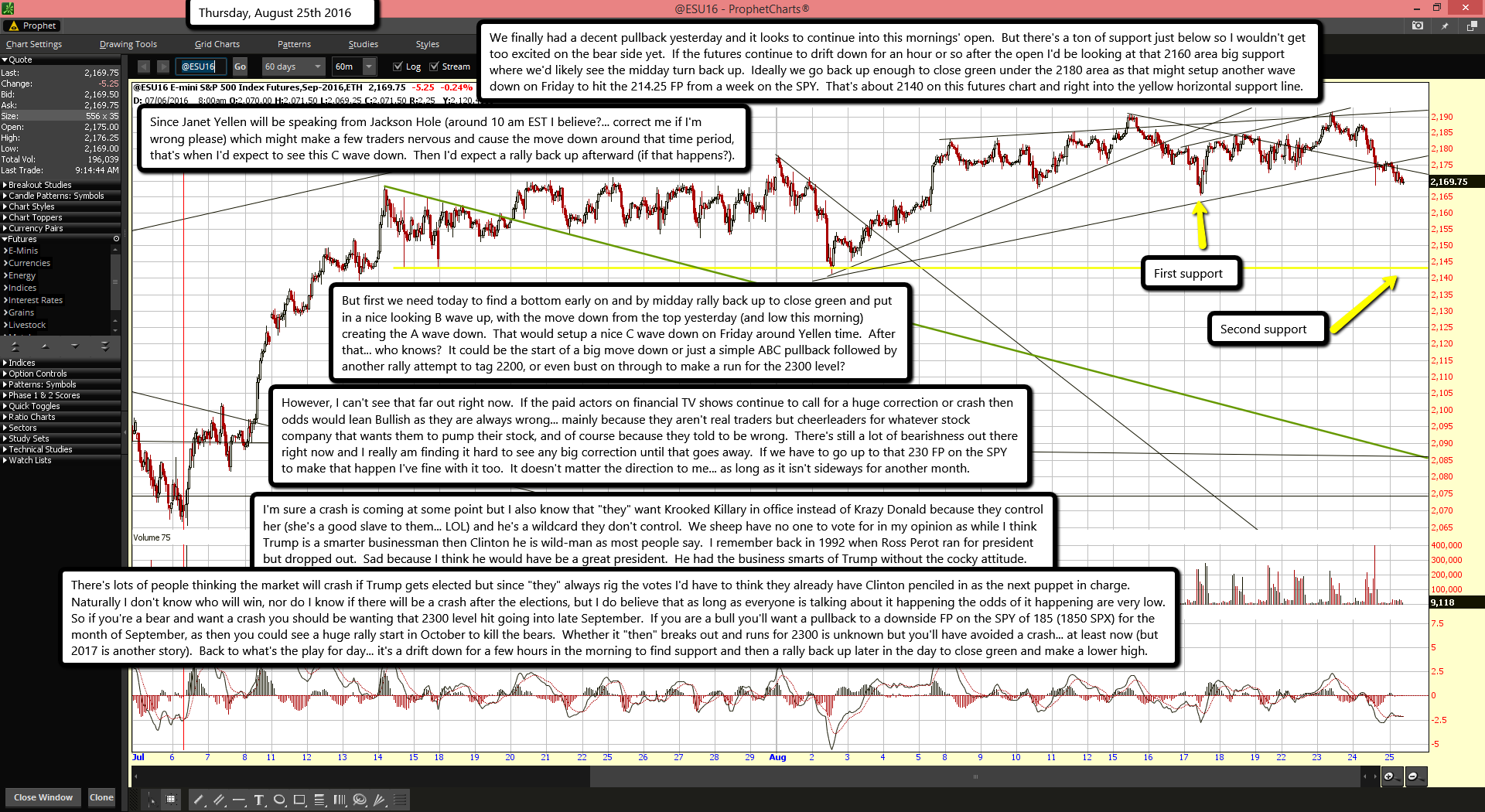 We finally had a decent pullback yesterday and it looks to continue into this mornings' open.  But there's a ton of support just below so I wouldn't get too excited on the bear side yet.  If the futures continue to drift down for an hour or so after the open I'd be looking at that 2160 area big support where we'd likely see the midday turn back up.  Ideally we go back up enough to close green under the 2180 area as that might setup another wave down on Friday to hit the 214.25 FP from a week on the SPY.  That's about 2140 on this futures chart and right into the yellow horizontal support line.

Since Janet Yellen will be speaking from Jackson Hole (around 10 am EST I believe?... correct me if I'm wrong please) which might make a few traders nervous and cause the move down around that time period, that's when I'd expect to see this C wave down.  Then I'd expect a rally back up afterward (if that happens?).

But first we need today to find a bottom early on and by midday rally back up to close green and put in a nice looking B wave up, with the move down from the top yesterday (and low this morning) creating the A wave down.  That would setup a nice C wave down on Friday around Yellen time.  After that... who knows?  It could be the start of a big move down or just a simple ABC pullback followed by another rally attempt to tag 2200, or even bust on through to make a run for the 2300 level?

However, I can't see that far out right now.  If the paid actors on financial TV shows continue to call for a huge correction or crash then odds would lean Bullish as they are always wrong... mainly because they aren't real traders but cheerleaders for whatever stock company that wants them to pump their stock, and of course because they told to be wrong.  There's still a lot of bearishness out there right now and I really am finding it hard to see any big correction until that goes away.  If we have to go up to that 230 FP on the SPY to make that happen I've fine with it too.  It doesn't matter the direction to me... as long as it isn't sideways for another month.

I'm sure a crash is coming at some point but I also know that "they" want Krooked Killary in office instead of Krazy Donald because they control her (she's a good slave to them... LOL) and he's a wildcard they don't control.  We sheep have no one to vote for in my opinion as while I think Trump is a smarter businessman then Clinton he is wild-man as most people say.  I remember back in 1992 when Ross Perot ran for president but dropped out.  Sad because I think he would have be a great president.  He had the business smarts of Trump without the cocky attitude.

There's lots of people thinking the market will crash if Trump gets elected but since "they" always rig the votes I'd have to think they already have Clinton penciled in as the next puppet in charge.  Naturally I don't know who will win, nor do I know if there will be a crash after the elections, but I do believe that as long as everyone is talking about it happening the odds of it happening are very low.  So if you're a bear and want a crash you should be wanting that 2300 level hit going into late September.  If you are a bull you'll want a pullback to a downside FP on the SPY of 185 (1850 SPX) for the month of September, as then you could see a huge rally start in October to kill the bears.  Whether it "then" breaks out and runs for 2300 is unknown but you'll have avoided a crash... at least now (but 2017 is another story).  Back to what's the play for day... it's a drift down for a few hours in the morning to find support and then a rally back up later in the day to close green and make a lower high.