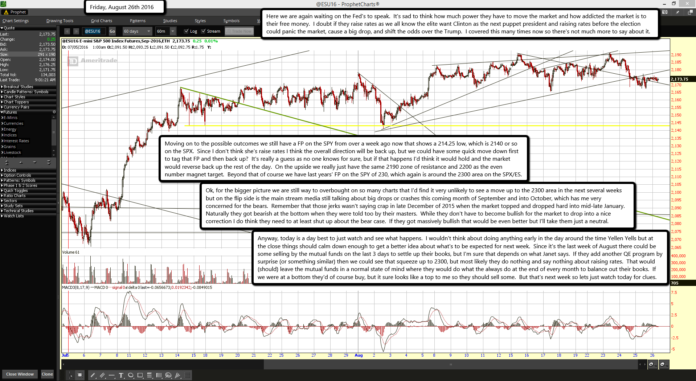 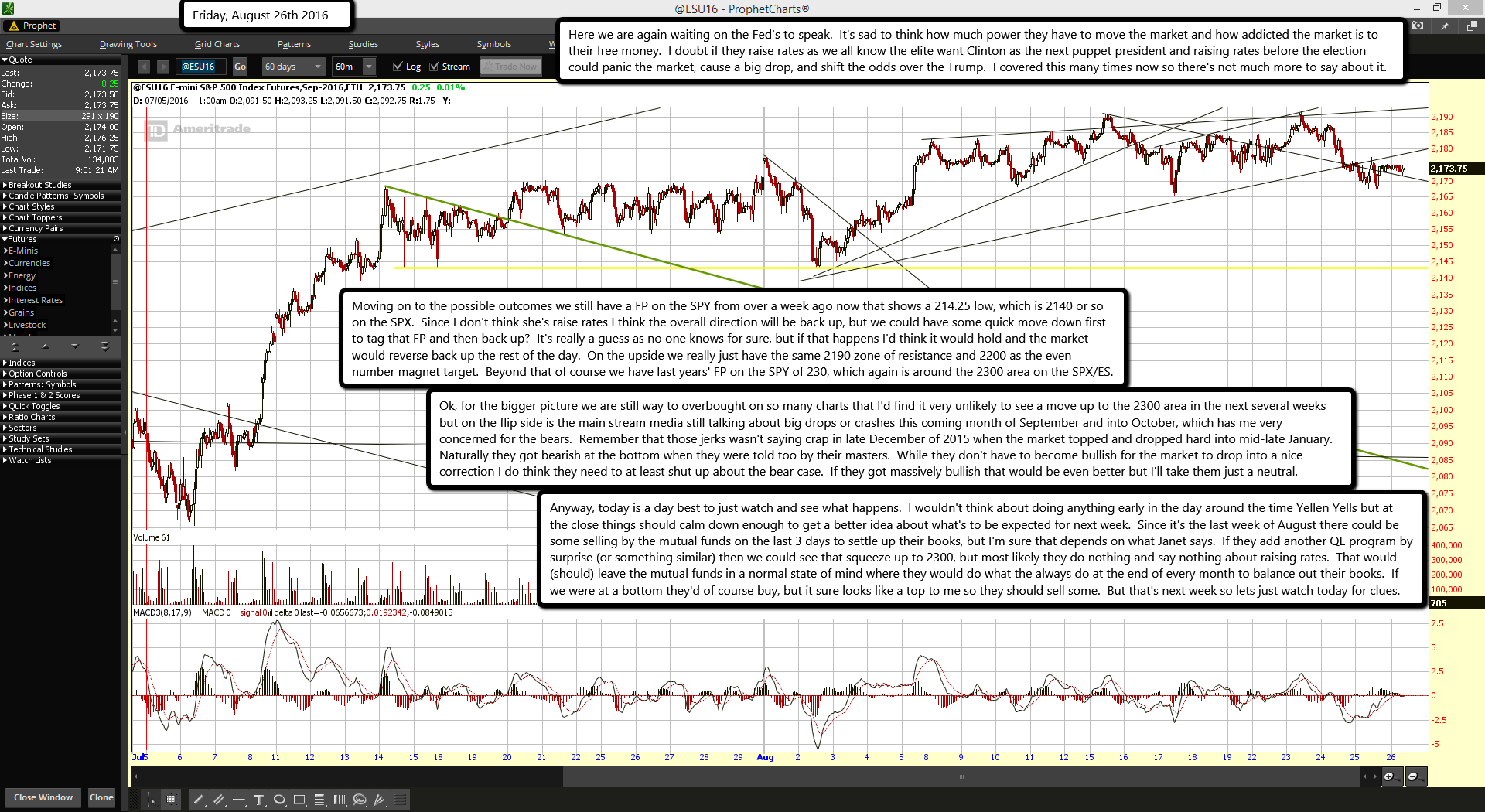 Here we are again waiting on the Fed's to speak. It's sad to think how much power they have to move the market and how addicted the market is to their free money. I doubt if they raise rates as we all know the elite want Clinton as the next puppet president and raising rates before the election could panic the market, cause a big drop, and shift the odds over the Trump. I covered this many times now so there's not much more to say about it.

Moving on to the possible outcomes we still have a FP on the SPY from over a week ago now that shows a 214.25 low, which is 2140 or so on the SPX. Since I don't think she's raise rates I think the overall direction will be back up, but we could have some quick move down first to tag that FP and then back up? It's really a guess as no one knows for sure, but if that happens I'd think it would hold and the market would reverse back up the rest of the day. On the upside we really just have the same 2190 zone of resistance and 2200 as the even number magnet target. Beyond that of course we have last years' FP on the SPY of 230, which again is around the 2300 area on the SPX/ES.

Ok, for the bigger picture we are still way to overbought on so many charts that I'd find it very unlikely to see a move up to the 2300 area in the next several weeks but on the flip side is the main stream media still talking about big drops or crashes this coming month of September and into October, which has me very concerned for the bears. Remember that those jerks wasn't saying crap in late December of 2015 when the market topped and dropped hard into mid-late January. Naturally they got bearish at the bottom when they were told too by their masters. While they don't have to become bullish for the market to drop into a nice correction I do think they need to at least shut up about the bear case. If they got massively bullish that would be even better but I'll take them just a neutral.

Anyway, today is a day best to just watch and see what happens. I wouldn't think about doing anything early in the day around the time Yellen Yells but at the close things should calm down enough to get a better idea about what's to be expected for next week. Since it's the last week of August there could be some selling by the mutual funds on the last 3 days to settle up their books, but I'm sure that depends on what Janet says. If they add another QE program by surprise (or something similar) then we could see that squeeze up to 2300, but most likely they do nothing and say nothing about raising rates. That would (should) leave the mutual funds in a normal state of mind where they would do what the always do at the end of every month to balance out their books. If we were at a bottom they'd of course buy, but it sure looks like a top to me so they should sell some. But that's next week so lets just watch today for clues.