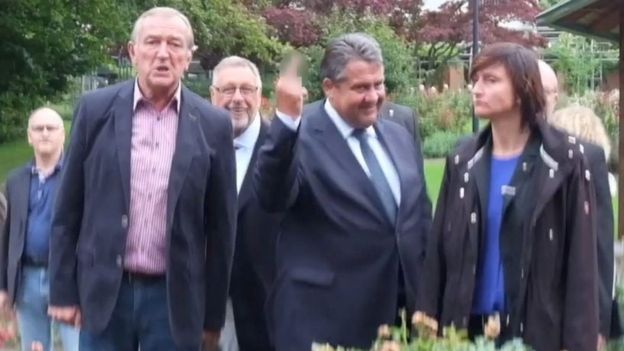 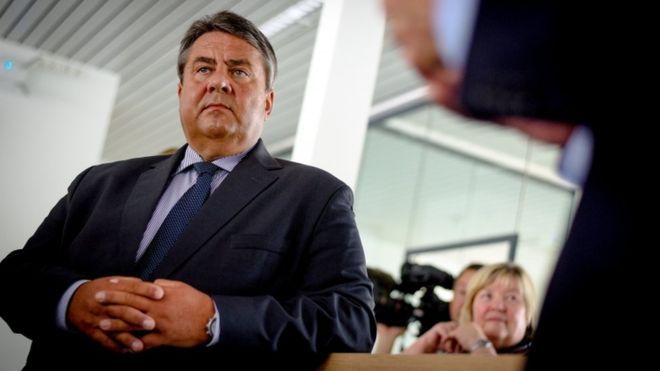 Germany's vice-chancellor has warned the future of the EU could be in doubt if the UK's exit is handled badly.

Sigmar Gabriel said the EU would go "down the drain" if other states followed Britain's lead and that the UK could not keep the "nice things" about Europe while taking no responsibility.

It comes as Theresa May summoned ministers for a meeting on Wednesday to discuss ideas for the UK's withdrawal.

But a report in The Sunday Times suggested her cabinet was split over leaving the single market.

The UK voted to leave the European Union in a referendum vote on 23 June.

Mr Gabriel, who is also economy minister in Germany's governing coalition and Chancellor Angela Merkel's deputy, told a news conference that as a result, the world now regarded Europe as an unstable continent.
'Deep trouble'

"Brexit is bad but it won't hurt us as much economically as some fear - it's more of a psychological problem and it's a huge problem politically," he said.

"If we organise Brexit in the wrong way, then we'll be in deep trouble, so now we need to make sure that we don't allow Britain to keep the nice things, so to speak, related to Europe while taking no responsibility."

Mrs Merkel has met a number of European leaders during the past week to prepare the ground for a September summit focused on the EU's future post-Brexit.

She has said remaining member states must listen to each other carefully and avoid rushing into policy decisions.

Meanwhile, Mrs May is due to begin drawing up blueprints for Brexit on Wednesday, when she hosts cabinet ministers at Chequers, the prime minister's country retreat in Buckinghamshire.

BBC political correspondent Chris Mason said Mrs May would hear different answers to the question "what does Brexit actually mean?" from around the cabinet table and in Parliament.
Trade talks

It comes as a new cross-party group called Open Britain was launched.

In a joint article for the group in the Sunday Times, three former ministers from the Conservatives, Labour and the Liberal Democrats accept that the free movement of people cannot continue, but they warn against "pulling up the drawbridge."

Mr Gabriel also said on Sunday that trade talks between the EU and the US had "de facto failed".

The plan - known as the Transatlantic Trade and Investment Partnership or TTIP - aimed to remove or reduce a wide range of barriers to EU-US trade and investment.

However, the move has been controversial in many of countries involved, including Germany and the UK. Critics say TTIP is driven by big business and would be bad for jobs, consumers and the environment.

In 14 rounds of talks, the two sides had not agreed on a single common chapter out of 27 being discussed, Mr Gabriel said.

"In my opinion the negotiations with the United States have de facto failed, even though nobody is really admitting it," said Mr Gabriel.
'Don't submit'

He suggested Washington was angry about a deal the EU struck with Canada, because it contained elements the US does not want to see in the TTIP.

"We mustn't submit to the American proposals," said Mr Gabriel, who is head of Germany's centre-left Social Democratic Party, which is in coalition with Mrs Merkel's centre-right Christian Democratic Union.

The BBC's Andrew Walker said ending the negotiations would not be a decision for Mr Gabriel, as he is the leader of centre-left Social Democratic Party, which is in coalition with Mrs Merkel's centre-right Christian Democratic Union.

Nonetheless, Mr Gabriel is an important voice and his view that TTIP has in effect failed is a sign of just how much political difficulty it faces, our correspondent added.

He has also been forced to defend his actions after he flicked the middle finger to a group of right-wing protesters earlier this month.

Sigmar Gabriel said his only mistake was not using both hands, and told his critics to think about what they would do if faced with 12 "young, aggressive, swearing and ready-for-violence Nazis".

Mr Gabriel had been confronted by the hecklers in northern Germany.