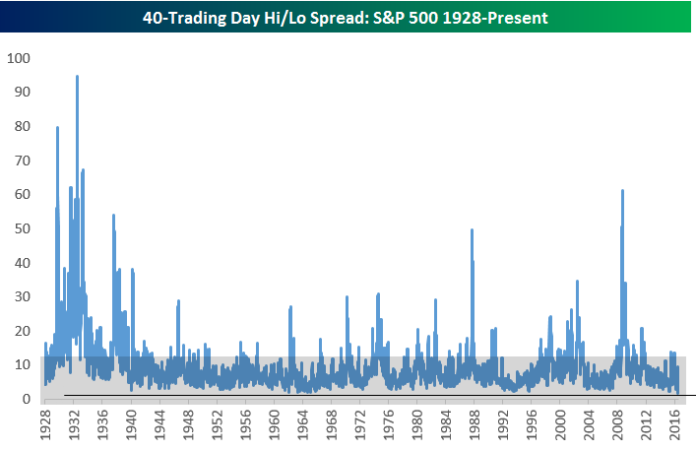 Over the 40 days through Wednesday, the S&P 500's highest and lowest closes have been just 1.75 percent apart. It's the first time that has ever happened in the history of S&P data, which goes back to 1928, according to Paul Hickey, co-founder of Bespoke Investment Group.

"It's been one of the deadest summers ever, and that's what the numbers are showing," Hickey said Thursday on CNBC's "Trading Nation." 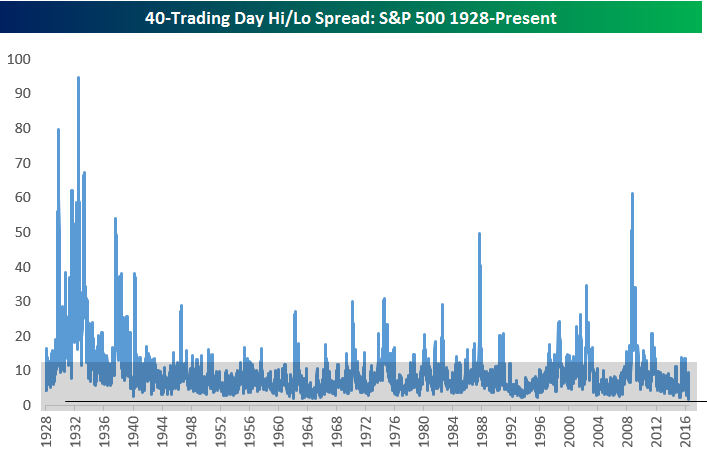 The summer didn't start out dull, what will the United Kingdom's shocking vote in June to leave the European Union. This led to a profound market dip, followed by a comeback that was just as profound, before a more recent period of intense quiescence began.

While some have seen the market's quiet as a source of concern, history appears to show something different.

"A lack of volatility in the market is usually accompanied by positive returns," he said. "One of the periods that was closest to this narrow [in terms of the market range] was in the mid-1960s; the market did very well in the '60s, and that was a good period of calm."

Of course, since stocks tend to drop faster than they rise, this may not properly state the causation. It may simply be that positively trending markets tend to be quiet ones.

Either way, Hickey warns that "eventually that period of calm will end, and it will be followed by a short-term sell-off than a spike higher," simply because that is what has always happened in the past.

"But it is what it is, and it's nice to enjoy it while it lasts."