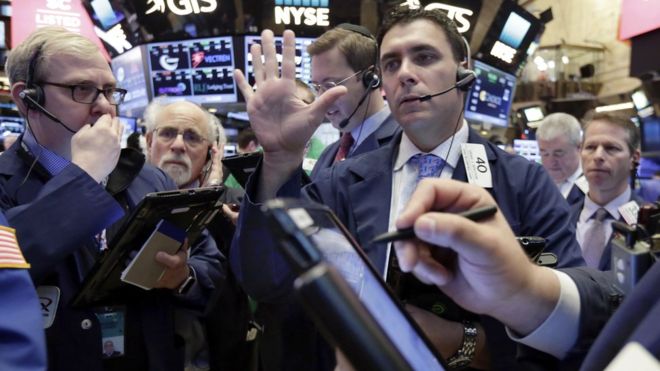 The US Dow Jones stock index has closed at a record high for the 12th day running as Donald Trump promised a "big" infrastructure announcement.

It is the longest winning streak for the share index since January 1987.

Analysts said Wall Street was buoyed by hopes the US president would set out more on his spending and tax plans in a speech to Congress on Tuesday.

Ahead of the speech, Mr Trump said: "We're going to make it easier for states to invest in infrastructure and I'm going to have a big statement tomorrow night on infrastructure."

As well as significantly raising infrastructure spending, Mr Trump has previously pledged to cut taxes for US businesses.

"For the moment, whenever he speaks of those upcoming plans, we get a leg up in the market," Peter Jankovskis, director of research at Oakbrook Investments, told BBC World Service.

"Whenever he's not talking, there's enough momentum to keep it moving forward."

The Dow closed at record highs for 13 sessions in a row in January 1987, nine months before the Black Monday market crash.

Certainly interesting about 1987 but I don't expect a crash this year.  To me I think the really bad year is going to be 2019, but that doesn't rule out some surprise moves down this year.