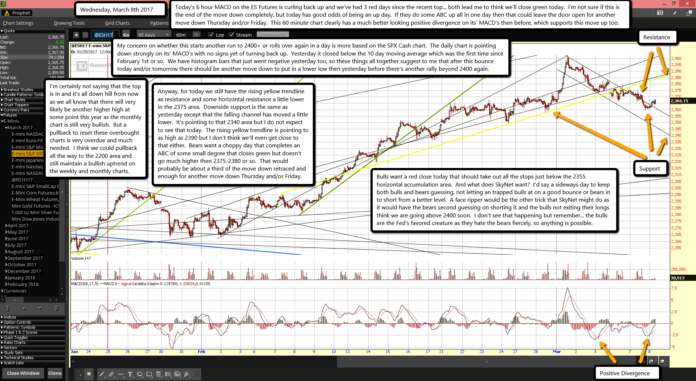 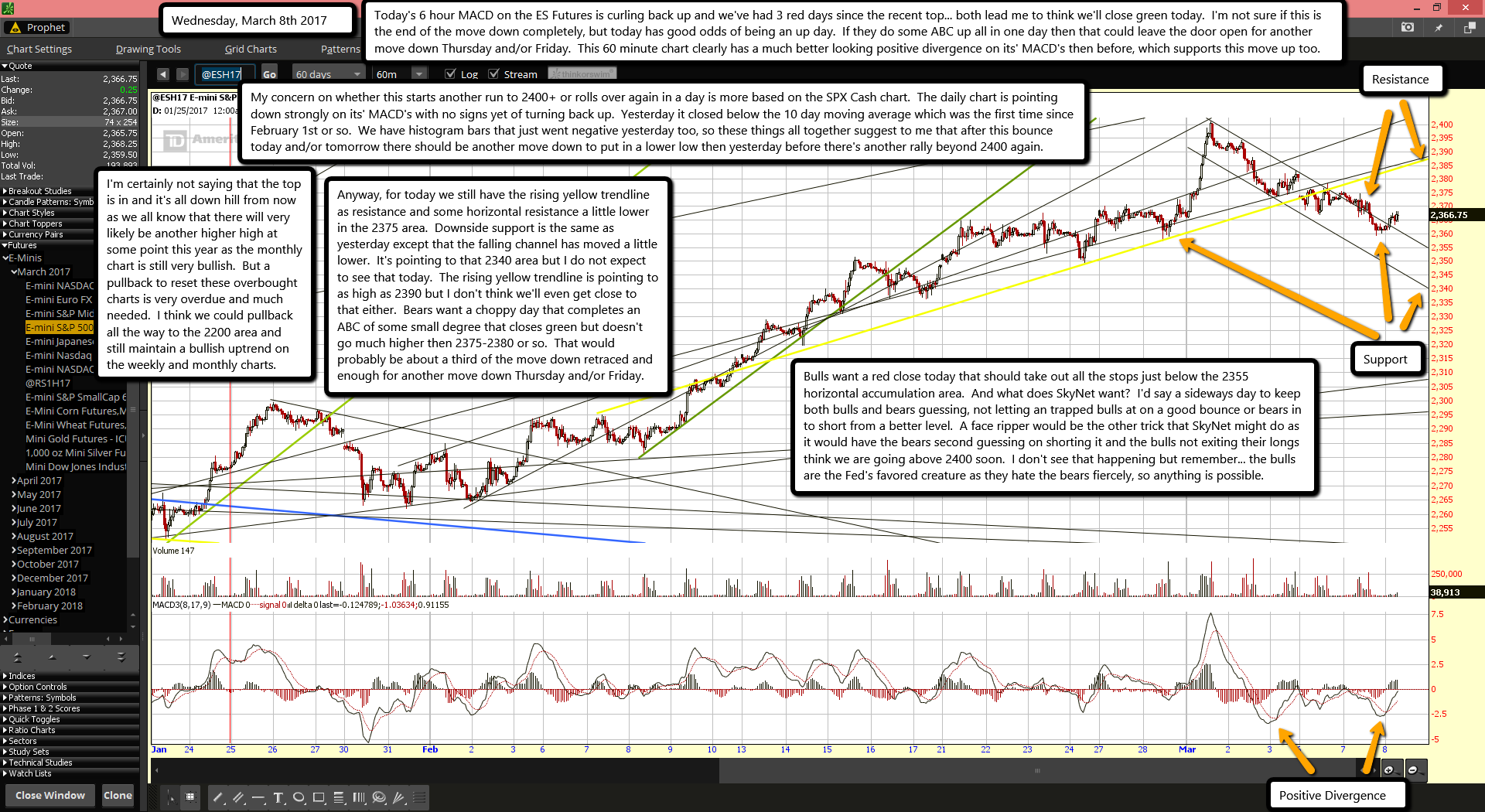 Today's 6 hour MACD on the ES Futures is curling back up and we've had 3 red days since the recent top... both lead me to think we'll close green today.  I'm not sure if this is the end of the move down completely, but today has good odds of being an up day.  If they do some ABC up all in one day then that could leave the door open for another move down Thursday and/or Friday.  This 60 minute chart clearly has a much better looking positive divergence on its' MACD's then before, which supports this move up too.

My concern on whether this starts another run to 2400+ or rolls over again in a day is more based on the SPX Cash chart.  The daily chart is pointing down strongly on its' MACD's with no signs yet of turning back up.  Yesterday it closed below the 10 day moving average which was the first time since February 1st or so.  We have histogram bars that just went negative yesterday too, so these things all together suggest to me that after this bounce today and/or tomorrow there should be another move down to put in a lower low then yesterday before there's another rally beyond 2400 again.

I'm certainly not saying that the top is in and it's all down hill from now as we all know that there will very likely be another higher high at some point this year as the monthly chart is still very bullish.  But a pullback to reset these overbought charts is very overdue and much needed.  I think we could pullback all the way to the 2200 area and still maintain a bullish uptrend on the weekly and monthly charts.

Anyway, for today we still have the rising yellow trendline as resistance and some horizontal resistance a little lower in the 2375 area.  Downside support is the same as yesterday except that the falling channel has moved a little lower.  It's pointing to that 2340 area but I do not expect to see that today.  The rising yellow trendline is pointing to as high as 2390 but I don't think we'll even get close to that either.  Bears want a choppy day that completes an ABC of some small degree that closes green but doesn't go much higher then 2375-2380 or so.  That would probably be about a third of the move down retraced and enough for another move down Thursday and/or Friday.

Bulls want a red close today that should take out all the stops just below the 2355 horizontal accumulation area.  And what does SkyNet want?  I'd say a sideways day to keep both bulls and bears guessing, not letting an trapped bulls at on a good bounce or bears in to short from a better level.  A face ripper would be the other trick that SkyNet might do as it would have the bears second guessing on shorting it and the bulls not exiting their longs think we are going above 2400 soon.  I don't see that happening but remember... the bulls are the Fed's favored creature as they hate the bears fiercely, so anything is possible.