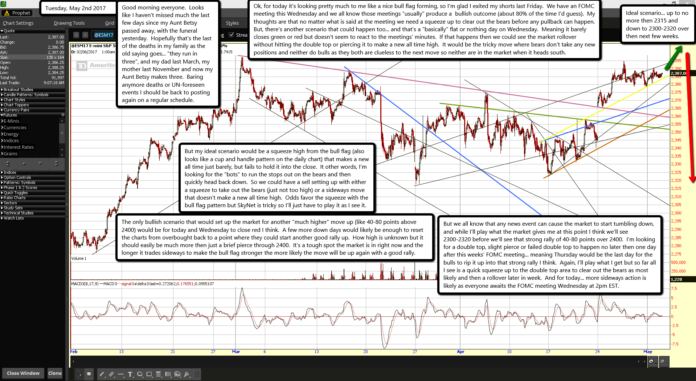 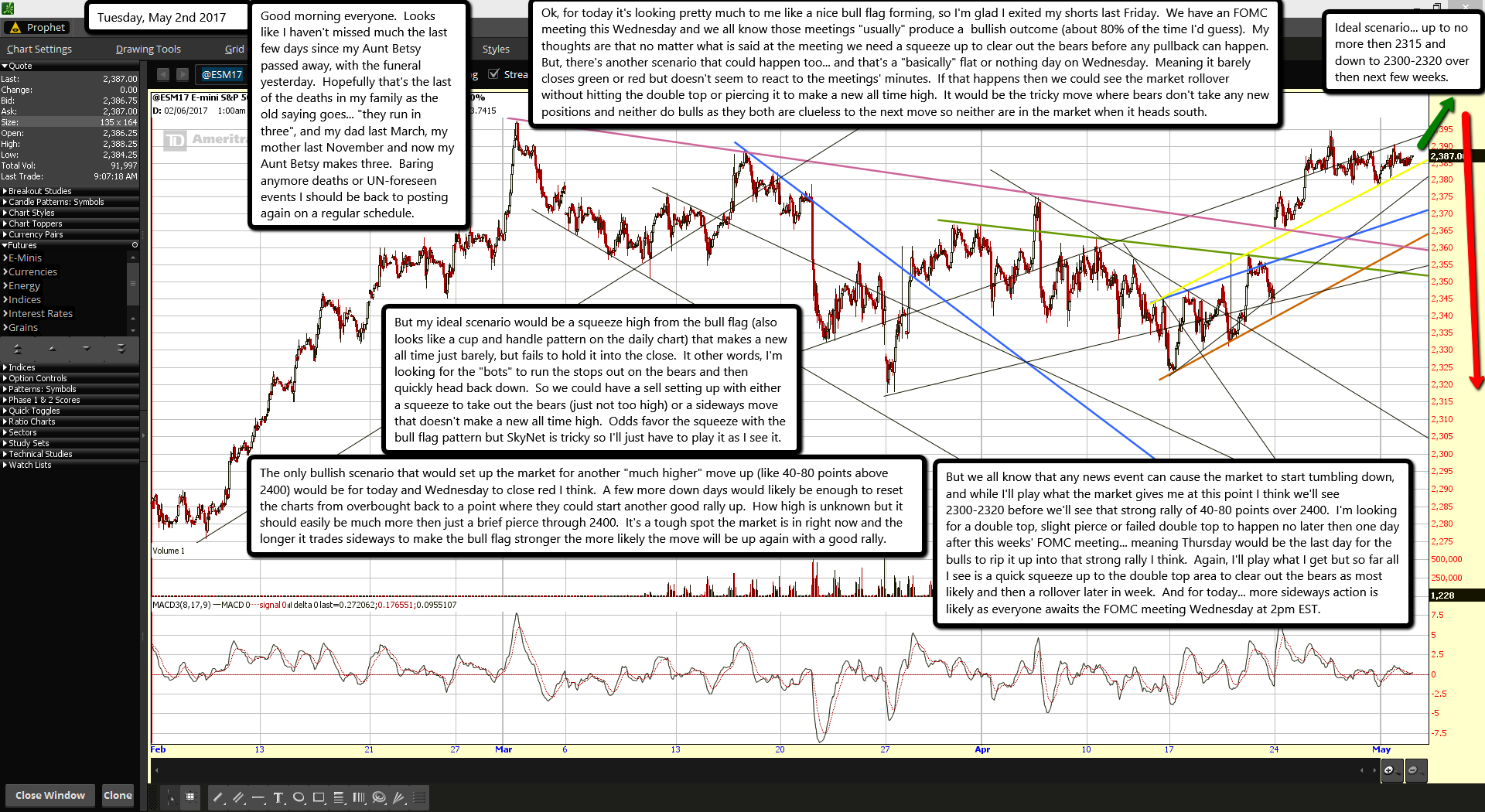 Good morning everyone.  Looks like I haven't missed much the last few days since my Aunt Betsy passed away, with the funeral yesterday.  Hopefully that's the last of the deaths in my family as the old saying goes... "they run in three", and my dad last March, my mother last November and now my Aunt Betsy makes three.  Baring anymore deaths or UN-foreseen events I should be back to posting again on a regular schedule.

Ok, for today it's looking pretty much to me like a nice bull flag forming, so I'm glad I exited my shorts last Friday.  We have an FOMC meeting this Wednesday and we all know those meetings "usually" produce a  bullish outcome (about 80% of the time I'd guess).  My thoughts are that no matter what is said at the meeting we need a squeeze up to clear out the bears before any pullback can happen.  But, there's another scenario that could happen too... and that's a "basically" flat or nothing day on Wednesday.  Meaning it barely closes green or red but doesn't seem to react to the meetings' minutes.  If that happens then we could see the market rollover without hitting the double top or piercing it to make a new all time high.  It would be the tricky move where bears don't take any new positions and neither do bulls as they both are clueless to the next move so neither are in the market when it heads south.

But my ideal scenario would be a squeeze high from the bull flag (also looks like a cup and handle pattern on the daily chart) that makes a new all time just barely, but fails to hold it into the close.  It other words, I'm looking for the "bots" to run the stops out on the bears and then quickly head back down.  So we could have a sell setting up with either a squeeze to take out the bears (just not too high) or a sideways move that doesn't make a new all time high.  Odds favor the squeeze with the bull flag pattern but SkyNet is tricky so I'll just have to play it as I see it.

The only bullish scenario that would set up the market for another "much higher" move up (like 40-80 points above 2400) would be for today and Wednesday to close red I think.  A few more down days would likely be enough to reset the charts from overbought back to a point where they could start another good rally up.  How high is unknown but it should easily be much more then just a brief pierce through 2400.  It's a tough spot the market is in right now and the longer it trades sideways to make the bull flag stronger the more likely the move will be up again with a good rally.

But we all know that any news event can cause the market to start tumbling down, and while I'll play what the market gives me at this point I think we'll see 2300-2320 before we'll see that strong rally of 40-80 points over 2400.  I'm looking for a double top, slight pierce or failed double top to happen no later then one day after this weeks' FOMC meeting... meaning Thursday would be the last day for the bulls to rip it up into that strong rally I think.  Again, I'll play what I get but so far all I see is a quick squeeze up to the double top area to clear out the bears as most likely and then a rollover later in week.  And for today... more sideways action is likely as everyone awaits the FOMC meeting Wednesday at 2pm EST.