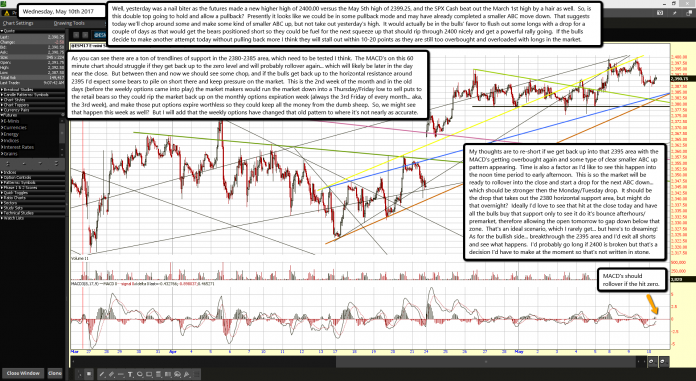 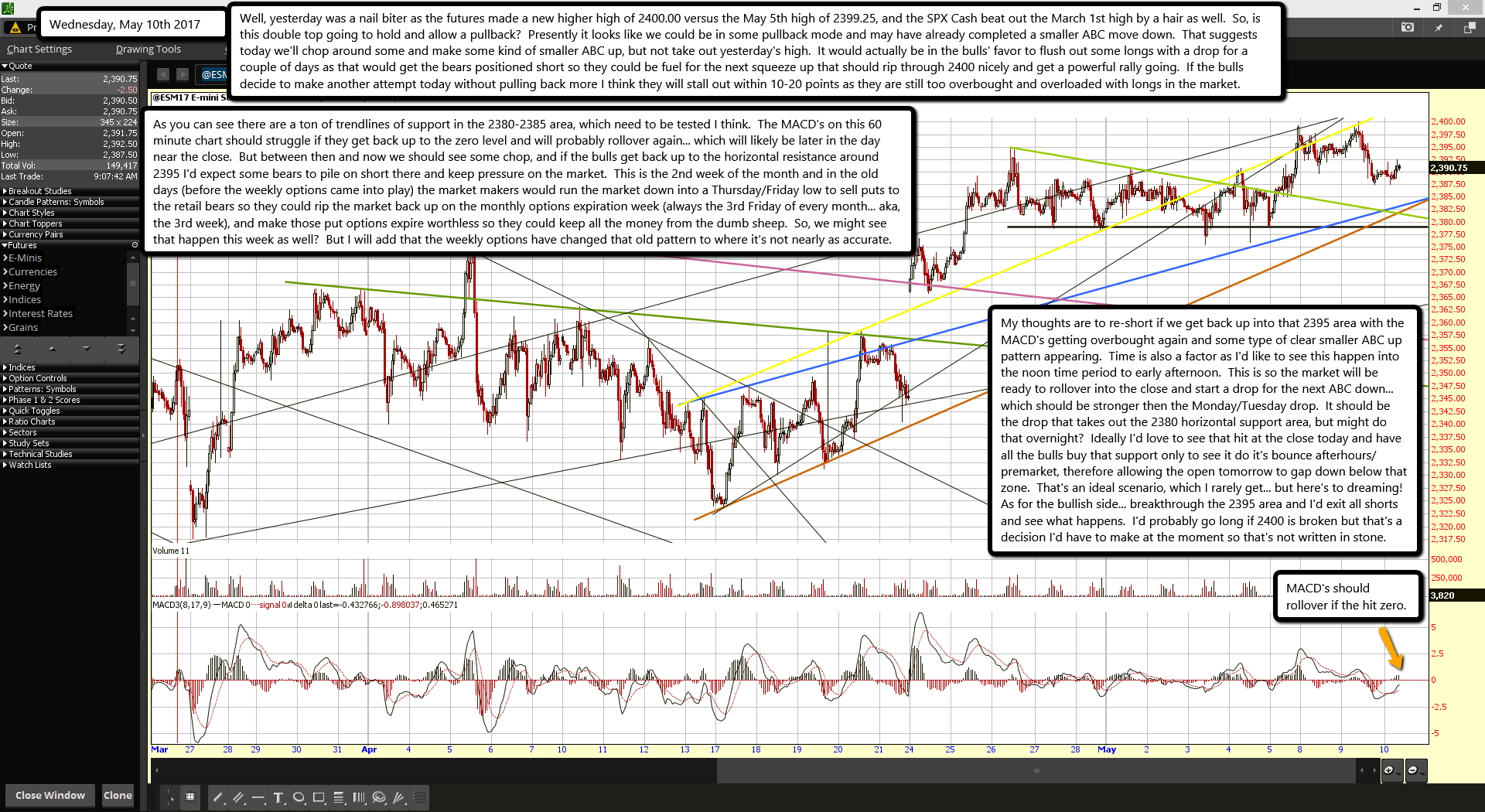 Well, yesterday was a nail biter as the futures made a new higher high of 2400.00 versus the May 5th high of 2399.25, and the SPX Cash beat out the March 1st high by a hair as well.  So, is this double top going to hold and allow a pullback?  Presently it looks like we could be in some pullback mode and may have already completed a smaller ABC move down.  That suggests today we'll chop around some and make some kind of smaller ABC up, but not take out yesterday's high.  It would actually be in the bulls' favor to flush out some longs with a drop for a couple of days as that would get the bears positioned short so they could be fuel for the next squeeze up that should rip through 2400 nicely and get a powerful rally going.  If the bulls decide to make another attempt today without pulling back more I think they will stall out within 10-20 points as they are still too overbought and overloaded with longs in the market.

As you can see there are a ton of trendlines of support in the 2380-2385 area, which need to be tested I think.  The MACD's on this 60 minute chart should struggle if they get back up to the zero level and will probably rollover again... which will likely be later in the day near the close.  But between then and now we should see some chop, and if the bulls get back up to the horizontal resistance around 2395 I'd expect some bears to pile on short there and keep pressure on the market.  This is the 2nd week of the month and in the old days (before the weekly options came into play) the market makers would run the market down into a Thursday/Friday low to sell puts to the retail bears so they could rip the market back up on the monthly options expiration week (always the 3rd Friday of every month... aka, the 3rd week), and make those put options expire worthless so they could keep all the money from the dumb sheep.  So, we might see that happen this week as well?  But I will add that the weekly options have changed that old pattern to where it's not nearly as accurate.

My thoughts are to re-short if we get back up into that 2395 area with the MACD's getting overbought again and some type of clear smaller ABC up pattern appearing.  Time is also a factor as I'd like to see this happen into the noon time period to early afternoon.  This is so the market will be ready to rollover into the close and start a drop for the next ABC down... which should be stronger then the Monday/Tuesday drop.  It should be the drop that takes out the 2380 horizontal support area, but might do that overnight?  Ideally I'd love to see that hit at the close today and have all the bulls buy that support only to see it do it's bounce afterhours/premarket, therefore allowing the open tomorrow to gap down below that zone.  That's an ideal scenario, which I rarely get... but here's to dreaming!  As for the bullish side... breakthrough the 2395 area and I'd exit all shorts and see what happens.  I'd probably go long if 2400 is broken but that's a decision I'd have to make at the moment so that's not written in stone.