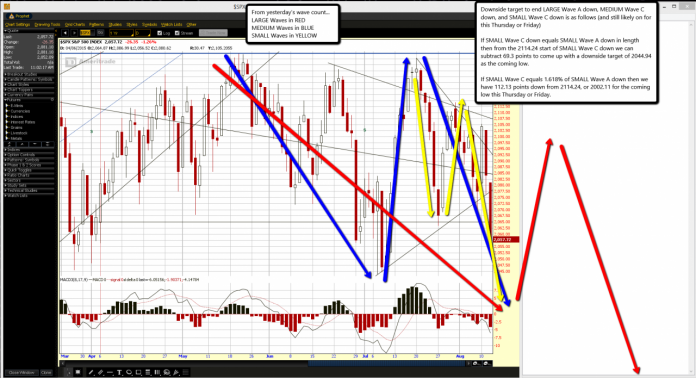 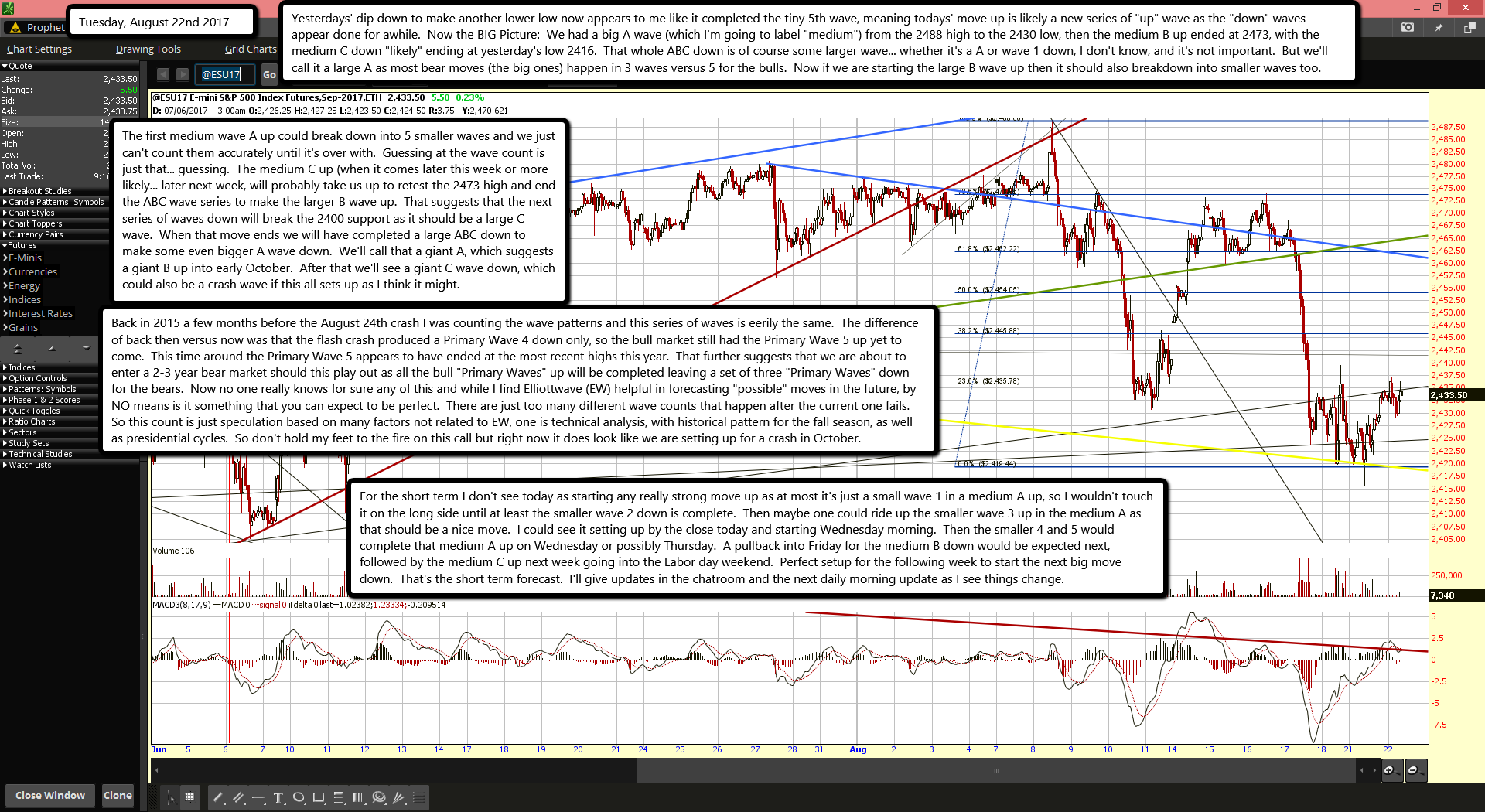 Yesterdays' dip down to make another lower low now appears to me like it completed the tiny 5th wave, meaning todays' move up is likely a new series of "up" wave as the "down" waves appear done for awhile.  Now the BIG Picture:  We had a big A wave (which I'm going to label "medium") from the 2488 high to the 2430 low, then the medium B up ended at 2473, with the medium C down "likely" ending at yesterday's low 2416.  That whole ABC down is of course some larger wave... whether it's a A or wave 1 down, I don't know, and it's not important.  But we'll call it a large A as most bear moves (the big ones) happen in 3 waves versus 5 for the bulls.  Now if we are starting the large B wave up then it should also breakdown into smaller waves too.

The first medium wave A up could break down into 5 smaller waves and we just can't count them accurately until it's over with.  Guessing at the wave count is just that... guessing.  The medium C up (when it comes later this week or more likely... later next week, will probably take us up to retest the 2473 high and end the ABC wave series to make the larger B wave up.  That suggests that the next series of waves down will break the 2400 support as it should be a large C wave.  When that move ends we will have completed a large ABC down to make some even bigger A wave down.  We'll call that a giant A, which suggests a giant B up into early October.  After that we'll see a giant C wave down, which could also be a crash wave if this all sets up as I think it might.

Back in 2015 a few months before the August 24th crash I was counting the wave patterns and this series of waves is eerily the same.  The difference of back then versus now was that the flash crash produced a Primary Wave 4 down only, so the bull market still had the Primary Wave 5 up yet to come.  This time around the Primary Wave 5 appears to have ended at the most recent highs this year.  That further suggests that we are about to enter a 2-3 year bear market should this play out as all the bull "Primary Waves" up will be completed leaving a set of three "Primary Waves" down for the bears.  Now no one really knows for sure any of this and while I find Elliottwave (EW) helpful in forecasting "possible" moves in the future, by NO means is it something that you can expect to be perfect.  There are just too many different wave counts that happen after the current one fails.  So this count is just speculation based on many factors not related to EW, one is technical analysis, with historical pattern for the fall season, as well as presidential cycles.  So don't hold my feet to the fire on this call but right now it does look like we are setting up for a crash in October.

For the short term I don't see today as starting any really strong move up as at most it's just a small wave 1 in a medium A up, so I wouldn't touch it on the long side until at least the smaller wave 2 down is complete.  Then maybe one could ride up the smaller wave 3 up in the medium A as that should be a nice move.  I could see it setting up by the close today and starting Wednesday morning.  Then the smaller 4 and 5 would complete that medium A up on Wednesday or possibly Thursday.  A pullback into Friday for the medium B down would be expected next, followed by the medium C up next week going into the Labor day weekend.  Perfect setup for the following week to start the next big move down.  That's the short term forecast.  I'll give updates in the chatroom and the next daily morning update as I see things change.

PS:  Here's the image of the wave count I did right before the August 24th, 2015 flash crash 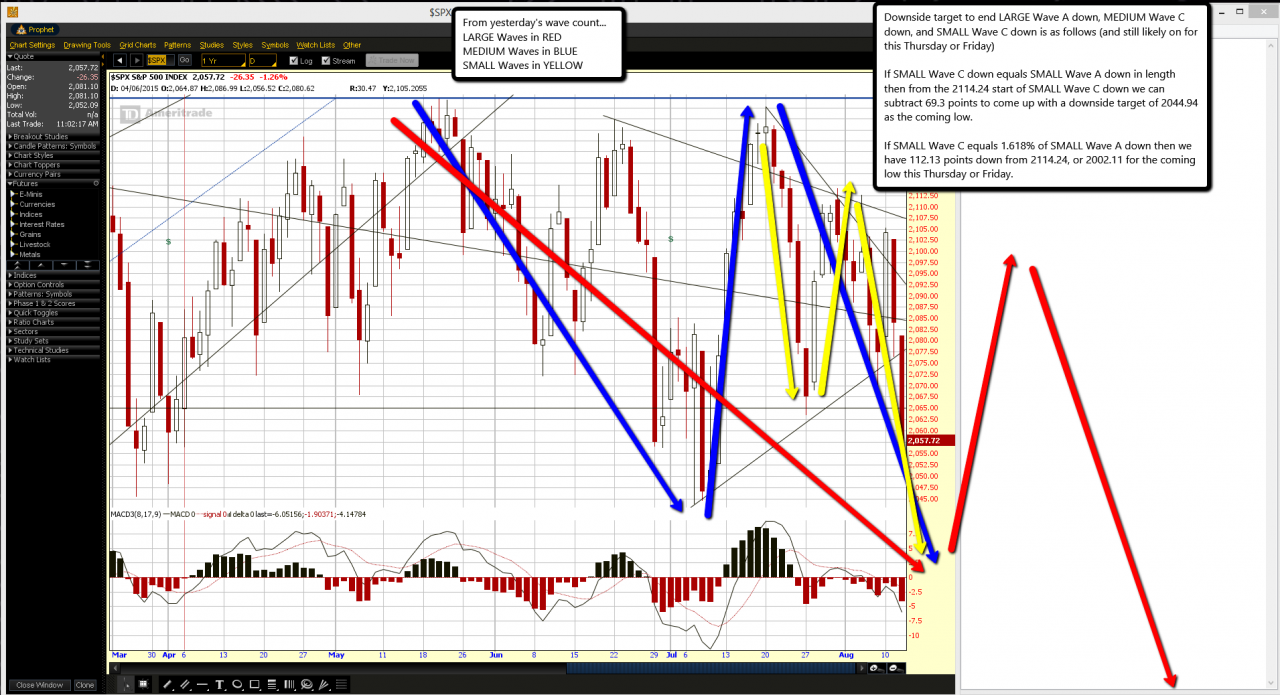 You'll notice that I only forecasted a move down to about 2002.11 for the C wave (aka, the "crash" wave), which was obviously too conservative as the actually low that followed was 1867 SPX.

Back then I also had "passport codes" pointing to August 24th, 2015... which I only talk about now in the chatroom.  And yes, I have another code for this October.