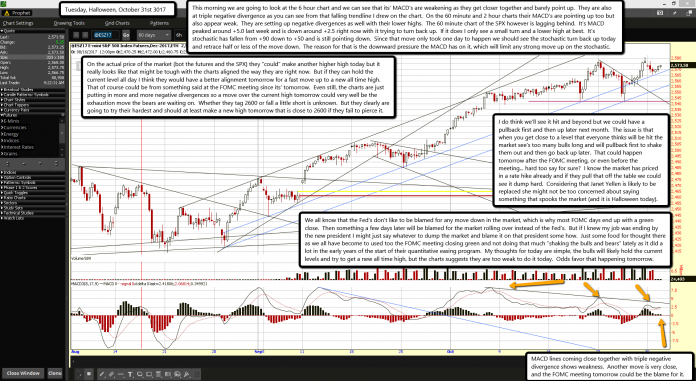 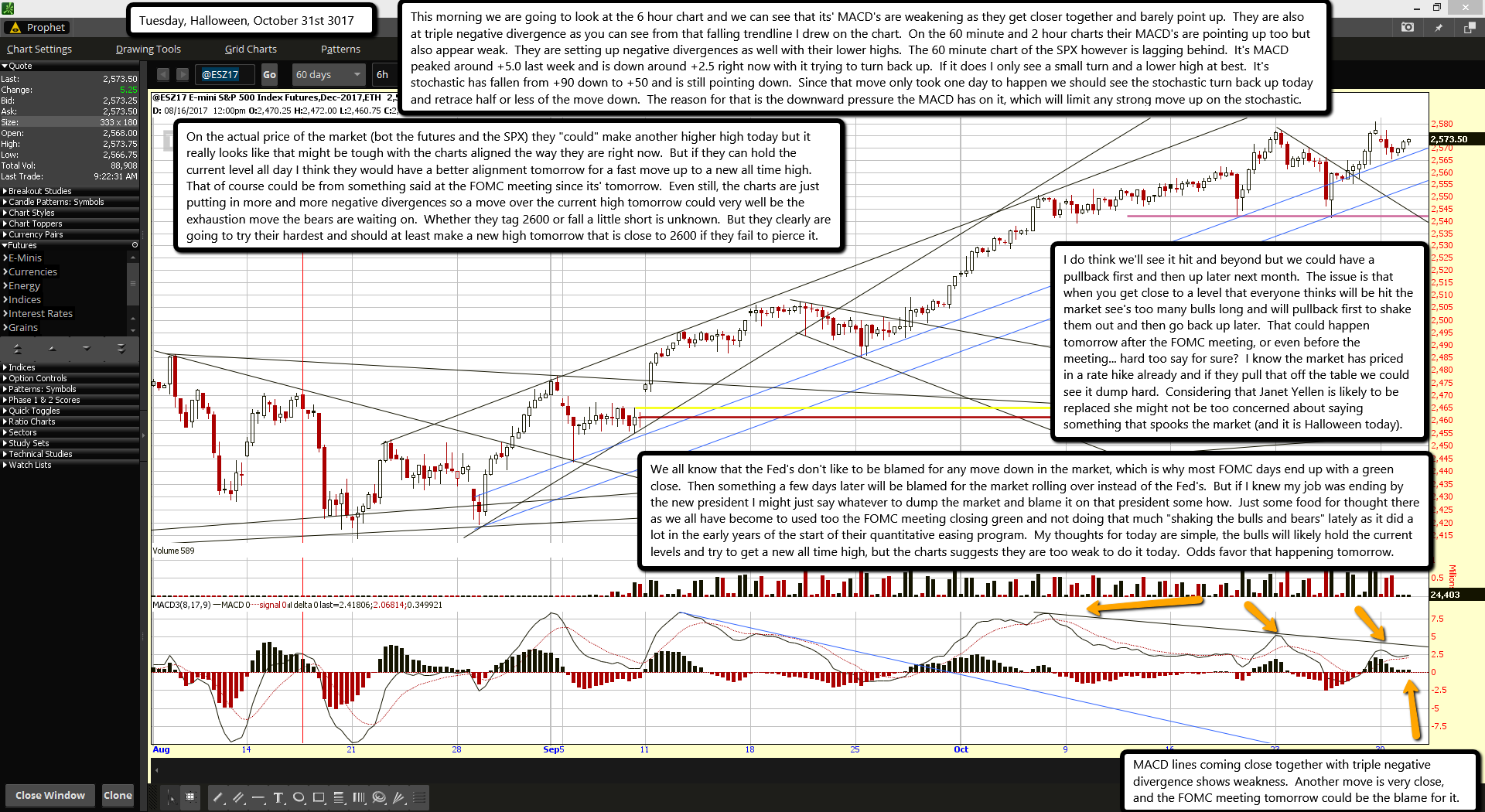 This morning we are going to look at the 6 hour chart and we can see that its' MACD's are weakening as they get closer together and barely point up.  They are also at triple negative divergence as you can see from that falling trendline I drew on the chart.  On the 60 minute and 2 hour charts their MACD's are pointing up too but also appear weak.  They are setting up negative divergences as well with their lower highs.  The 60 minute chart of the SPX however is lagging behind.  It's MACD peaked around +5.0 last week and is down around +2.5 right now with it trying to turn back up.  If it does I only see a small turn and a lower high at best.  It's stochastic has fallen from +90 down to +50 and is still pointing down.  Since that move only took one day to happen we should see the stochastic turn back up today and retrace half or less of the move down.  The reason for that is the downward pressure the MACD has on it, which will limit any strong move up on the stochastic.

On the actual price of the market (bot the futures and the SPX) they "could" make another higher high today but it really looks like that might be tough with the charts aligned the way they are right now.  But if they can hold the current level all day I think they would have a better alignment tomorrow for a fast move up to a new all time high.  That of course could be from something said at the FOMC meeting since its' tomorrow.  Even still, the charts are just putting in more and more negative divergences so a move over the current high tomorrow could very well be the exhaustion move the bears are waiting on.  Whether they tag 2600 or fall a little short is unknown.  But they clearly are going to try their hardest and should at least make a new high tomorrow that is close to 2600 if they fail to pierce it.

I do think we'll see it hit and beyond but we could have a pullback first and then up later next month.  The issue is that when you get close to a level that everyone thinks will be hit the market see's too many bulls long and will pullback first to shake them out and then go back up later.  That could happen tomorrow after the FOMC meeting, or even before the meeting... hard too say for sure?  I know the market has priced in a rate hike already and if they pull that off the table we could see it dump hard.  Considering that Janet Yellen is likely to be replaced she might not be too concerned about saying something that spooks the market (and it is Halloween today).

We all know that the Fed's don't like to be blamed for any move down in the market, which is why most FOMC days end up with a green close.  Then something a few days later will be blamed for the market rolling over instead of the Fed's.  But if I knew my job was ending by the new president I might just say whatever to dump the market and blame it on that president some how.  Just some food for thought there as we all have become to used too the FOMC meeting closing green and not doing that much "shaking the bulls and bears" lately as it did a lot in the early years of the start of their quantitative easing program.  My thoughts for today are simple, the bulls will likely hold the current levels and try to get a new all time high, but the charts suggests they are too weak to do it today.  Odds favor that happening tomorrow.