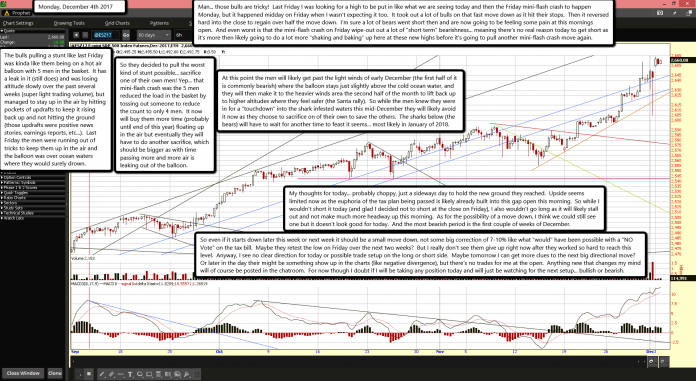 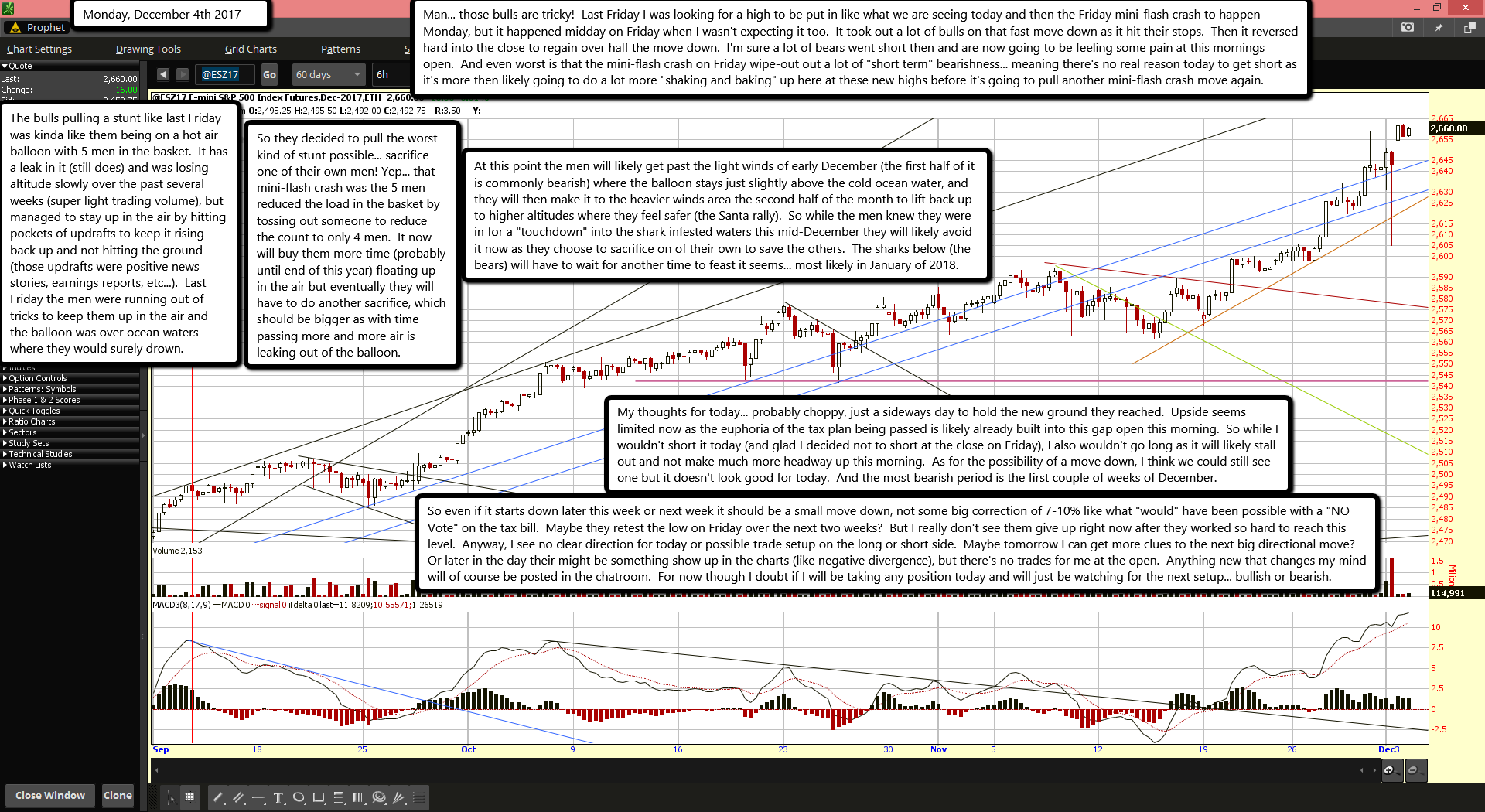 Man... those bulls are tricky!  Last Friday I was looking for a high to be put in like what we are seeing today and then the Friday mini-flash crash to happen Monday, but it happened midday on Friday when I wasn't expecting it too.  It took out a lot of bulls on that fast move down as it hit their stops.  Then it reversed hard into the close to regain over half the move down.  I'm sure a lot of bears went short then and are now going to be feeling some pain at this mornings open.  And even worst is that the mini-flash crash on Friday wipe-out out a lot of "short term" bearishness... meaning there's no real reason today to get short as it's more then likely going to do a lot more "shaking and baking" up here at these new highs before it's going to pull another mini-flash crash move again.

The bulls pulling a stunt like last Friday was kinda like them being on a hot air balloon with 5 men in the basket.  It has a leak in it (still does) and was losing altitude slowly over the past several weeks (super light trading volume), but managed to stay up in the air by hitting pockets of updrafts to keep it rising back up and not hitting the ground (those updrafts were positive news stories, earnings reports, etc...).  Last Friday the men were running out of tricks to keep them up in the air and the balloon was over ocean waters where they would surely drown.

So they decided to pull the worst kind of stunt possible... sacrifice one of their own men! Yep... that mini-flash crash was the 5 men reduced the load in the basket by tossing out someone to reduce the count to only 4 men.  It now will buy them more time (probably until end of this year) floating up in the air but eventually they will have to do another sacrifice, which should be bigger as with time passing more and more air is leaking out of the balloon.

At this point the men will likely get past the light winds of early December (the first half of it is commonly bearish) where the balloon stays just slightly above the cold ocean water, and they will then make it to the heavier winds area the second half of the month to lift back up to higher altitudes where they feel safer (the Santa rally).  So while the men knew they were in for a "touchdown" into the shark infested waters this mid-December they will likely avoid it now as they choose to sacrifice on of their own to save the others.  The sharks below (the bears) will have to wait for another time to feast it seems... most likely in January of 2018.

My thoughts for today... probably choppy, just a sideways day to hold the new ground they reached.  Upside seems limited now as the euphoria of the tax plan being passed is likely already built into this gap open this morning.  So while I wouldn't short it today (and glad I decided not to short at the close on Friday), I also wouldn't go long as it will likely stall out and not make much more headway up this morning.  As for the possibility of a move down, I think we could still see one but it doesn't look good for today.  And the most bearish period is the first couple of weeks of December.

So even if it starts down later this week or next week it should be a small move down, not some big correction of 7-10% like what "would" have been possible with a "NO Vote" on the tax bill.  Maybe they retest the low on Friday over the next two weeks?  But I really don't see them give up right now after they worked so hard to reach this level.  Anyway, I see no clear direction for today or possible trade setup on the long or short side.  Maybe tomorrow I can get more clues to the next big directional move?  Or later in the day their might be something show up in the charts (like negative divergence), but there's no trades for me at the open.  Anything new that changes my mind will of course be posted in the chatroom.  For now though I doubt if I will be taking any position today and will just be watching for the next setup... bullish or bearish.