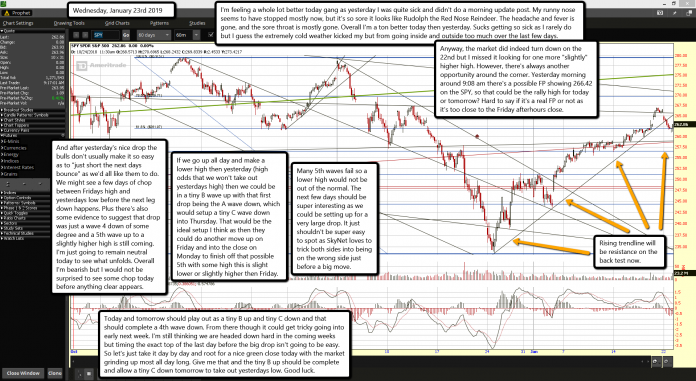 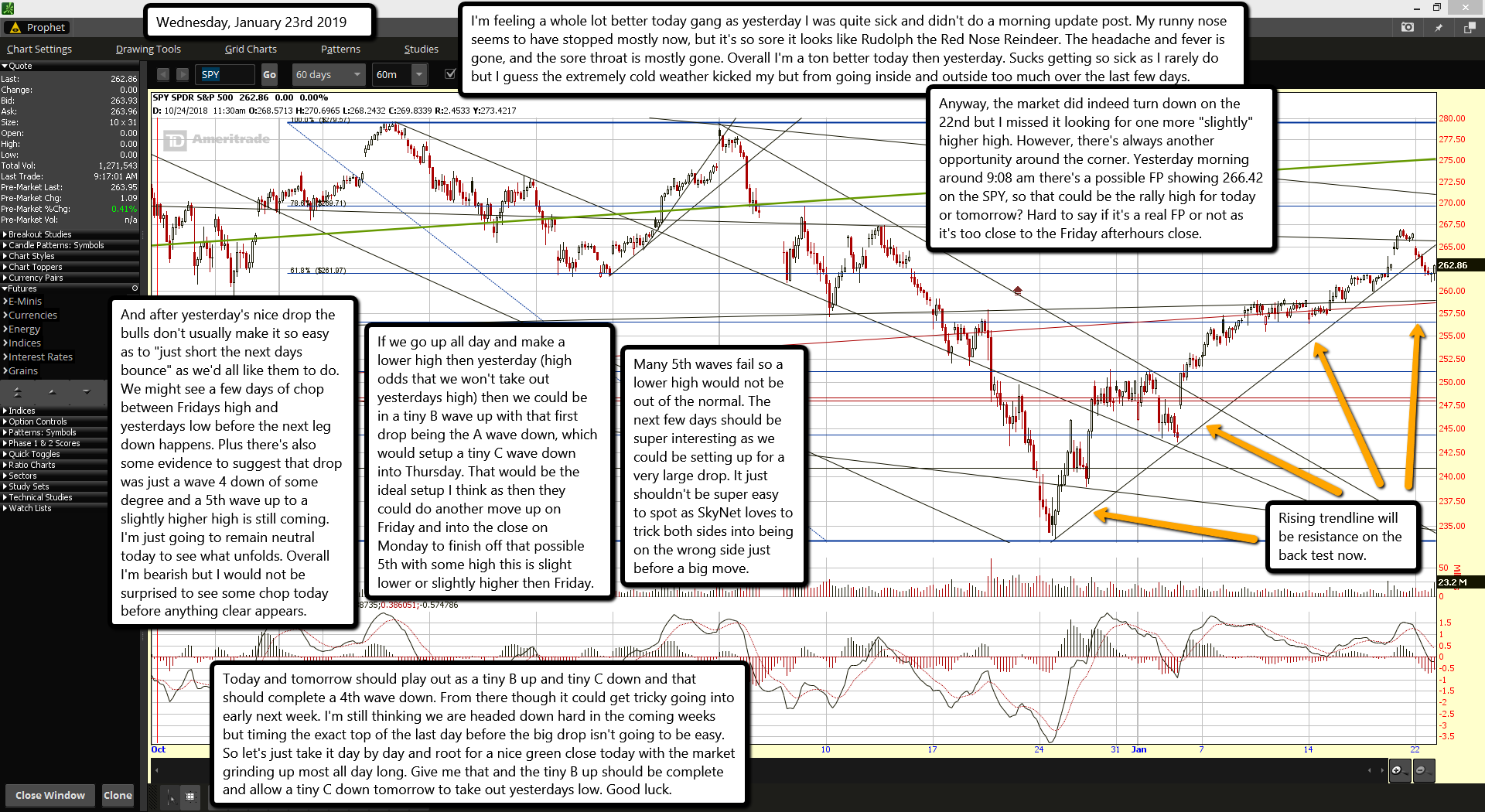 I'm feeling a whole lot better today gang as yesterday I was quite sick and didn't do a morning update post. My runny nose seems to have stopped mostly now, but it's so sore it looks like Rudolph the Red Nose Reindeer. The headache and fever is gone, and the sore throat is mostly gone. Overall I'm a ton better today then yesterday. Sucks getting so sick as I rarely do but I guess the extremely cold weather kicked my but from going inside and outside too much over the last few days.

Anyway, the market did indeed turn down on the 22nd but I missed it looking for one more "slightly" higher high. However, there's always another opportunity around the corner. Yesterday morning around 9:08 am there's a possible FP showing 266.42 on the SPY, so that could be the rally high for today or tomorrow? Hard to say if it's a real FP or not as it's too close to the Friday afterhours close.

And after yesterday's nice drop the bulls don't usually make it so easy as to "just short the next days bounce" as we'd all like them to do. We might see a few days of chop between Fridays high and yesterdays low before the next leg down happens. Plus there's also some evidence to suggest that drop was just a wave 4 down of some degree and a 5th wave up to a slightly higher high is still coming. I'm just going to remain neutral today to see what unfolds. Overall I'm bearish but I would not be surprised to see some chop today before anything clear appears.

If we go up all day and make a lower high then yesterday (high odds that we won't take out yesterdays high) then we could be in a tiny B wave up with that first drop being the A wave down, which would setup a tiny C wave down into Thursday. That would be the ideal setup I think as then they could do another move up on Friday and into the close on Monday to finish off that possible 5th with some high this is slight lower or slightly higher then Friday.

Many 5th waves fail so a lower high would not be out of the normal. The next few days should be super interesting as we could be setting up for a very large drop. It just shouldn't be super easy to spot as SkyNet loves to trick both sides into being on the wrong side just before a big move.

Today and tomorrow should play out as a tiny B up and tiny C down and that should complete a 4th wave down. From there though it could get tricky going into early next week. I'm still thinking we are headed down hard in the coming weeks but timing the exact top of the last day before the big drop isn't going to be easy. So let's just take it day by day and root for a nice green close today with the market grinding up most all day long. Give me that and the tiny B up should be complete and allow a tiny C down tomorrow to take out yesterdays low. Good luck.